The Chicago Teachers’ Pension Fund accumulated nearly $5.4 billion in unfunded obligations over the past ten years. This was an increase of over 10,000%, from $5.1 million in FY2001 to $5.4 billion in FY2010. In three years alone, from FY2008 to FY2010, unfunded liabilities grew by $2.3 billion. Unfunded actuarial accrued liability is the dollar value of accrued liabilities not covered by the actuarial value of assets in the pension fund (see the Civic Federation’s Status of Local Pension Funding report for definitions and explanations of pension calculations). 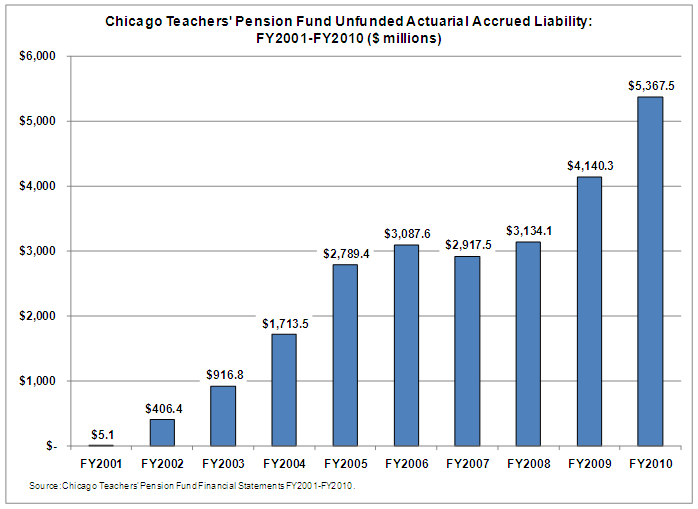 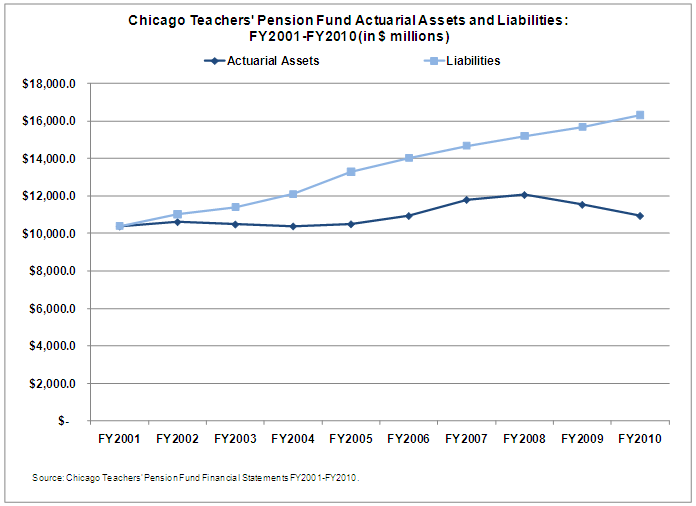 A more detailed breakdown of the causes of the change in unfunded liability each year is available in the annual actuarial valuations of the fund. The table below summarizes the changes as calculated by the fund actuary from FY2001 to FY2010. The single largest contributor to the $5.4 billion increase in unfunded liability is the investment return. For the purpose of actuarial valuation, the fund assumes that it will earn an annual 8.0% investment return. The valuation smoothes the investment gains and losses over a period of four years, such that even if a single year’s market rate of return exceeds the 8.0% assumption, the four-year smoothed return may not. This was the case in FY2010, when the market value rate of return was 14.1% but the four-year smoothed return was -0.4%, reflecting losses in FY2008 and FY2009. Over the ten-year period, the failure of investment returns to meet the 8.0% assumption added $2.3 billion to the unfunded liability.