Second installment property tax bills for Cook County residents are due this week, the earliest due date since at least 1977, according to the elected officials associated with the Cook County property tax process.

Cook County Clerk David Orr’s office released the 2011 Cook County Tax Rates Report on June 26, 2012. The report lists property tax rates for all taxing districts in Cook County and provides sample composite rates for many municipalities. The composite rate is the total tax rate that appears on a tax bill.

The composite tax rate on a typical City of Chicago tax bill will increase from 4.931% last year to 5.455%. This is the second year in a row the rate has increased. Previously, tax rates had not increased between tax year 1998 (payable in 1999) when it grew from 8.843% to 8.872% in tax year 2009. The rise in tax rate does not mean that individual tax bills will necessarily increase, as is explained at the end of this blog post.

The following two graphs show the increase in property tax extensions for the primary governments on a City of Chicago property tax bill from 1990 to 2011 and the decrease in tax rates over the same period until the increase in 2010. Tax rates have fallen despite tax extensions increasing for several governments because the overall taxable value of property has increased more than extensions. For more on how this works, read the Civic Federation’s Tax Extension primer. 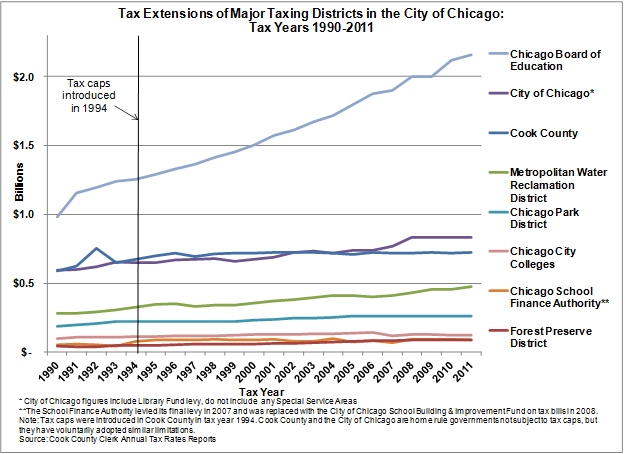 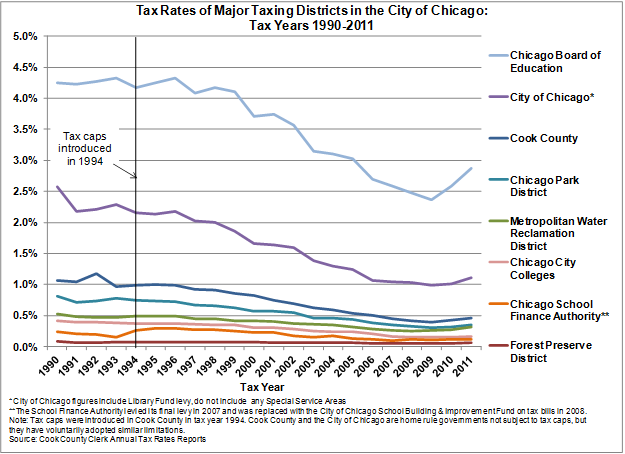 Will your tax bill go up or down? As noted in this blog post, predicting individual tax bills is impossible because they depend not only on the amount of revenue requested by local governments but on changes to the relative value of one property compared to other properties.

None of the Cook County offices involved with property taxation produces an analysis of year-to-year changes in the tax bills of the over 1.8 million real estate parcels countywide, so there is no average or median data available on how many tax bills increase or decrease each year. Some property taxpayers’ bills do decline in a given year as the burden is shifted among properties.