This blog post provides an update on the status of the City of Chicago’s O’Hare International Airport $8.5 billion modernization project in 2020.

The COVID-19 pandemic has seriously depressed air traffic around the world, reducing airline and airport revenues and raising questions about whether the O’Hare modernization project would be delayed. However, Chicago continues to move forward on the plan with construction proceeding on new runways and expansion of the international terminal.[1] The City says it has made expense reductions and identified resources to maintain airport operations and continue improvements without drawing down reserves. The resources used include federal CARES Act funding and $200 million in anticipated savings from a $1.2 billion refunding of airport debt in September 2020.[2]

Overview of the O’Hare 21 Plan

In 2018, the City of Chicago approved a massive $8.5 billion, 30-year plan to substantially modernize O’Hare International Airport called the O’Hare 21 Plan.[3] The plan will close a currently existing diagonal runway to create physical space at the airport’s center, making it possible to expand the airport’s terminals, increase runway capacity and improve existing facilities. It aims to nearly double terminal space and add 22 new gates. At that time, the City projected that the improvements would make it feasible to increase O’Hare’s passenger capacity by 25% to 100 million passengers by 2026. Approximately 60,000 construction jobs were projected to be created by the expansion, along with thousands of other airport-related jobs. The City estimated that the contribution to the regional economy over time would be $50 billion and 460,000 new jobs.[4]

Funding for the O’Hare 21 Plan projects was projected to be borne by landing fees and rents paid by airlines, not by taxes.[5] It will be partially debt-financed. The debt would be repaid from landing fees, terminal rents, parking revenues and other sources. Airlines will pass along fee increases to passengers to pay for the debt and operating costs. The City in 2018 assumed that the total number of passengers at O’Hare would grow from 80 million in 2017 to 100 million or more by 2026, a rate of roughly 3% per year. This was projected to generate sufficient revenue growth to finance the improvements.[6]  While the City has approved $4 billion in debt funding to date, it has not indicated how much of the remaining plan costs will be funded through borrowing. If the entire plan is debt funded, O’Hare’s total debt outstanding could be $14.5 billion by 2022, with the possibility of even more debt if the airlines promote additional projects. Under an estimate at that time of a fully debt financed scenario, O’Hare’s net debt per origination and destination enplanement would rise from $313 in 2017 to $580 in 2022, the highest rate in the nation.[7]

The Impact of the COVID-19 Pandemic on O’Hare Airport

The COVID-19 pandemic has had a severe impact on air travel around the world. O’Hare Airport is no exception. Standard and Poor’s notes that “even if vaccines become available by early 2021 it could take many months to restore confidence in airline travel and restore pre-pandemic volume.”[8] 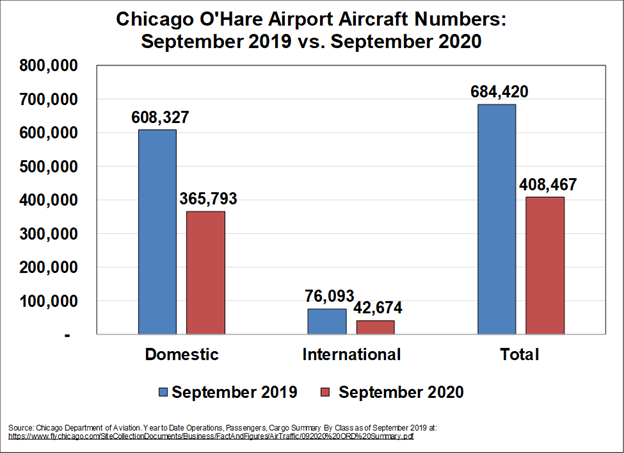 According to a report by the consulting firm Ricondo and Associates that was included as an appendix to the Official Statements for the September 2020 O’Hare Airport bond refunding, enplaned passenger figures for 2020 will only be 37.9% of the number in 2019. They are not forecast to reach 2019 levels until 2024. 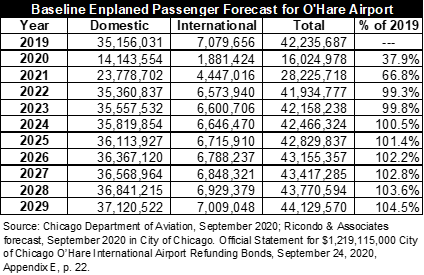 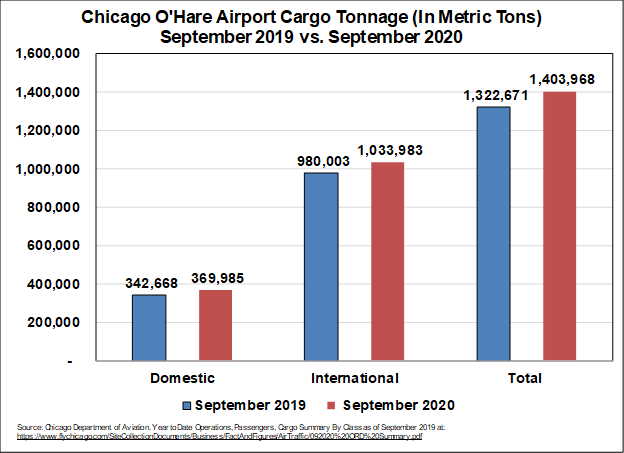 O’Hare airport operations are funded by means of a variety of landing fees, terminal rent, and other fees paid by airlines, as well as non-airline sources, such as charges for parking and revenues from concessions in the terminals. The amount that the airlines pay each year is established at each airport on a residual basis: the airlines are charged the amount that is needed to pay for operating expenses and debt service after taking into account non-airline revenues.[9]

The City’s Response to Revenue Reductions

In response to the economic impact of the coronavirus pandemic on O’Hare Airport’s finances, the City says it has identified $519.7 million in measures that will stabilize the airport’s budget and provide some assistance to the airlines and airport concessionaires.

In addition the City has implemented a hiring slowdown, limited overtime, deferred certain capital projects and limited non-essential travel expenses.  As a result of these actions as well as using savings from the refunding of senior lien revenue bonds, increases on annualized landing fees by 9.4% and also by 18.8% for the 6-month period of July 1 to December 31, 2020, the City reports that it will not need to draw on reserves to meet in FY2020 budget requirements.

Based on their analysis of O’Hare revenues prepared for the Official Statement, Ricondo and Associates concluded that revenues would be sufficient to comply with rate covenants in the senior lien indenture and that airline costs would remain reasonable.[14]

The city estimated that the refinancing would save approximately $200 million. It did not extend maturities or increase debt service costs; the final maturity remains at 2040. The majority of these savings will be used in 2021.[15]  A summary of the bond issue is shown below.

Responding to the economic impact of the coronavirus pandemic on airline traffic, the rating agencies issued several credit actions and information bulletins in 2020.  As of December 2020, credit ratings for O’Hare airport bonds are show below.

Fitch assigned an A rating to O’Hare International Airport senior lien revenue refunding bonds, senior lien revenue bonds and passenger facility bonds with a negative outlook in September 2020. The negative outlook reflected the adverse economic and financial aspects brought about by the COVID-19 pandemic. If airport activity does not increase in 2021, Fitch reported that it would likely downgrade all of the airport’s debt obligations.[16]

Fitch assigned an A credit rating with a negative outlook in September 2020 for the City’s $1.2 billion in general airport senior lien revenue refunding bonds.[17]

In March 2020, Standard and Poor’s revised the outlook for O’Hare International Airport senior lien revenue bonds from stable to negative based on the severe economic impact caused by the coronavirus pandemic; the A credit rating was affirmed.[18]

In March 2020 Kroll issued a ratings watch for debt held by a number of U.S. airports. The Chicago airport debt included on the list were O’Hare Airport senior lien revenue bonds and Midway Airport second lien revenue bonds. The outlook for both issues was changed from stable to a watch-developing status. The change reflected comments over the revenue implications of sharp declines in airport activity due to the coronavirus pandemic.[21]

Moody’s Investor’s Services affirmed its A2 rating on $1.1 billion of General Airport Senior Lien Revenue (GARB) bonds and $419 million of passenger facility charge-backed bonds while revising the outlook from stable to negative. The change in outlook reflects concerns over the economic impact of the coronavirus epidemic in early November 2020.[24]

Moody’s also affirmed its Baa1 rating on $234 million in O’Hare’s customer facility charge revenue bonds and approximately $272 million of the subordinate TIFIA loan with a stable outlook on November 9, 2020. The rating agency noted that O’Hare has been negatively impacted by the COVID-19 epidemic. Through July 31, 2020 year-to-date enplanements had declined by 61% from the previous year, or 9.5 million; customer facility collections were likely to decline by a similar amount. However, Moody’s stated that O’Hare Airport should have sufficient resources to cover approximately $28 to $32 million in debt service costs with Customer Facility charge reserves and CARES Act funding if revenue shortfalls emerged. O’Hare also has adequate liquidity with an additional two years of cash and other liquid resources if needed; $48.6 million in funds have been pledged under the indenture of the Customer Facility Charge (CFC) bonds as of August 2020 and there is an additional minimum of $20.0 million within the CFC bond stabilization fund. [25]

[3] Fran Spielman, “The City Council on Wednesday approved a plan so important to Chicago’s future - and the mayor’s - Emanuel rushed out to O’Hare to immediately sign new airline agreements,” Chicago Sun-Times, March 28, 2018.

[4] City of Chicago O'Hare International Airport Use and Lease Agreement Presentation to the Civic Federation, March 22, 2018.

[5] Carole Brown, Chief Financial Officer of the City of Chicago, Presentation to the Civic Federation Board of Directors, March 22, 2018.

On April 21, 2021, the City of Chicago adopted Substitute Ordinance 2020-5902 , which requires the Department of Finance to publish monthly...

On April 21, 2021, the City of Chicago adopted Substitute Ordinance 2020-5902 , which requires the Department of Finance to publish monthly...