Because the judiciary in Illinois is not subject to the Freedom of Information Act (FOIA), data disclosure and responses to requests for information are discretionary, despite the fact that individual case files are a matter of public record and are open to any member of the public for inspection. Illinois differs from the majority of other states in this respect: 44 other states in the U.S. either require or permit disclosure of data regarding administrative court functions, either via a freedom of information law or a judiciary-specific statute or rule. Without access to aggregate information, it is difficult for researchers, the media and justice system stakeholders to evaluate court systems and hold public officials accountable.

This summary examines current practice in Illinois and how Illinois compares to other states on required public disclosure of court data.

Treatment of the Judiciary in the Illinois Freedom of Information Act

These annual statistical summaries provide helpful information about the overall number of cases within each county and high-level metrics and outcomes, as well as information about how much money flows through each Clerk of the Circuit Court and how it gets disbursed. In order do more detailed evaluation beyond these summaries, however, one would need to submit a special request to the circuit court clerk of the county. Some circuit court clerks might provide the information if it is available, but in other instances a circuit clerk could simply state they are not subject to FOIA and therefore not obligated to provide the information requested.

A handful of circuit court clerks in Illinois provide statistical information on their websites similar to that reported in the Illinois Supreme Court’s annual reports. A scan of the 25 most populous counties in Illinois (with population above 55,000 and the smallest of these being Whiteside County) found that the following circuit clerks provide case statistics on their websites:

These high-level case filing statistics are only useful for understanding total case volumes, and do not provide enough information to do more detailed analysis.

Illinois’ largest county, Cook County, has a process for members of the public to submit requests for Cook County Circuit Court data in writing to the Chief Judge. If the request is approved, the Chief Judge directs the Clerk of the Circuit Court to process the data request. Responses to requests for information are discretionary. If a request is for a large amount of data, a response can take months and the Clerk may charge a fee. The Cook County Chief Judge also reinstituted a bulk data dissemination policy in January 2020 that allows individuals to request bulk electronic records (meaning all or significant subsets of entire data files maintained as a computerized court record) following a legal challenge by the Chicago Tribune related to access to criminal case data. The new policy allows access to electronic bulk data, but these requests reportedly can take up to six months.

The Cook County Chief Judge also began publishing pretrial data dashboards about the jail composition and outcomes of bond court hearings in late 2017. However, the dashboards have not been updated since 2019 due to a transition in the Clerk of the Circuit Court’s case management system that requires reprogramming of bulk data in the new system. Cook County is the only county in Illinois that has published this kind of analysis of pretrial data.

How Illinois FOIA Law Compares to Other States

This review found that Illinois is generally an outlier when it comes to required data disclosure from the judicial branch. Nearly all other states’ probation and pretrial programs and financial information are subject to open records laws. In many states, probation programs are operated under an executive branch agency such as the Department of Corrections, rather than a judicial branch agency as is the case in Illinois.

These findings are detailed in the table below. 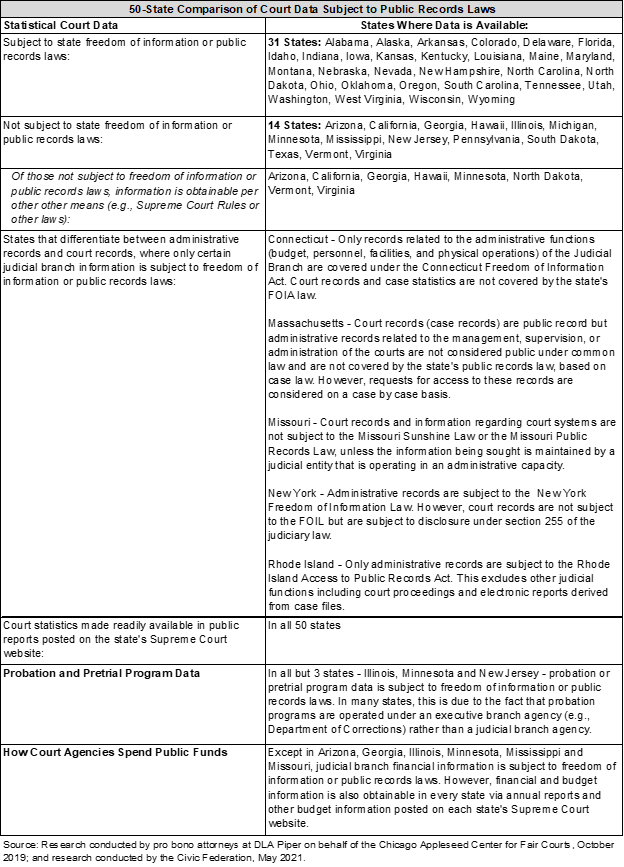 Regardless of their freedom of information laws, all 50 state courts publish annual reports with case statistics on their websites. Most of these statistics are high-level case statistics such as the number of case filings and case dispositions. Some include performance measures such as clearance rates, time to disposition and age of pending cases. Some states such as Massachusetts publish extensive statistics and interactive dashboards.

Several state courts have processes in place for members of the public to submit requests for information or rules that govern release of information, either in addition or in place of open records laws. The following examples provide further details about processes in place in a variety of states.

Making the Case for a Change to FOIA

There is a strong case to be made for subjecting the Illinois Judiciary, or at least certain functions of the judicial branch, to the Illinois Freedom of Information Act. There are many administrative or executive type functions and programs within the judicial branch in Illinois that arguably should not be exempt from FOIA including the record-keeping functions of circuit court clerks and administrative programs that fall under the Circuit Courts including probation and pretrial programs. Within the Office of the Chief Judge of Cook County, for example, there are 15 different non-judicial offices.

While there are other methods of facilitating disclosure, such as Supreme Court Rules or voluntary release policies, the Freedom of Information Act is the most effective and enforceable way to ensure a fair and standard process for any member of the public to obtain information. Enabling information disclosure through FOIA would create a standardized and clear process for submitting requests, as well as require a response to be provided within a specific period of time (typically within 5 to 10 days). The FOIA statute includes enforcement mechanisms by providing the right to appeal the denial of a FOIA request to the Public Access Counselor of the Attorney General’s Office or to the Circuit Court. Ideally each court entity would clearly outline procedures and contact information for submitting requests to a FOIA officer on their website.

Public disclosure of court data and administrative records through FOIA could specify exemptions in order to protect sensitive information. Commonly exempted records in other states include: judges’ memos, notes, legal research and internal communications; juvenile records; adoption records; records that have been sealed or expunged; personal information contained within records including social security numbers and drivers’ license numbers; and other types of sensitive or private information.

Based on information available in other states and information that would be considered administrative, rather than case records, the following are several examples of court information that should be obtainable through a FOIA requests:

After taking office, Clerk Martinez worked with State Senator Michael Hastings to reintroduce the same bill in the 102nd General Assembly as Senate Bill 583. However, the bill was substantially weakened through an amendment, Senate Committee Amendment 1, which removes all references to FOIA and instead adds the Clerk of the Circuit Court of Cook County to Section 3a of the Local Records Act. The change came in response to opposition from the Illinois Clerks of Courts Association to making a circuit clerk subject to FOIA. This amendment would make reports and records of the obligation, receipt and use of public funds of the Clerk of the Circuit Court of Cook County open to public inspection. However, this would not provide access to any other operational information or records held by the Clerk of the Circuit Court, or to statistical data compiled from court records.

Using the Local Records Act to achieve similar transparency goals as FOIA for the Cook County Circuit Court Clerk’s Office is an inadequate workaround. The Local Records Act was established in the early 1960s to regulate the preservation or disposal of the public records of all units of Local Government in Illinois. In contrast, the purpose of the Freedom of Information Act, first enacted in 1984 and amended in 2010, is to provide public access to government records. The Local Records Act does not provide the same protections as FOIA such as the right to appeal the denial of a FOIA request and the right of an individual to judicially contest a failure to produce records. It has no effective mechanism of enforcement and it only requires making records available on premises, not providing records to the requestor. Furthermore, Section3a of the Local Records Act that is amended in SB583 SA1 was only intended to cover records prepared prior to July 1, 1984. All records thereafter were to be covered under provisions of the Freedom of Information Act.

Clerk Martinez’s reversal on a commitment to FOIA-level transparency is highly disappointing. The Civic Federation, along with the Chicago Appleseed Center for Fair Courts, Chicago Council of Lawyers, Better Government Association and the Chicago Community Bond Fund, oppose the bill as amended. In a letter sent to legislators on May 3, 2021, our organizations explained our concerns about the amended bill and urged reconsideration of the original bill as introduced.