Throughout the United States there is a bipartisan consensus that too many people are incarcerated. The concerns focus on the impact on inmates’ families and communities, the loss of productive human potential, racial inequities and high financial cost. Despite recent reductions, Illinois still holds nearly 40,000 adults in its prison system, with significant fiscal impact.

Illinois spends an estimated $22,000 in operational expenses to incarcerate one person for a year.[1] This figure rises to $37,000 when accounting for capital costs and employee benefits, including pensions. The total proposed FY2021 General Funds expenditure for the Illinois Department of Corrections (IDOC) is about $1.5 billion, most of which is for the operation of prison facilities. IDOC operates 25 correctional centers, two treatment centers (Elgin and Joliet) for inmates with severe mental illness, two life skills re-entry centers and four adult transition centers.

Research shows the decline in the prison population since 2013 can be attributed to decreased crime rates, reduced enforcement of property and drug crimes, especially a decline in drug arrests by the Chicago Police Department, and lower recidivism rates. The decrease is not attributed to shorter lengths of stay in prison. In fact, the average length of stay has increased in recent years for crimes within the same offense class.

Employee headcount has continued to rise during the same period as well. Headcount estimated in FY2020 represents an increase of 1,280, or 11%, over FY2011.

The following chart shows adult inmate population, General Funds expenditures and employee headcount for IDOC in the ten-year period between FY2011 and FY2020. 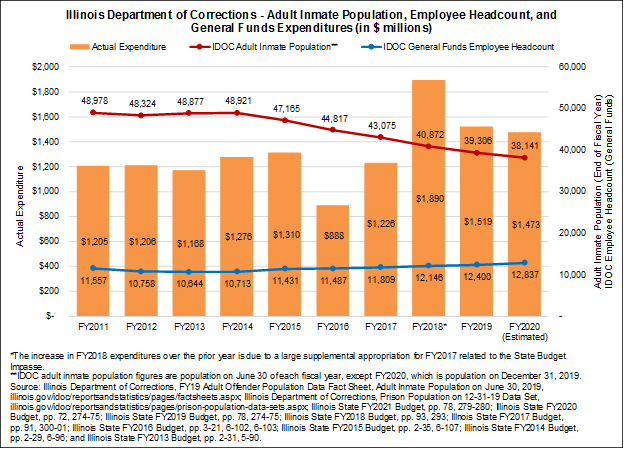 While Illinois prisons are starting to see fewer prison inmates, cost reductions are difficult to make for a number of reasons. Prison population declines do not always lead to immediate operational expenditure reductions due to safety and legal concerns. A minimum number of guards is needed to safely staff a given facility. A significant portion of IDOC’s expenditures are fixed costs, meaning large drops in population are necessary to make major cost-saving changes, such as consolidating facilities. Moreover, experts caution that more social services will be needed to address the needs of the population that would otherwise be incarcerated. Community supervision (e.g., probation, parole, problem solving courts and the Adult Redeploy Illinois program) require investment in community service providers who provide programming to reduce recidivism.

IDOC is still fulfilling the terms of a settlement reached in May 2016 in the case of Rasho v. Baldwin, which required overhauling of the way mental health services are delivered in Illinois prisons. Appropriate staffing levels, specifically for psychiatrist positions, remains an issue IDOC is still addressing. Additionally, IDOC must comply with the terms of a consent decree reached in January 2019 in the case of Lippert v. Baldwin, to improve the medical and dental care provided to inmates. The agreement requires the State to provide qualified medical personnel and improved clinical facilities and to implement an electronic medical records system.

Efforts to Reduce the Prison Population

Soon after taking office in 2015, then Governor Rauner formed a bipartisan commission to find ways to safely reduce Illinois’ adult prison population by 25%—from 48,278 to 36,209—by 2025. The Illinois State Commission on Criminal Justice and Sentencing Reform issued 27 recommendations in January 2017; as of mid-November 2018, six had been adopted through changes in policy or state law and work had begun to implement 13 other recommendations.[2] Lawmakers have not acted on the more controversial proposals, such as lowering mandatory minimum sentences for felonies and raising the threshold for shoplifting to be considered a felony. Cook County State’s Attorney Kim Foxx raised the shoplifting threshold from $300 to $1,000, prosecuting shoplifting of retail value under $1,000 as a misdemeanor, but the policy has been met with some criticism.

The Rauner administration started two IDOC facilities dedicated to job retraining programs for offenders about to reenter society—the Kewanee and Murphysboro Re-Entry Life Skills Centers. The facilities’ goal is to reduce recidivism and thereby lower the prison population further. While the re-entry program is expensive, at a cost of $181 per inmate per day compared to $72 per inmate per day at other Illinois prisons, it is less expensive in the long-run than the cost of recidivism. A report by the Illinois Sentencing Policy Advisory Council estimated that the average cost associated with one recidivism event is $151,662, and that over a five-year period recidivism would cost Illinois $13 billion.

Governor J.B. Pritzker, who took office in January 2019, has committed to criminal justice reforms. The Governor created an office of Justice, Equity and Opportunity (JEO) headed by Lieutenant Governor Juliana Stratton to centralize the State’s criminal justice efforts. The JEO Initiative released its first annual report in January 2020 highlighting accomplishments from the previous year. These included the passage of House Bill 94 to expand availability of sentence credits for incarcerated people who participate in rehabilitative classes and activities. The JEO’s goals for 2020 include supporting re-entry services for individuals returning to the community such as improving housing options for those who have been justice-involved.

Members of the Illinois General Assembly met to hear from experts about sentencing policy reforms as a criminal justice subject matter hearing on February 13, 2020. Advocacy organizations such as the ACLU of Illinois are urging State leaders to continue working on the recommendations of the Commission on Criminal Justice and Sentencing Reform.

Amid the COVID-19 outbreak in Illinois, civil rights organizations have called on Governor J.B. Pritzker to release certain prisoners, including prisoners due to be paroled within 120 days, those with viable clemency petitions, inmates who are pregnant, postpartum, or living with their infants, and inmates with health conditions, including the elderly. The Cook County Jail had released a few jail detainees with health risks as of March 18, 2020, and was considering further releases. The majority of jail detainees, however, are pretrial defendants who have not yet been found guilty, whereas prison inmates have been convicted and sentenced.

The Civic Federation supports efforts to reduce the number of people in prison to achieve widely acknowledged social benefits and meaningful cost reductions. The Federation urges the Governor and General Assembly to continue to implement reforms that safely and legally reduce the Illinois prison population.