Despite the General Assembly’s goal to pass a budget for FY2011 and adjourn by May 7, 2010, legislators headed home after the session ended with no budget and no clear path out of the State’s current woeful financial situation.

Although multiple appropriations bills, revenue bills, pension borrowing plans and emergency budget bills were deliberated and voted on in both houses of the legislature, none was sent to the Governor. Now with roughly six weeks left in the fiscal year it is still unclear how the State will cope with a deficit that still totals at least $12.8 billion under the both appropriation bills being considered in the General Assembly.

The Illinois State Senate approved appropriations bill HB0859, which totals approximately $26.0 billion in General Funds appropriations. The bill does not account for making all the necessary transfers for debt service and other statutory requirements, estimated to total at least $4.2 billion. The spending bill passed by the Senate also does not include the required contribution to the retirement systems, which totals $ 3.8 billion after the moderate savings are calculated from the pension reforms passed earlier in session.

Legislators in the Illinois House of Representatives deliberated and took several votes on another appropriations bill, SB1211, but failed to pass the measure, which has several amendments still pending. The General Funds appropriations in SB1211 similarly totals $26.0 billion. The legislators in the House also considered several plans to borrow to pay the pension contributions (SB3514, SB49) but could not muster enough votes to authorize additional borrowing.

The Governor’s proposed FY2011 budget totaled only $24.8 billion in General Fund appropriations before transfers. According to the Governor’s budget staff and the summary materials provided by legislative leaders, the total appropriations of $26.0 billion included in SB1211 and HB0859 do not include the following required transfers: 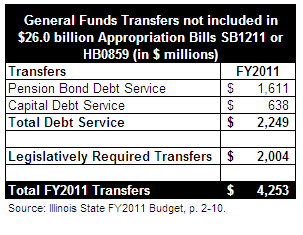 The transfers required to pay debt service cannot be altered by the State and will be paid through continuing appropriation authority regardless of whether the amounts are appropriated by the legislature. The Governor’s budget proposal included reducing the legislatively required transfer by $308 million by cutting the amount of income tax revenue that the State shares with local governments by 30%. It remains to be seen whether the General Assembly will authorize this cut to local funding.

The required General Funds appropriations to the State’s retirement systems are also not included in either of the appropriations bills. The retirement systems were due $4.1 billion in FY2011 prior to the enactment of SB1946, which created another tier of pension benefits for new state employees only. The savings from this reform are expected to reduce next year’s contribution to $3.8 billion. 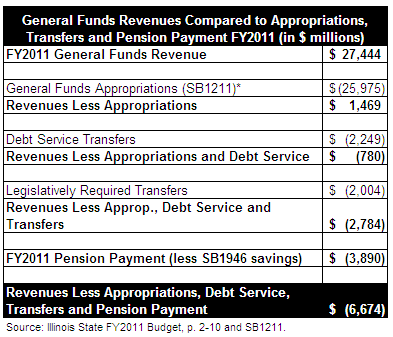 The State also plans to carry forward a deficit of $5.9 billion from FY2010 on top of the $6.7 billion general funds deficit in the chart above. If enacted as currently amended, both of the pending FY2011 appropriations bills would result in at least a $12.8 billion deficit, similar to the amount previously estimated by the Civic Federation prior to the release Governor’s budget proposal on March 10, 2010.

As also mentioned previously in this blog, the Governor suggested that the State might try a new form of pension borrowing to fund its contributions to the retirement systems in FY2011 and reduce next year’s deficit at the cost of future years’ repayment. The private placement pension notes were considered in two House amendments proposed to SB3514.

The first two amendments proposed to the bill were new strategies of pension borrowing, including selling debt to the pension funds themselves or selling pension bonds and providing a portion of the bonds to the pension funds as part of the State’s payment. Neither concept gained much support. A third amendment, which mirrored the pension borrowing proposal in SB49, included issuing back-loaded pension obligation bonds rather than private placement debt to make the FY2011 contributions to the retirement systems. The $4.1 billion in new pension debt would have been paid back over eight years and only required small amounts of interest in the first few years with payments ballooning in the later years of the deal. Ultimately, this borrowing was projected to cost the State roughly $1 billion in total interest. However, the proposal fell 13 votes short of the three-fifths majority needed in the house to issue new debt under the debt provisions of the Illinois Constitution.

The Senate also passed an increase in the cigarette tax by $1 per pack that will bring in State revenues estimated to total $200 million and reap an additional $120 million in federal matching dollars through Medicaid reimbursements. Both houses of the legislature included new authority of the Governor to securitize the State’s annual payment from the State’s tobacco liability settlement over the next 19 years (HB2428 and SB3660). The tobacco settlement securitization would reduce program funding by the average annual payment of $300 million in favor of one-time revenues in FY2011 totaling $1.8 billion. The Senate’s emergency budget act also would allow the Governor to delay making the required pension payment until adequate revenues are available and to unilaterally change the budget through lump sum appropriations. Although authorization for the Governor to defer the State’s pension payment passed the Senate with a small majority, it remains to be seen what action the House will take.

The General Assembly has yet to release any timetable for the House or the Senate to reconvene before the end of May. Under the Illinois Constitution, after May 31, 2010, a supermajority vote will be needed to send the FY2011 budget to the Governor for his signature. The state fiscal year ends on June 30, 2010.