Earlier this week the Institute for Illinois’ Fiscal Sustainability at the Civic Federation released its analysis of Governor Pat Quinn’s proposed FY2012 operating budget. The report found that the proposed FY2012 budget had a General Funds operating shortfall of $2.4 billion due to increased spending and overestimated revenues.

The Civic Federation opposed the Governor’s proposed budget due to these findings and other issues it opposed in the budget including the reliance on a very expensive borrowing plan to close the budget gap and pay down other state liabilities.

Despite opposing the overall budget proposal, the Federation supported the Governor’s plan to pay the State’s annual contributions to the pension funds out of the operating budget for the first time since FY2009. The State’s total pension-related expenditures in FY2012, including both the $4.6 billion statutory contribution and debt service, will be $6.2 billion or 17% of all General Funds expenditures.

The debt service component of the State’s pension cost dramatically increased in FY2010 and FY2011 due to additional borrowing to make its required annual contribution. As previously discussed on this blog, the debt service owed on the more than $7.0 billion in bonds sold over the past two fiscal years will continue to hamper the budget until after FY2019 when the last of the new pension bonds are retired. The analysis of the Governor’s proposed budget showed that in FY2011 the State’s outstanding General Obligation debt for pensions surpassed capital purpose debt. Due to the issuance of $3.7 billion in new Pension Obligation Bonds, State’s total General Obligation debt dedicated to pension borrowing will total $16.3 billion at the end of FY2011 and capital debt will total $13.2 billion. This leads to the debt per capita in Illinois totaling $2,360.60, of which $1,257.20 is made up of pension bonds and $1,195.50 is for bonds used for capital investments.

While the State’s debt-related pension costs are increasing due to additional borrowing, the required annual contributions to the retirement systems also continue to grow.

The following excerpt from the analysis of the Governor’s proposed FY2012 budget describes the impact of these increases in pension costs on the State’s General Funds budget. It also includes an overview of additional pension reforms currently under consideration in the General Assembly intended to bring down the long-term cost of the program.

In FY2012, the State plans to pay its statutorily required General Funds pension contributions from operating funds. In FY2010 and FY2011, the contributions were made through the sale of Pension Obligation Bonds (POBs).

The State is also obligated to make interest and principal payments on pension-related bonds. In addition to the POBs sold in FY2010 and FY2011, Illinois issued $10 billion in pension bonds in FY2003. Of the total proceeds of the 2003 bond sale, $2.2 billion was used to make required annual contributions in FY2003 and FY2004 and $7.3 billion went to pay down unfunded liabilities. It should be noted that pension contributions may be changed by statute, but debt payments on general obligation bonds such as POBs are guaranteed by the full faith and credit, which means they must be paid before any other expense or liability of the State. 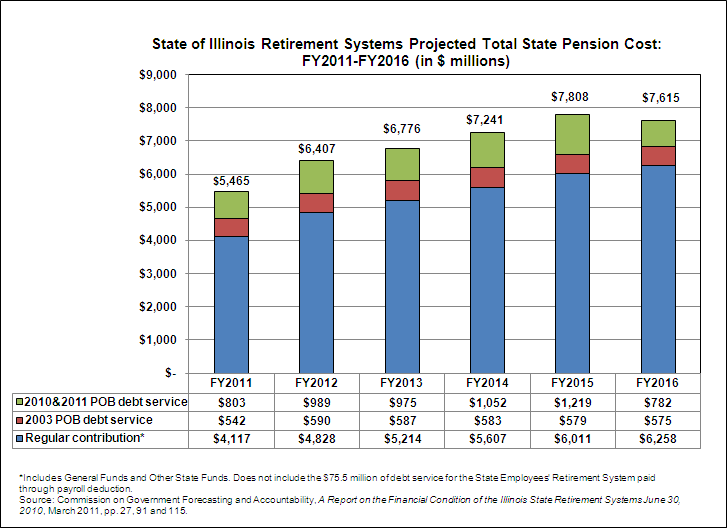 By 2045, when the retirement systems are required to be 90% funded, total annual state contributions (not including debt service) are expected to reach $18.9 billion.

The pension reform legislation enacted in April 2010 contained major reductions in pension benefits for newly hired state employees, including higher retirement ages, a cap on the maximum pensionable salary and lower cost of living adjustments. The legislation did not affect the pension structure for existing employees. The FY2012 budget states that additional reforms are needed but does not propose a specific plan. In the FY2010 budget, the Governor proposed increased contributions for existing state employees, but no action was taken by the General Assembly.

A pension reform bill introduced in the General Assembly in January 2011 is based on a proposal by the Civic Committee of the Commercial Club of Chicago. The proposal would not affect benefits already earned by existing employees. Under the proposal, existing employees would be given three options: stay in the state’s traditional defined benefit pension plan but pay significantly higher contributions; switch to the less generous defined benefit plan for new employees; or enter a defined contribution plan with a matching state contribution.

In addition, the State would make a contribution to the retirement systems in an amount determined to be sufficient to pay down by the end of FY2045 the unfunded liability attributable to service completed by the end of FY2012, calculated using FY2012 wage levels. Existing employees who choose the traditional plan would be responsible for additional contributions sufficient to pay down the portion of the unfunded liability at the end of FY2012 attributable to wage increases after the effective date of the bill. Existing employees who switch out of the traditional plan would have their benefit levels frozen at their salary level at the time they switch plans.

An actuary for the General Assembly’s Commission on Government Forecasting and Accountability concluded that it was not possible to determine the overall financial impact of the bill partly because of difficulties in calculating the amount of unfunded liability as of a specific date attributable to salary increases after that date. Without including those additional payments, participants in the traditional plan would pay between 13.5% and 36.5% of their salaries to stay in the traditional plan.

The State’s labor unions are expected to oppose such changes. Council 31 of the American Federation of State, County and Municipal Employees (AFSCME) has stated that the Illinois Constitution prohibits any legislation to reduce benefits or force increased contributions.

The Illinois Constitution provides that membership in any pension system in the State is an enforceable contractual relationship and that members’ benefits “shall not be diminished or impaired.” In support of its position, AFSCME Council 31 cited a recent legal analysis by the Chief Legal Counsel to the Illinois Senate President. Competing legal opinions have argued that the constitutional prohibition applies only to benefits already accrued from an employee’s prior service and not to benefits that an employee hopes to earn in the future.

For more information on the State’s retirement systems and debt burden see the full analysis of the Governor’s proposed FY2012 budget here.