A bipartisan group of Illinois lawmakers has signed onto a new pension reform proposal designed to reduce the State’s massive pension costs.

House Bill 3411, co-sponsored by 20 Republican legislators and 11 Democrats, was introduced in the Illinois House on February 26, 2013. Senate Bill 35 was amended a day later to mirror HB3411.

HB3411 includes many of the changes proposed in House Bill 6258 in the last General Assembly and is expected to generate similar savings. At a press conference on February 27, 2013, supporters of HB3411 said the proposal would reduce the State’s total annual pension contributions in FY2014 by approximately $1.9 billion, or 28%, and lower its unfunded pension liability to $67 billion from $95 billion.

The new bill does not contain one of the most controversial elements of HB6258: a gradual shift of normal (current service) pension costs from the State to local school districts, universities and community colleges for employees hired before January 1, 2011 (known as Tier 1 employees). Some legislators were concerned that a pension cost shift could lead to property tax increases for their suburban and downstate constituents.

However, the cost shift was not a major contributor to State savings under HB6258. An actuarial review of the bill’s impact for TRS, the State’s largest pension fund, showed that HB6258 would generate $114.2 billion in savings from FY2014 through FY2043; of that total, only $6.4 billion was due to the cost shift. Here are the actuarial reviews for TRS, SURS and SERS.

Both the new bill and HB6258 shift costs for newly hired TRS and SURS employees (Tier 3 employees) to local employers. HB6258 included a cash balance plan for these employees, funded by local employers. Under HB3411, local employers would contribute to a “hybrid” plan that has components of a defined benefit and a defined contribution plan. A defined benefit plan is a traditional pension plan in which the employer guarantees a specific benefit upon retirement. In a defined contribution, or 401(k)-type, plan, the employer only guarantees a specific contribution. Employees hired on or after January 1, 2011 (Tier 2 employees) are given the option of participating in the hybrid plan. Benefits for these workers were reduced by legislation enacted in 2010.

The largest savings under both HB6258 and HB3411 are related to changes in the automatic annual benefit increase. Current retirees and Tier 1 employees receive annual compounded increases of 3%. Under the reform proposals, these automatic increases would apply only to the first $25,000 of a pension for those who do not receive Social Security ($20,000 for those who do). That would limit the annual increase to $750 (or $600). In addition, retirees would receive no annual increase until they reach age 67 or five years after they retire.

Any comprehensive pension reform is likely to face legal challenges that could delay implementation. The Illinois Constitution states that membership in any public pension or retirement system “shall be an enforceable contractual relationship, the benefits of which shall not be diminished or impaired.”

In order to lower pension costs without violating this constitutional provision, Senate President John Cullerton has argued that the State must offer employees some kind of contractual consideration in exchange for reduced benefits. Senator Cullerton’s pension proposal, Senate Bill 1, incorporates this approach.

At the press conference on February 27, Representative Elaine Nekritz said that HB3411 is constitutional because it provides for the pension systems’ survival in exchange for reduced benefits. In March 2012, the Board of Trustees of TRS concluded that the fund was imperiled because it could no longer rely on the State to make its required contributions.

House Speaker Michael Madigan has scheduled a floor debate on pension changes on February 28. It is not clear what role, if any, HB3411 might play in the debate.

The table below compares the major components of HB3411 and HB6258. (Click to enlarge.) 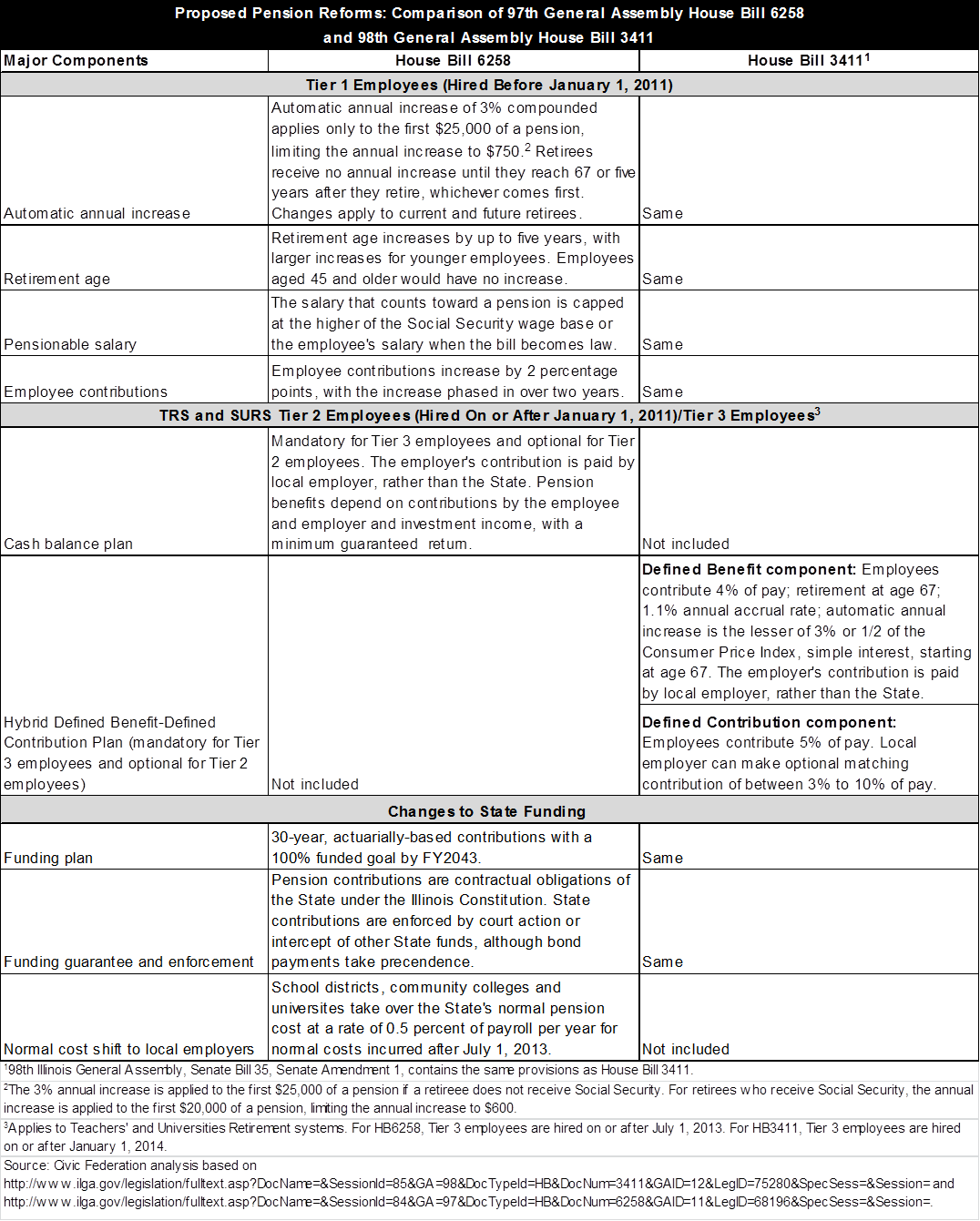