The State of Illinois’ inadequate funding of its employee retirement systems has already contributed to downgrades in the State’s credit ratings and will continue to affect rating decisions for many years, according to a new report by Moody’s Investors Service.

The report comes as Illinois’ Pension System Modernization Task Force is preparing to issue recommendations to the General Assembly to reform the State’s pension plans. Governor Pat Quinn had urged sweeping pension reforms in his FY2010 budget proposal in March of 2009, including reducing benefits for new state employees, but the proposed changes were not enacted by lawmakers. The Task Force began meeting in June of 2009 and was scheduled to make its recommendations by November 1. It has not yet issued a final report.

Moody’s cites Illinois as a case study of a state that has consistently paid less than the amount needed to fund its pension plans. While many public sector pension funds are under pressure now because of significant investment losses in 2008 and early 2009, these pressures will be greater for governments like Illinois “that entered this cycle with marginal funding levels,” Moody’s said. To see a copy of the report, click here.

The combined funded ratio of the state’s five pension systems—a measure of the adequacy of assets available to pay employee benefit claims—stood at 49% in 2003, according to the report. The most recent audited financial statements showed that the pension systems had a funded ratio of 54.3% on June 30, 2008. An unaudited estimate of the funds’ financial condition as of December 31, 2008 showed a funded ratio of 40% and unfunded liabilities of $73.4 billion. The chart below shows the funded status of the retirement systems from 2003 through 2008. 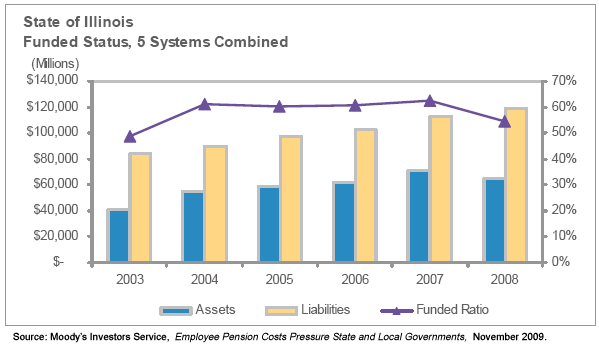 In contrast to the financial condition of Illinois’ pension plans, Moody’s said that on average state pension systems have had funded ratios of about 85% in recent years. Illinois’ “comparatively weak pension funding was a significant factor” in Moody’s decision to downgrade the State’s rating in April of 2009 to A1 from Aa3, the report said.

The report points to West Virginia—previously one of the states or commonwealths with the worst-funded pension systems—as a government that is viewed favorably from a credit rating perspective because of recent improvements in pension funding practices. (Puerto Rico has the lowest funded ratio by far at 19%). West Virginia had a history of large unfunded pension liabilities because of years of inadequate contributions and conservative investment practices that did not allow stock purchases until 1998. The funded ratio for the Teachers’ Retirement System was below 25% in 2005, Moody’s said. However, West Virginia took aggressive steps to reduce its unfunded liabilities, including using surplus revenues and proceeds of tobacco revenue bonds to increase funding. As a result, funding of the Teachers’ system stood at 50% in 2008 and the combined funding ratio of the state’s five retirement systems was at 80%.

In 1995, Illinois passed legislation requiring the retirement systems to reach 90% funding by June of 2045. Contributions were supposed to increase significantly during a 15-year phase-in period to a level percentage of employee payroll. However, the State has made reduced contributions during times of budgetary pressure. The State issued $10 billion of pension bonds in FY2003, but the full amount was not used to pay down accrued pension liabilities. In FY2010, the State plans to issue $3.5 billion in debt to help make its pension payments. The General Assembly passed a law earlier this year that will reduce required State contributions in 2011 by allowing the retirement systems to recognize any unexpected investment gains or losses over a five-year period rather than recognizing them all at once. The method, known as asset smoothing, is permitted by Generally Accepted Accounting Principles and is used by most local government pension funds in Illinois.

The Civic Federation has issued a number of recommendations on how the State could improve its pension funding. For a more detailed discussion of Illinois’ retirement systems, please see the Federation’s analysis of the State’s FY2010 budget.