In advance of a $550 million bond sale this week, the State of Illinois announced it had negotiated new terms with the largest holder of Illinois swaps. The new lower level for termination of the swaps based on Illinois’ credit ratings dropped to Ba1 with Moody’s Investors Service and BB+ with Standard and Poor’s.

As discussed here previously, under its swap agreements the State is required to maintain a bond rating above a certain level or the deal is terminated. When a swaps contract is terminated the fair market value of the swap is paid to the party that has the positive position. Illinois’ swaps portfolio had a negative position as of April 30, 2016, that would lead to a payment of $155.1 million if the deals were terminated.

By renegotiating the terms of its swaps contract with Deutsche Bank, Illinois moved approximately $99.2 million out of a total $155.1 million in swaps termination risk slightly further away from becoming a reality. The new terms come after Illinois saw its credit rating cut to Baa2 by Moody’s and BBB+ with S&P in conjunction with the bond sale. Fitch affirmed its rating of Illinois at BBB+ but reduced its outlook to negative. All three major agencies currently have a negative outlook on the State’s bond rating.

The looming risk of swaps terminations became a real danger since the State’s bond rating with Moody’s below the ‘A’ level in October 2015. This led the state to hire a financial consultant and a law firm to help the state reduce its exposure to the termination penalties. It was reported in May that Illinois had chosen the law firm of Katten Muchin Rosenman at a cost of $100,000 and the Swap Financial Group of New York at a cost of $425,000 to assist in managing the swaps portfolio.

In 2003 Illinois sold $600 million of variable rate debt and set up a series of swaps to hedge against interest rate fluctuations with a group of counterparty banks that includes AIG Financial, Bank of America, Merrill Lynch, JP Morgan Chase, Loop Capital and Deutsche Bank. The bonds and associated swaps are repaid through 2033 but the State pays only interest until 2020.

According to the official statement published by the State in support of the June 2016 bond sale, the swaps associated with the variable rate bonds had a negative value of $155.1 million as of April 30, 2016. This is the amount the State would owe to its counterparties if its bond ratings fell below the original termination level of BBB for S&P or Baa2 for Moody’s. In a supplement to the document made available on June 13, 2016, the State informed investors that Deutsche Bank had agreed to lower the threshold, putting the risk of termination below BB+ for S&P and Ba1 for Moody’s.

The following table shows the outstanding swaps associated with Illinois’ variable rate date held by each of Illinois’ counterparties, the value of the deals and the associated ratings termination level. 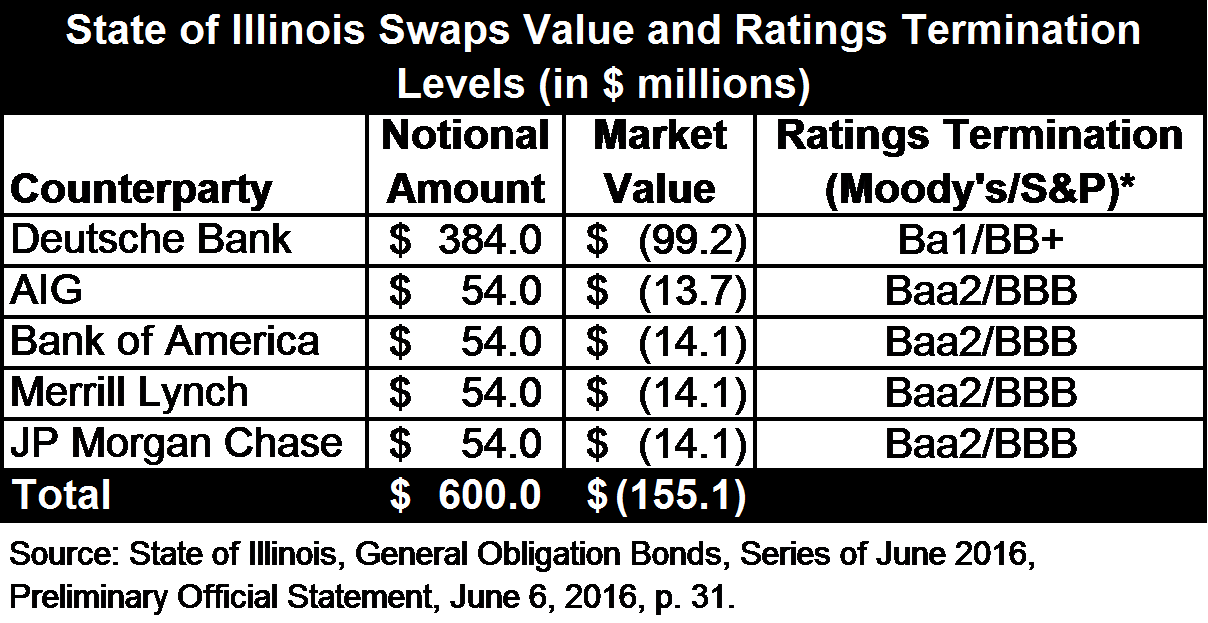 The recent ratings cuts and negative outlook came as Illinois entered the market with a new issuance of capital bonds after adjourning its regular session at the end of May with neither a final budget for FY2016 nor a budget for FY2017. As previously discussed here, some legislation was passed to release funds for FY2016 higher education and human service funding. Currently only the funding for higher education has been signed by the Governor. In advance of the sale, the Governor also warned that the funds received through the bond sale will be caught in limbo if the General Assembly fails to enact a capital budget that authorizes spending for its ongoing road construction program.

The bidding on the State competitive sale of the bonds ended on the morning of June 16 but the final closing of the deal will not be official until June 29.

Due to market influences and overall demand for municipal bonds, interest rates on government bonds reportedly declined leading up to the sale. Nonetheless, Illinois is still paying much higher interest on its bonds than benchmark securities and better rated states. Ten-year benchmark municipal bonds maturing in 2026 were trading at between 1.21% yield for AAA rated bonds to 1.52% for a single A rated bonds. Compared to the Illinois bonds sold yesterday that received a yield of 3.32%, the State paid between 1.7 and 2.0 percentage points more than better rated governments.

The following chart compares the yields that Illinois will pay on its June 2016 General Obligation Bonds compared to AAA, AA and A rated bonds on the same day as the sale. 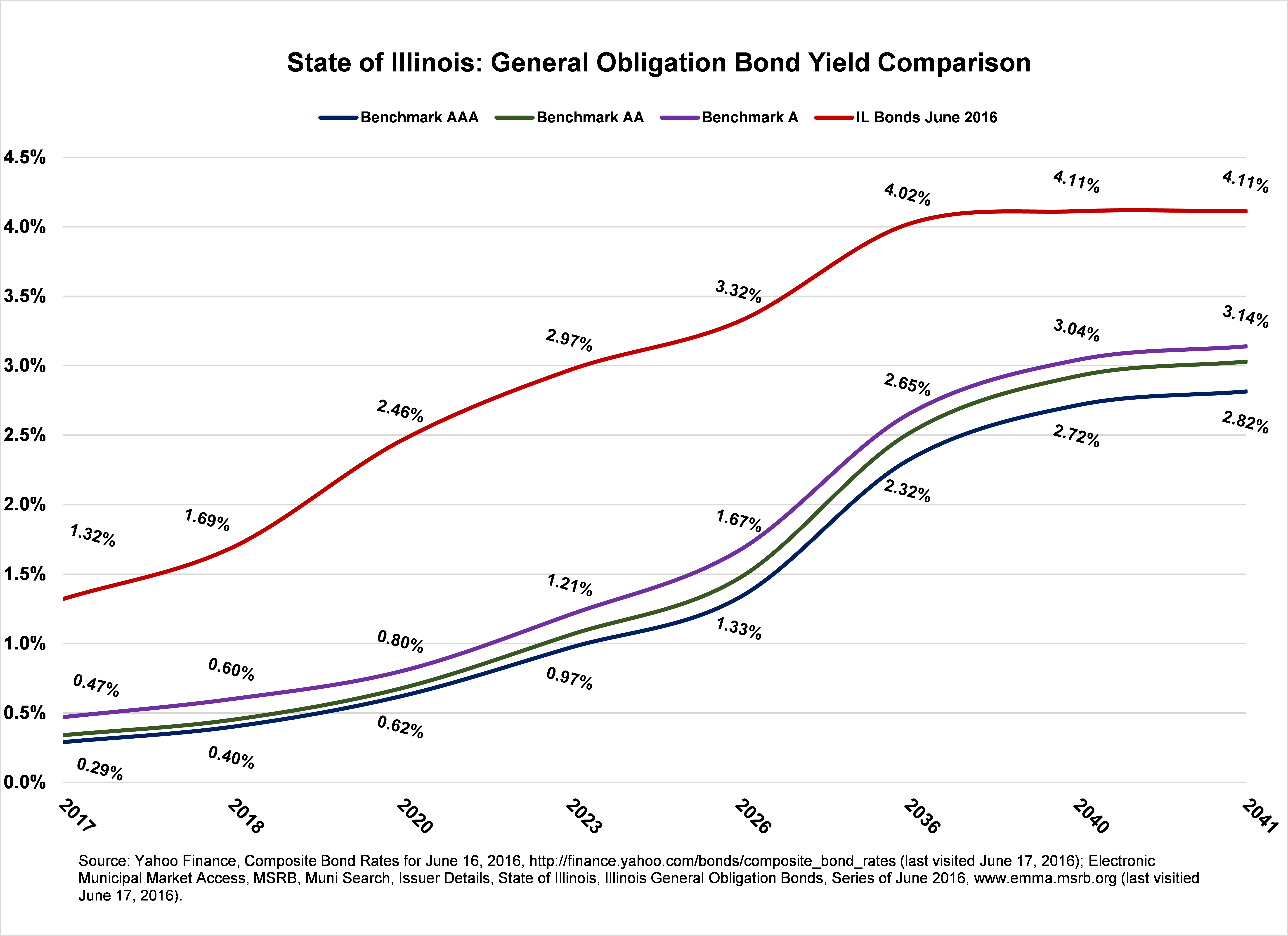 Although the State received very low rates compared to previous years, it continues to pay millions in additional interest compared to states that maintain a better credit rating. Illinois is the only state without at least a single A rating.