Debt is Not a Remedy for State Budget Woes

As part of an agreement with legislative leaders to push back the Governor’s annual budget address from February 17, 2010 until March 10, 2010, the Governor’s Office of Management and Budget posted preliminary FY2011 budget information to a new state website last week. In an introductory video on the website, Director David Vaught explains the fiscal crisis facing the State and the tough choices ahead for the Governor and General Assembly.
In the video, Mr. Vaught explains that the Governor has “four tools” to use to address  the deficit in FY2011, which IIFS previously reported will total at least $12.8 billion: budget cuts, borrowing, federal assistance, and raising taxes.
However, as discussed in the Civic Federation’s recently released report, “A Fiscal Rehabilitation Plan for the State of Illinois,” by issuing debt the State does not contribute to solving the deficit. Borrowing only pushes current liabilities into future years, further reducing the available General Funds for operations in subsequent years due to increases in the State’s required debt service payments.
State law allows for three major types of borrowing: short-term borrowing, long-term capital borrowing and long-term pension borrowing. A combination of short-term borrowing to pass deficits from one year to the next and pension borrowing to free up State money intended for the annual pension payments are the only ways the State has of addressing deficits through borrowing. Both methods were used in FY2010 rather than raising new revenues or making substantial cuts to balance the budget.
The following information appeared in the “Debt Trends” section of the Civic Federation’s full Fiscal Rehabilitation Plan for the State of Illinois and explains how these measures further complicated the State’s fiscal crisis going into FY2011. The report also shows how the State’s debt burden has tripled over the last decade and how the annual debt service payments from these loans have contributed to the current deficit. The section begins on page 48 of the report.
General Obligation and Revenue Bonds
Under the General Obligation Bond Act, the State is authorized to issue General Obligation Bonds (G.O. Bonds) to fund a variety of capital investments including roads, schools, mass transit, environmental projects and other facilities. G.O. Bonds are guaranteed by a pledge of the full faith and credit of the State, which is a legally binding pledge to pay both principal and interest on these loans as required by the bond agreements prior to any other use of State funds.
The G.O. Bond Act was amended in recent years to allow for debt-funded payments to the State’s retirement systems. In 2003, the State approved $10 billion in Pension Obligation Bonds (POB) to pay for unfunded liabilities in the State’s retirement systems. The amount was increased in FY2010 by $3.5 billion to make the annual payment that would have come from the State’s General Funds. These POB issuances have been used to justify reducing the annual contribution to the pension system and in the case of FY2010 as the source for the State’s annual pension contribution. This action allowed the legislature to use more General Funds for other expenditures. The FY2010 POBs will be paid back over the next five years. The original FY2003 POBs were financed over 30 years and the last bonds will be retired in FY2033.
The following graph shows the increase in total long-term State debt between FY2001 and FY2011. 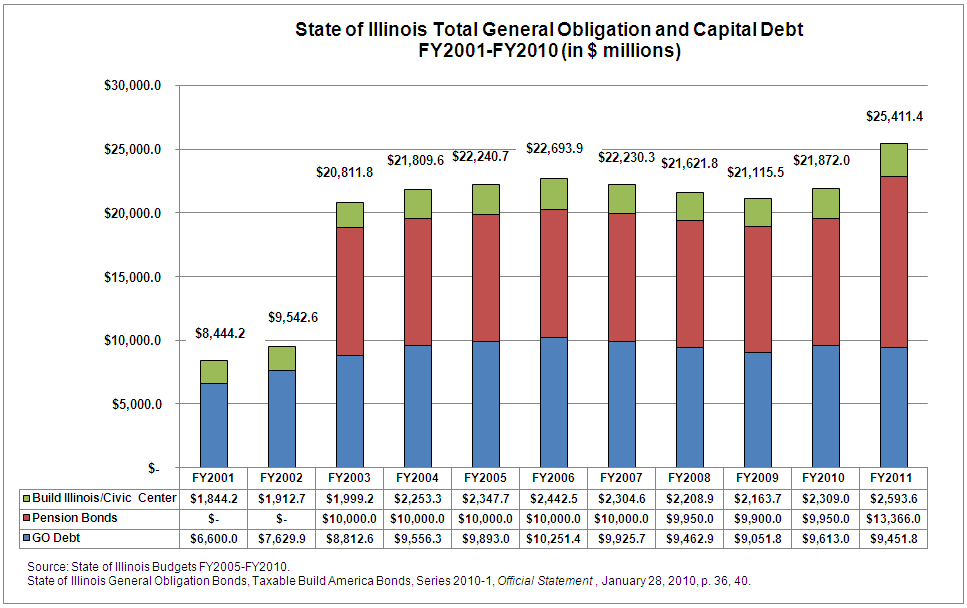 Illinois’ total G.O. debt has increased dramatically in FY2003 due to the issuance of $10 billion in Pension Obligation bonds in 2003. Likewise, the new capital borrowing and pension borrowing approved in FY2010 have contributed to another less drastic but significant increase in outstanding state debt of $4.3 billion or 20.3% from FY2010 to FY2011. Total debt could increase before the end of FY2010 depending on whether the state issues any of the remaining $4.1 billion of G.O. Bonds or $280.1 million in Build Illinois Bonds authorized in FY2010 but not yet sold.
Debt Service
The State’s debt service schedule sets forth the principal and interest amounts due for outstanding bonds on an annual basis. In FY2011, the State estimates its required debt payment will total $2.7 billion for all outstanding G.O. Bonds, POBs and revenue bonds that it appropriates funds to directly. This is a 162% increase in annual debt service cost owed by the State since FY2001, or $1,714.6 million. The largest increases to annual debt service came in FY2004 and FY2011, the years immediately following the sale of new POBs. The following chart shows the total debt service for existing Pension Obligation bonds, G.O. capital bonds and other capital bonds. 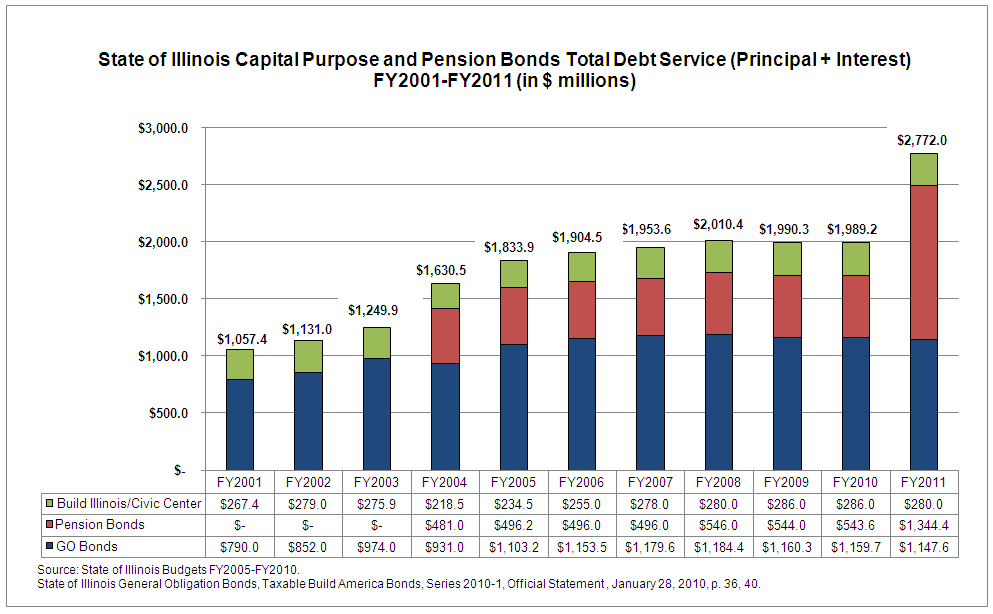 Short-Term Debt
Under the Short Term Borrowing Act, the State may issue short-term debt certificates based upon revenue anticipation or shortfall. The act provides for two qualifications for short-term borrowing. If the State experiences significant timing variations between disbursement of appropriations and receipt of revenues it may borrow up to 5% of the State’s total appropriations for that fiscal year that must be repaid entirely within the same budget cycle. The second scenario, which applies to the $1 billion in short-term notes that were issued at the close of the FY2009 budget, allows the State to borrow up to 15% of the total appropriations for any year if there is a failure in revenue. This type of short-term borrowing must be paid back within 12 months of issuance.
The following exhibit shows the upward trend in frequency and total amount of short-term certificates from FY1984 through FY2010. 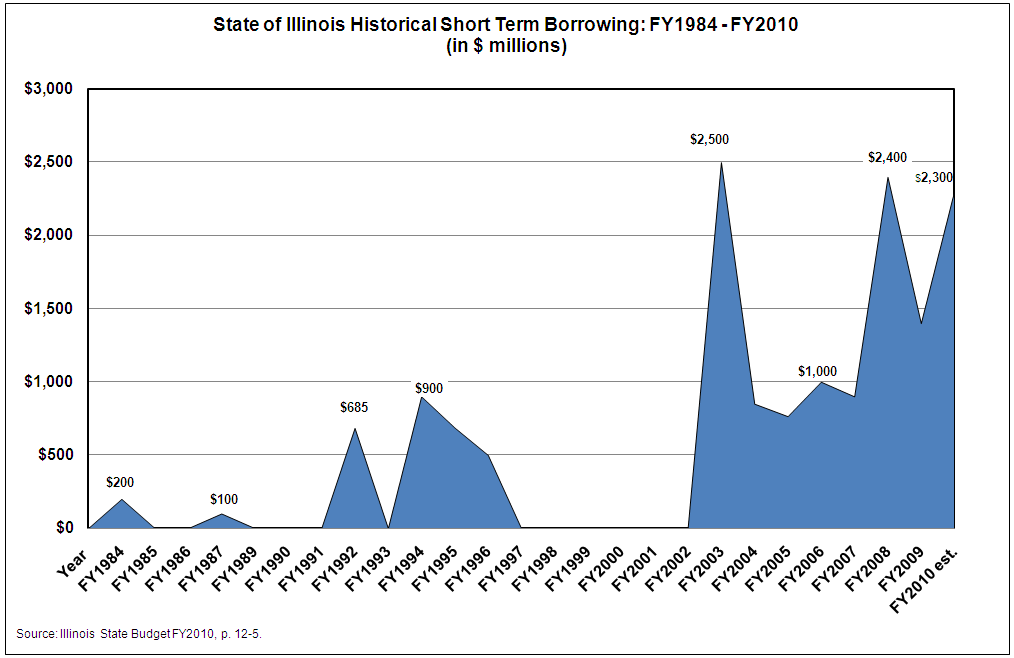 Due to a projected total of $5.7 billion in unpaid bills at the end of FY2010, the Governor will most likely to turn to a failure of revenues loan to close out the current fiscal year. However, as illustrated above, pension borrowing does not eliminate the State’s deficit but rather spreads it out over time, making the overall pension funding more costly and complicating future budgets through increased annual loan repayment.
The entire State of Illinois debt analysis and additional information included in the Fiscal Rehabilitation Plan on funding the pension system and other causes and remedies to the State budget crisis are available in the full report.

What Limitations do States Face in Addressing a Coronavirus Pandemic Recession?

States are currently facing monumental fiscal challenges posed by the economic and revenue impacts of the coronavirus pandemic. However, their ability to use fiscal policies to address these challenges is quite limited due to structural and capacity issues. Only the federal government has the...

Throughout the United States there is a bipartisan consensus that...

What Limitations do States Face in Addressing a Coronavirus Pandemic Recession?

States are currently facing monumental fiscal challenges posed by the economic and revenue impacts of the coronavirus pandemic. However, their ability to use fiscal policies to address these challenges is quite limited due to structural and capacity issues. Only the federal government has the...