What Does the Elimination of Cash Bail Mean for Illinois Jurisdictions?

Last year, the Civic Federation worked in partnership with the Administrative Office of the Illinois Courts (AOIC) and the Illinois Supreme Court’s Pretrial Implementation Task Force to release a report that measures the financial impact that the elimination of cash bail in Illinois will have on counties and circuit court clerks throughout the state. This week, the AOIC and the Task Force released a series of updates to the report, originally released in September 2021. The updates include a revised version of the original report, as well as a new data Addendum with an additional year of data for 2021.

These reports aim to measure how much of a financial impact the elimination of money bond will have on Illinois counties, and specifically on circuit court clerks, once the abolishment of cash bail takes effect in January 2023 pursuant to Public Act 101-0652, or the SAFE-T Act. In current practice, judges commonly require people accused of crimes to pay money as a condition of their release, referred to commonly as cash bail.[1] These upfront payments are held until the conclusion of the case, and are frequently used to satisfy the payment of fees, fines and restitution upon conviction. Circuit court clerks are authorized by Illinois statute to retain 10% of the deposited bond amount as “bail bond costs” (referred to as bond processing fees in this analysis) and return 90%, except in Cook County where the court clerk may only retain up to $100 of each bond deposited. After fines and fees are applied from the bond payments, the remaining amount is refunded back to the person who paid the bond.

Based on the most recent 2021 data, the majority of bond payments are used to satisfy the payment of fees and fines, many of which support government functions at the state, local and county level. Across 95 Illinois counties that provided data for 2021 (excluding Cook County and a handful of smaller counties),[2] bond payments processed and disbursed in criminal cases totaled $83.1 million. Just under half of those total bond payments, 48% or $39.5 million, were applied to satisfy court-ordered fees. A smaller portion, approximately 10%, were applied to satisfy court-ordered fines, and another 3% were applied to restitution payments. Approximately 39%, or $32.6 million, were refunded back to the person who posted the bond or paid directly to private attorneys.[3] 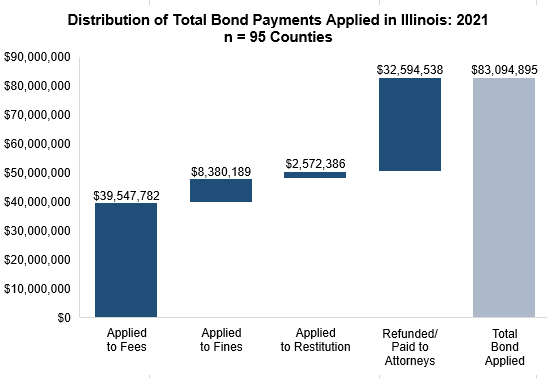 While the SAFE-T Act does not alter the ability for courts to impose fees, fines, and assessments on those convicted of crimes in Illinois, these upfront bond payments will no longer be able to be used to satisfy the payment of fees and fines. Therefore, there are questions about whether courts will have more difficulty collecting payments of fines and fees. There are also questions about whether it is appropriate to fund court services through fees and fines, which are less effective revenue streams than tax revenue and disproportionately impact communities of color. Because of this, it will be important to consider and monitor the potential impact this change may have, such as delayed payment to private attorneys or violations of probation terms stemming from non-payment of fines, fees or restitution. There will also need to be consideration of what government functions were financially supported with the bond processing fees, and what other sources of revenue can be used to support these activities.

The only fees that will be completely eliminated with the abolition of cash bail are bond processing fees. Circuit court clerks are authorized to retain 10% of bond payment amounts after all other court-ordered obligations have been met.[4] This is referred to as “bail bond costs” in state statute, and referred to as “bond processing fees” for purposes of this analysis. The revenue collected through these processing fees is deposited into the county’s general fund and then appropriated for use by the clerk of the circuit court or for other county functions. 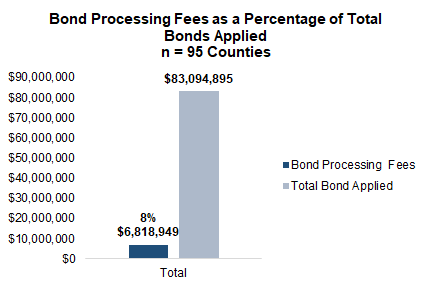 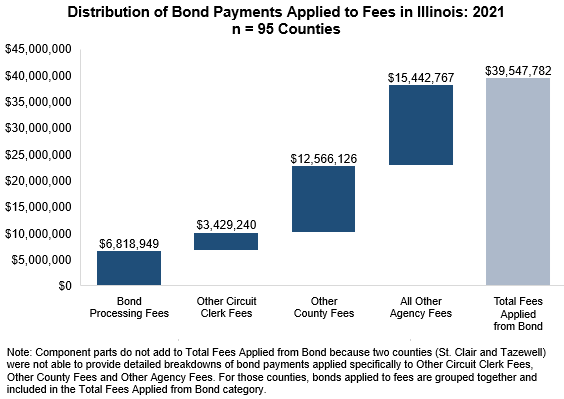 For detailed figures for each individual county, see the table in the Addendum.

[1] Although the terms bail and bond are sometimes used interchangeably, they refer to distinct aspects of the pretrial release process. Bail refers to the process of pretrial release, while bond is an agreement to abide by the conditions of release. Payment of money is a form of bond.

[3] Only five counties—DuPage, McLean, Sangamon, St. Clair and Will—were able to provide data on direct payments to attorneys. Counties that could not provide this information indicated that any payments made from bond directly to attorneys would be included in the bond payments refunded category, so payments to attorneys are grouped together with bond refunds.

[4] The only exception to this is that Cook County Circuit Court Clerk is limited by state statute to retain up to $100 from every cash bond payment posted for pretrial release rather than 10%. This policy change specific to Cook County went into effect on January 1, 2016.