One of the Chicago Transit Authority’s ongoing fiscal challenges has been balancing the cost of providing rides on the CTA with the fares the Authority collects from its customers. CTA Board Chairman Terry Peterson announced at the Authority’s February board meeting that it costs the Authority approximately $7 to provide a ride on the system while the estimated average fare per trip in FY2009 was $0.97.[1] Between FY2006 and FY2009, the average fare collected per trip has increased 4 cents. The following chart summarizes the average fare per trip for the Authority for FY2006 through FY2009. FY2006 was the earliest fiscal year for which comparable data was available. 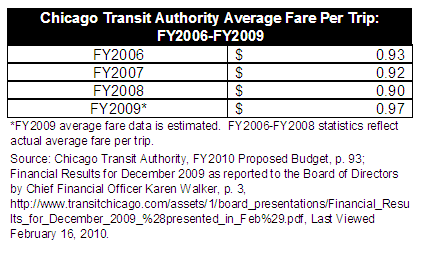 The average fare is low relative to the cost of providing a ride on the system because while regular passengers pay $2.25 or $2.50 for a ride on the system, the cost of providing free and reduced rides on its system substantially lowers its total farebox revenues. The free rides program took effect in March of 2008 and extended free rides to seniors, active military personnel and disabled veterans.[2] These individuals receive free rides regardless of their ability to pay. The reduced fare program offers lower fares for qualified students and persons with disabilities.[3]

Implementing the free rides has been particularly costly for the CTA and has made it difficult for the Authority to substantially raise its average fare, despite recent fare increases and attempts to reduce operating costs. According to estimates provided at the Authority’s January and February meetings, free rides made up 14.2% of the Authority’s total ridership 2009. Under the program, approximately 74.1 million of the Authority’s 521.2 million total rides for 2009 were given for free.[4]

The lost revenue and cost of providing free rides will continue to put pressure on the CTA’s operating budget. It will particularly impact revenues because the Authority’s enacted FY2010 budget will prevent it from instituting fare increases in FY2010 and FY2011 in exchange for an additional $83 million in operating funds in FY2010 and FY2011 from an RTA bond issuance. The General Assembly has taken preliminary steps to address the problem as the Illinois House is considering a bill that would limit the free rides program to seniors who meet certain income eligibility requirements set forth in the Senior Citizens and Disabled Persons Property Tax Relief and Pharmaceutical Assistance Act.

Notably, the Authority is supposed to receive a subsidy from the State of Illinois to provide free and reduced fare rides; however, the free rides program still accounts for millions in lost revenues from fares that are not entirely replaced by the subsidy. In its FY2010 budget, the Authority estimated that the free rides program alone would cost the Authority $30 million in lost revenue for the fiscal year and budgeted that it would only receive $16.1 million from the State’s reduced fare subsidy.[5] Estimates from the University of Illinois at Chicago’s College of Urban Planning and Public Affairs’ Analysis of the RTA Seniors and People with Disabilities Ride Free Programs project that the Seniors Ride Free program cost the CTA between $16.9 million and $59.2 million in lost revenues.[6]  Furthermore, the State’s subsidy has dramatically declined from years before the implementation of Senior Free Rides Program. Until FY2008 the amount annually granted from the State was approximately $32.0 million.

At its February board meeting, CTA Board Chairman Terry Peterson discussed the challenges the Authority’s low average fare poses to its operating budget. Mr. Peterson gave his support for elimination of the Seniors Ride Free Program and changes in means testing for reduced fare rides in order to raise the average fare.

The Seniors Ride Free program has contributed to the CTA’s multi-million dollar budget deficits and puts unnecessary stress on the system’s revenues. The Civic Federation sees no sound public policy reason to provide free rides for affluent seniors who are able to pay and help defray the cost of public transit. The General Assembly should enact legislation that would eliminate free rides or limit them to low-income seniors who qualify under the Authority’s reduced fare guidelines.

[1] Financial Results for December 2009 as reported to the Board of Directors by Chief Financial Officer Karen Walker, p. 3, http://www.transitchicago.com/assets/1/board_presentations/Financial_Results_for_December_2009_%28presented_in_Feb%29.pdf, Last Viewed February 16, 2010.

[6] University of Illinois at Chicago, College of Urban Planning and Public Affairs, “Analysis of the RTA Seniors and People with Disabilities Ride Free Program,” p. 3, slide 5.