How Much Fund Balance is Too Much? Not Enough? Just Right?

All governments - whether states, cities or school districts - should place a portion of their general operating revenues in a general fund reserve or “rainy day” fund. These rainy day funds are savings accounts that governments can use to address revenue shortfalls or unanticipated expenditures and to help stabilize tax rates. The discussion here centers around reserves for general funds only, not revenues from long-term asset lease proceeds such as the City of Chicago lease of parking meters or the Skyway. The appropriate use of those proceeds is addressed in several previous Civic Federation blog posts.

Why Should Governments Have Reserves?

Emergencies or unanticipated situations happen all the time. A snowier than predicted winter can rapidly exhaust a city’s snow removal budget. Skyrocketing energy costs can overwhelm a planned fuel budget. A large adverse legal settlement can immediately cost millions of dollars. Collections of economically sensitive revenues such as sales or income taxes may plunge far more than originally forecast as an economic downturn intensifies.

Governments that maintain adequate reserves are better positioned to deal with funding issues in bad times. The Chicago Public Schools, for example, used reserve funds to balance its FY2009 budget instead of raising property taxes. (See Civic Federation Analysis of Chicago Public Schools FY2009 Budget). Therefore, in good economic times it is a prudent for governments to use a portion of budget surpluses to help create, sustain or increase the size of a general fund reserves. Putting money into reserves is a more fiscally prudent action than spending surplus funds on new or expanded programs.

The National Advisory Council on State and Local Budgeting (NACSLB) and the Government Finance Officers Association recommend that all governments develop a formal, written fund balance policy that is made publicly available (See NACSLB Recommended Practice 4.1).

How Big Should Reserves Be?

While it is a good idea to have general fund reserves that can be used for contingencies, how big should that reserve be? This is a contentious issue to which there is no one-size-fits-all answer.

The credit rating agencies, which regularly monitor the size of governmental fund balances, prefer large reserves so that there is a degree of assurance that debt service payments will be made. However, if a government consistently maintains large reserves, it raises concerns from taxpayers and citizens’ groups about whether the government is taxing too much and hoarding the proceeds. 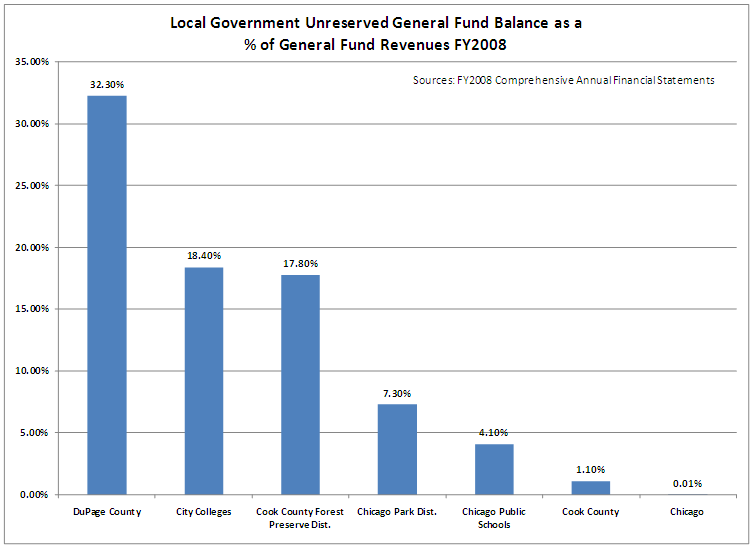 The Civic Federation’s Position on Reserves

The Civic Federation strongly supports local governments adopting a formal fund balance policy and maintaining general operating fund reserves to at least at the GFOA minimum recommended level. We support the reasonable use of reserves to prevent severe service cuts, tax hikes or to address unforeseen contingency situations. However, we do caution against governments holding excessive reserves, which we have defined as being a ratio of unreserved general and special revenue balances to operating expenditures for those funds higher than 50%. In our view, if a government has a fund balance ratio higher than 50%, it should consider shifting toward longer term asset holdings, retiring debt or adjusting the income streams feeding the funds to bring income in line with current spending requirements (See Evaluating Local Government Financial Health: Financial Indicators for Cook, DuPage, Kane, Lake, McHenry, & Will Counties).