How do Chicago’s Hotel and Home Share Taxes Compare to Other Cities?

The City of Chicago levies taxes on both hotel operations and occupancy. The City charges a 4.5% hotel accommodations tax and a 6.0% additional home share tax on rentals through companies such as Airbnb, as well as a 1.0% hotel operators tax. The original 4.0% home share tax was implemented in 2016 to fund supportive services related to housing for the homeless. An additional 2.0% tax was added in 2018 to support domestic violence services. The effective composite hotel tax rate in Chicago, including hotel taxes imposed by other governments and agencies, is currently 17.4%, and the composite rate for home share rentals is 23.4%. The City projected revenue from the hotel accommodations tax in FY2019 would be $126.3 million, including the additional tax for home shares. The City projected revenue from the hotel operators’ tax in FY2019 would be $25.9 million.

The table below details the effective tax rates for each agency that levies a hotel-related tax in the City of Chicago and the composite total. Some of the governments’ hotel taxes are on gross receipts, while some are applied to net receipts, or the base charges paid by hotel guests. The table does not include the surcharge for home shares.

The recently released FY2020 Budget Forecast for the City of Chicago indicates that the City expects growth in business travel and tourism, as well as in occupancy and room rates over the next three years, which could contribute to growth in hotel tax revenues.

Many states and cities levy taxes on hotel occupancy, often referred to as transient lodging taxes. As the Bureau of Government Research, a research organization based in New Orleans, Louisiana, points out, hotel taxes are generally paid by nonresidents, making them a useful tool for cities that enjoy high tourism rates. However, the Bureau also notes that excessive rates can result in a decline in tourism and tourism-related revenue in the long run.

Hotel taxes vary widely across states and cities. The chart below compares overall tax impact across selected cities. New York, Los Angeles, Las Vegas and Orlando were selected because they are peer cities of Chicago in terms of volume of tourism. The State and City of New York apply general state and local sales tax to hotel use, along with an additional city hotel tax, a flat nightly fee and a graduated nightly fee based on room cost. On the other hand, the State of California does not tax hotel occupancy or use, but allows local governments like Los Angeles to levy their own Transient Lodging Tax. In order to accommodate variances like these, the chart presents the dollar value of taxes paid on a $100 per night hotel room in each city. It should be noted that because of how some of the taxes are structured, the comparison may look different at higher or lower price points. 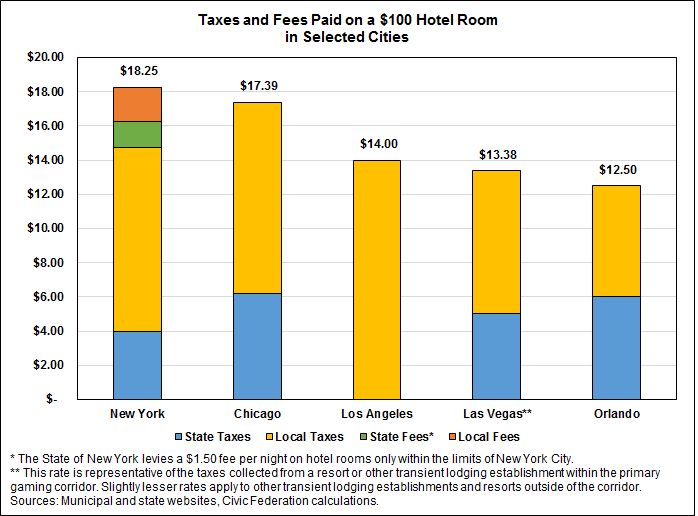 The City of Chicago is the only city of the five in this analysis that charges an additional surcharge on home share rentals. New York exempts “bungalow rentals,” defined as a single-family unit that is rented fully furnished, as long as no housekeeping or food services are provided. Home share services that do not fall under this exemption are charged the occupancy taxes and fees in place for regular hotels. Los Angeles, Las Vegas and Orlando collect the regular transient occupancy tax on home shares, but do not levy any additional taxes or fees. New Orleans is the only other example of a major, high-tourism city in the United States with an additional home share surcharge the Civic Federation could find, with a $1 flat fee on short-term rentals.

The chart below attempts to compare overall tax impact across selected cities on a $100 home share rental. Chicago’s home share surcharge makes the taxes levied on such rentals significantly higher than in the peer cities included in this analysis. 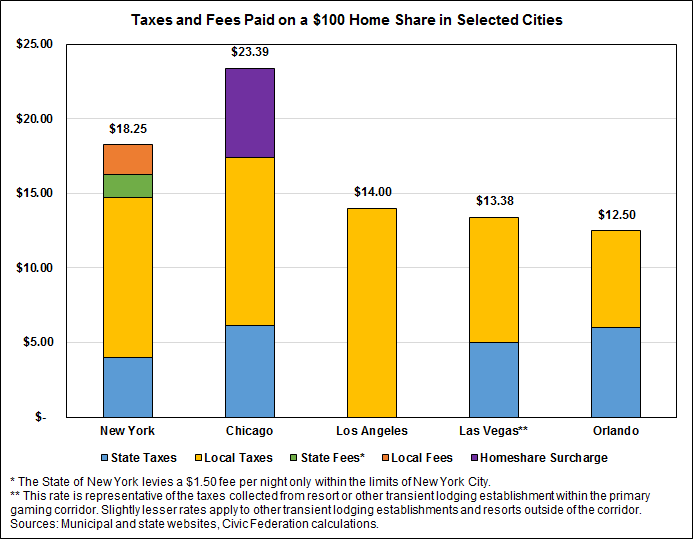 Home share is a relatively new frontier for states and municipalities and many are struggling to navigate issues around zoning, licensing, oversight and tax collection. It remains to be seen whether other major cities in the Unites States will follow Chicago and New Orleans in charging extra fees or taxes for home share in addition to hotel and sales taxes.