Cook County’s public health system faces significant financial challenges in fiscal year 2013, although the outlook could improve if the federal government signs off on a plan to expand Medicaid coverage in advance of national healthcare reform.

New financial projections for the Cook County Health and Hospitals System were included in the Preliminary Budget Estimates report for FY2013, issued on June 27, 2012 by the Office of Cook County Board President Toni Preckwinkle. As discussed here, the report provides year-end revenue and expenditure estimates for Cook County for FY2012 and preliminary projections for FY2013, which begins on December 1, 2012. The Health System provided more details on its revenues in a report presented at the System’s Finance Committee meeting on June 22, 2012.

The following table provides a breakdown of Health System operating revenue for FY2012 and FY2013, as well as total expenditures and County subsidy for those years. The revenue estimate for FY2013 does not include potential revenue from the Medicaid expansion plan. 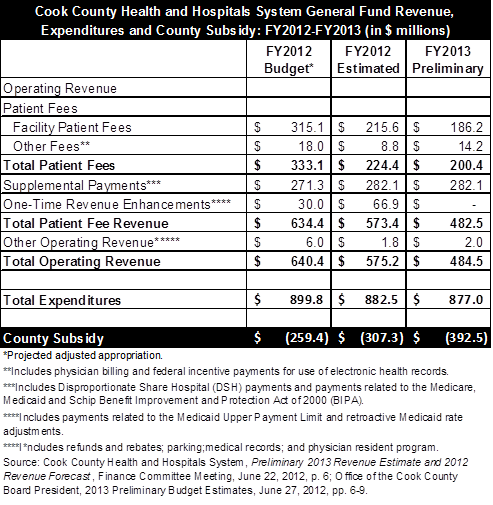 In FY2012 the Health System’s estimated patient fee revenue is $224.4 million, down $108.7 million, or 32.6%, from the budgeted level of $333.1, according to the report presented at the June 22, 2012 meeting of the System’s Finance Committee. This shortfall is partly offset by higher than budgeted one-time revenues of $66.9 million stemming from retroactive Medicaid rate adjustments and other federal Medicaid payments that will not be available in FY2013.

The FY2013 expenditures of $877.0 million shown in the chart represent the President’s Office’s preliminary proposed appropriations. The Health System estimates that it would need appropriations of $893.3 million.

Using the preliminary FY2013 appropriations proposed by the President’s Office, the Health System’s County subsidy for that year would be $392.5 million. That subsidy would compare to a budgeted subsidy of $259.4 million for FY2012 and an actual estimated subsidy of $307.3 million in FY2013. It should be noted that this amount does not include costs paid by the County for the Health System’s share of pension contributions and debt service.

However, the revenue outlook could improve if the Health System receives approval from the federal government for its plan to get a head start on federal funding for low-income adults who are scheduled to be eligible for Medicaid under national healthcare reform beginning in 2014. An obstacle to the plan was recently removed by the U.S. Supreme Court, which held in its landmark ruling on healthcare reform that the Medicaid expansion was constitutional but that existing Medicaid funding could not be withdrawn if states choose not to participate.

In a proposal to the federal government, the Health System and the Illinois Department of Healthcare and Family Services stated that roughly 250,000 people in Cook County are expected to gain Medicaid coverage under national healthcare reform. Approximately 100,000 of the newly eligible recipients are currently patients of the Health System who have no insurance coverage. According to Health System estimates, the plan could bring in $70 million a year in federal reimbursements, although actual revenue depends on enrollment and monthly per patient fee.

The Health System had initially hoped to launch the plan by July 1, 2012. Dr. Ram Raju, the Health System’s chief executive office, said at a County Board meeting on June 19, 2012 that the new target date is the end of August.