The health of the Forest Preserve pension fund, like that of the Cook County pension fund, has declined in recent years. The actuarial value funded ratio fell from a high of 98.0% in FY2001 to 65.2% in FY2010. The unfunded accrued actuarial liabilities grew from $3.7 million to $98.3 million over the same ten-year period.

While the Forest Preserve District’s pension fund is not yet in quite as dire straits as some other state and local pension funds, it soon will be if no action is taken. Major reforms to contributions and benefits will keep the pension fund solvent and distribute tax burden more fairly among current and future taxpayers by tackling the problem sooner rather than requiring larger service cuts or tax increases later to keep promises made to retirees and employees.

One way to gauge the sufficiency of contributions to the fund is to compare actual employer contributions to a benchmark number that must be reported in the government’s financial statements. The financial reporting requirements for public pension funds and their associated governments are set by the Governmental Accounting Standards Board (GASB). The standards require disclosure of an Annual Required Contribution (ARC), which is an amount equal to the sum of (1) the employer’s “normal cost” of retirement benefits earned by employees in the current year and (2) the amount needed to amortize any existing unfunded accrued liability over a period of not more than 30 years. Normal cost is the portion of the present value of pension plan benefits and administrative expenses that is allocated to a given valuation year.

ARC is a financial reporting requirement but not a funding requirement. The statutorily required Forest Preserve District contribution to its pension fund is set in the state pension code. However, because paying the normal cost and amortizing the unfunded liability over a period of 30 years does represent a reasonably sound funding policy, the ARC can be used as an indicator how well a public entity is actually funding its pension plan. The Forest Preserve District is required to make an annual employer contribution equivalent to 1.30 times the total employee contribution made two years earlier.[1] The Forest Preserve District levies a property tax for this purpose and that pension amount appears as a separate line on tax bills.

The graph below illustrates the growing gap between the “combined” pension and OPEB ARC as a percent of payroll and the actual employer contribution as a percent of payroll. The spread between the two amounts has grown from 4.0% of payroll, or $1.1 million, in FY2001 to 32.8% of payroll in FY2010. In other words, to fund the pension and retiree health care plans at a level that would both cover normal cost and amortize the unfunded liability over 30 years the Forest Preserve District would have needed to contribute an additional 32.8% of payroll, or $8.0 million, in FY2010. 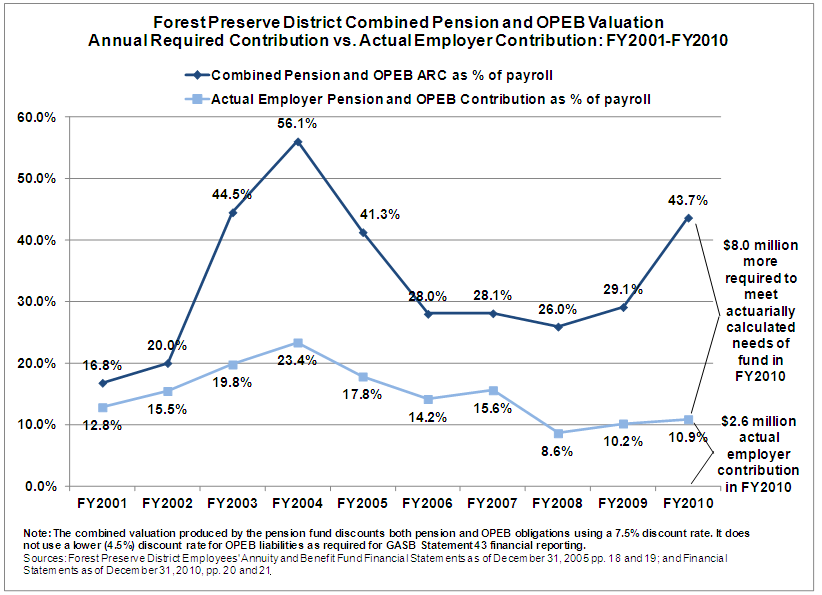 The District has consistently levied and contributed its statutorily required amount of 1.30 times the employee contribution made two years prior. However, that amount has been less than the ARC for each of the last ten years. The pension fund actuary estimates that in order to contribute an amount sufficient to meet the ARC in FY2011, the District would need to levy property taxes equal to a tax multiple of 4.95 rather than 1.30.[2]