On June 23, 2022, Cook County Board President Toni Preckwinkle issued a preliminary budget forecast for fiscal year 2023. The fiscal year begins December 1, 2022 and ends November 30, 2023. The report provides end-of-year estimates for the current 2022 fiscal year and a forecast for the upcoming 2023 fiscal year in the County’s operating funds. The operating funds include the General Fund, which accounts for administrative and public safety operations, and the Health Fund, which accounts for the health and hospitals system run by the County. The forecast indicates the financial condition in which Cook County government will be entering the next fiscal year, and identifies any budget deficit that must be closed through corrective action.

The year-end forecast for the current 2022 fiscal year anticipates much better results than originally expected. The County currently forecasts a year-end FY2022 surplus of $233.4 million in the General Fund and $29.3 million in the Health Fund, for a total positive budget balance of $262.7 million. At this same time last year, Cook County projected it would end FY2022 with a $60.3 million budget deficit in the General Fund and a $61.1 million deficit in the Health Fund, for a total budget deficit of $121.4 million. During the course of the year, the County’s FY2022 outlook improved due to a number of various factors, including inflationary effects on some tax collections, increased fee revenue, increases in one-time revenues, unanticipated growth in property tax payments and payroll savings related to a tight labor market and hiring timeframe, as well as higher than budgeted CountyCare membership.

The table below shows the anticipated revenues and expenditures within the General Fund and Health Fund at the end of FY2022 compared to adopted budget figures. In the General Fund, the $233.4 million surplus is the result of revenues exceeding budget expectations by $161.6 million and expenditures coming in $71.8 million below budget. Property taxes and tax increment financing (TIF) surplus are expected to end the year on budget. Non-property taxes are expected to be higher than budget by $110.3 million, or 7.6%, due to stronger than projected County sales tax revenue. Fee revenue is anticipated to be $61,628, or 31.7%, above budget, largely due to an increase in recording fees in the County Clerk’s Office due to the robust housing market and revenue enforcement initiatives.

The Health Fund budget surplus of $29.28 million is due to revenues exceeding budget by $439.4 million, which is mostly offset by expenditures also exceeding budget by $410.1 million. The much higher than anticipated revenues and expenditures within the Health Fund are due in part to an increase in membership in Cook County’s own managed care plan, CountyCare, and associated patient fee revenue and health plan claims. Cook County Health anticipates monthly CountyCare membership to average approximately 430,000 in FY2022 compared to the original projection of 391,000 due to the State’s temporary suspension of the redetermination process and more Medicaid auto-enrollments to CountyCare. Medicaid revenue from both CountyCare and payments from other managed care organizations for healthcare services provided at Cook County facilities is projected to be $544.1 million, or 18%, higher than budgeted. The higher CountyCare enrollment also has resulted in increased costs associated with the health plan. However, despite the year-end expense increases, the County anticipates savings on personnel costs due to delays in hiring as a result of a tight labor markets, as well as federal reimbursements for COVID-19 related costs. 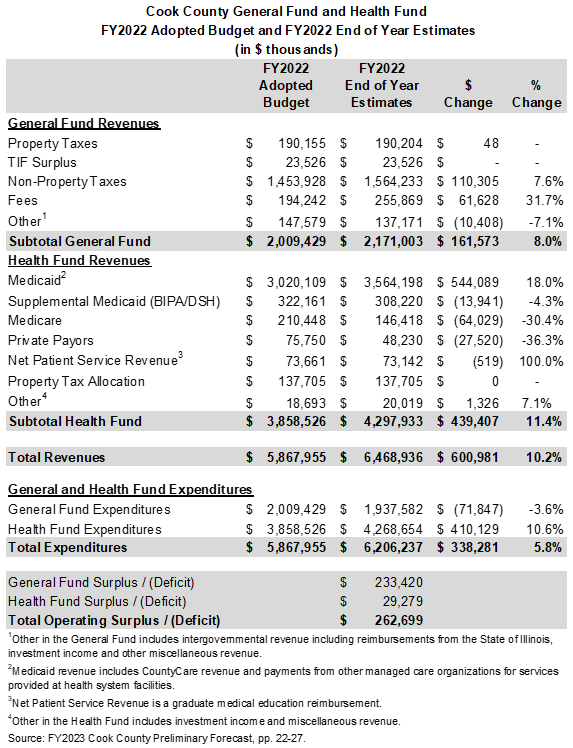 The County expects General Fund revenue to increase by $80.4 million from the adopted FY2022 budget, largely due to record high inflation, increased collections on online sales and the continued economic recovery after the lifting of the Illinois COVID restrictions. Overall non-property tax sources are expected to increase by nearly $103.0 million, or 7.1%, in FY2023 over the prior year adopted budget, including anticipated increases in sales tax by $92.2 million, and hotel tax by $5 million. Property tax revenue supporting the General Fund is expected to increase by nearly $10.0 million, or 5.2%, compared to the FY2022 adopted budget. The County’s base property tax levy remains flat, as there has been no adjustment to account for inflation since 1996. Fee revenue is projected to increase by $7.3 million, or 3.8%, in FY2023 from the prior year. The main drivers include an increase in Sheriff’s general gee revenue due to increased revenue enforcement, and an increase in Clerk of the Circuit Court fee revenue from increased court activity with the re-opening of the courts following pandemic closures. Other revenue will decline by $39.8 million, or 27.0%, due to the elimination of a one-time transfer to the Health Enterprise Fund from the General Fund to fund the Health Plan Services.

While the General Fund revenue outlook for FY2023 is positive, expenditures are expected to rise by $84.7 million above the FY2022 adopted budget, resulting in a $4.3 million deficit the County will need to close. The projected FY2023 increase is due to a $74.1 million increase in personnel spending, as well as higher costs of goods and services purchased by the county due to inflationary pressures. Both of these expense increases are partially offset by an estimated decrease of $25 million in the supplemental pension contribution made to the Cook County Pension Fund, from $345.0 million in FY2022 to $320.0 million in FY2023.

The projected increase in revenue is also related to an increase in CountyCare enrollment. Average membership in FY2023 is estimated at 410,000 members per month. Medicaid Public Assistance Revenue, which includes CountyCare revenues, is the primary driver for the increase in revenue for the Health Enterprise Fund, with an expected increase of $188 million, or 6.2%, over the FY2022 adopted budget. Along with increased CountyCare enrollment, this increase is largely due to continued auto-assignment, and the resumption of redeterminations by the State in FY2023.

The County will need to identify measures to close these projected deficits in the General and Health Funds before releasing the recommended FY2023 budget in October. 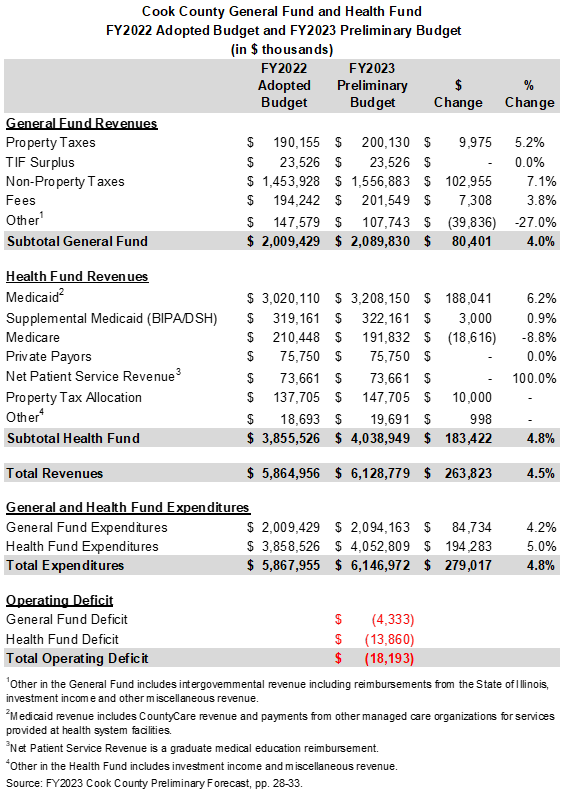 A public hearing on the preliminary forecast is scheduled for July 11, 2022 at 6 p.m., and the Cook County Board will also hold departmental budget hearings beginning in mid-July. President Preckwinkle’s final budget recommendation will be presented in October 2022. Members of the public can submit budget questions through the County website.