The exhibit below shows the amounts proposed by CPS for FY2016-FY2020 for capital spending. In those five years, a total of approximately $536.8 million has been forecast for projects. This is nearly a 57% decrease from the FY2015-FY2019 capital improvement plan forecast for projects that was expected to total nearly $1.2 billion in spending.

In its FY2016 budget, CPS proposes spending a total of $160.3 million for capital projects. The largest single amount will be $84.6 million, or 53%, for facility needs such as roof, chimney and masonry repair and other urgent repair needs. This is followed by nearly $28.5 million in funding for facility upgrades and site improvements for projects such as athletic fields and play lots. Nearly $24.0 million is proposed to be spent for “other” projects that will support information technology and the expansion of district-wide Pre-K programming. Projects intended to provide relief from overcrowding will be budgeted at $10.2 million or 6.0% of all spending. Contingency spending is budgeted at $10.0 million for emergency facility needs and repairs. Programmatic spending, which will be 2% of total spending, or $3.0 million, includes funding for a new media lab and security enhancements, among other projects. 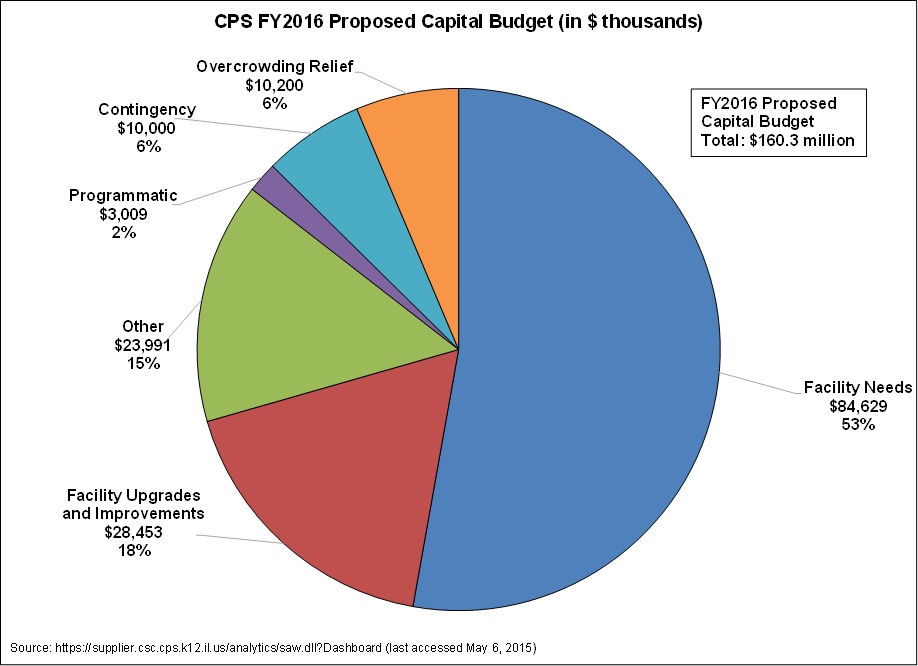 CPS’s FY2016 proposed capital budget and updated Five-Year Capital Improvement Plan is made available on the District’s interactive capital website at www.cps.edu/capitalplan. The CIP website features a summary page for each project. The project summaries provide information regarding a project’s type and category, status, amount budgeted and corresponding budget year, anticipated start and completion dates, funding source and the purpose and scope of the project.

The capital improvement plan includes a brief explanation of the rationale for identifying and prioritizing capital needs throughout the CPS district.[1] The rationale is based on the recent changes to the State of Illinois’ School Code in Public Act 97-0474. CPS’s interactive capital website provides users with information on planned and current projects and allows them to select projects and review information by school, geographic area, type and year.[2]

Overall, the CPS capital improvement plan meets the requirements of P.A. 97-0474 for a five- year capital plan as well as most of the best practice requirements as defined by Government Finance Officers Association (GFOA) and the National Advisory Council on State and Local Budgeting. These include identifying and describing the prioritization process used, providing a timeline for completing projects, identifying funding sources for projects and making the CIP publically available for stakeholders on the CPS website. In addition, the district accepts public input via the web site and at public hearings. The Board of Education votes to adopt the one-year capital budget each year, not the full five-year CIP.[3]

Public Act 97-0474 requires CPS to annually prepare and publish a capital budget and five-year capital improvement plan (CIP). It was amended in P.A. 97-1133 to also require the development of a 10-year Educational Facilities Master Plan. The FY2016 capital budget and five-year capital improvement plan was developed based on findings from the Educational Facility Master Plan, which was released in September 2013. The plan’s goals include: 1) using educational goals to guide the direction of capital programming; 2) maintaining health and safety of students and staff; 3) supporting a full school day; 4) relieving overcrowding; and 5) identifying partners for external funding support.

[1] Information about CPS’s prioritization and planning process can be found at http://www.cps.edu/About_CPS/Policies_and_guidelines/Documents/CapitalPlan/Planning2014.pdf