On May 2, 2012, Chicago Public Schools (CPS) released a capital budget via a new interactive website. The proposed capital improvement plan (CIP) includes a FY2013 capital budget and a five-year capital plan for FY2013-FY2017. In addition, the plan describes CPS’ 165 ongoing capital projects and their statuses. These projects total approximately $765 million and have been ongoing since 2006.

The website features a summary page for each project included under the capital plan. The project summaries provide information regarding a project’s type and category, status, amount budgeted and corresponding budget year, anticipated start and completion dates, funding source and the purpose and scope of the project. As an example, below is a project summary page from the CIP for Lane Tech High School. 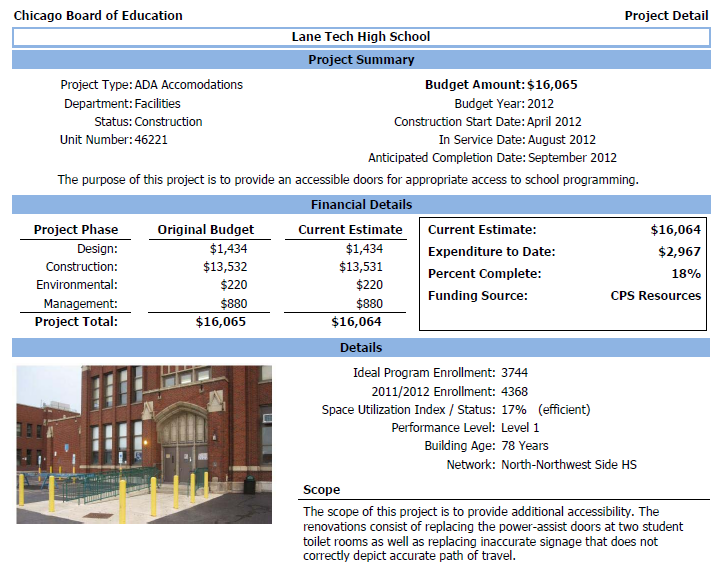 The FY2013 capital budget of $109.7 million will be funded with $69 million from CPS resources, $40 million from the City of Chicago’s new Infrastructure Trust and $1 million from outside grants. New initiatives under the FY2013 capital plan include:
• $3.6 million for playgrounds;
• $5.2 million in preparations for Early College Science Technology, Engineering and Mathematics (STEM) curriculum at Michelle Clark, Corliss and Lakeview High Schools;
• $13.7 million in IT upgrades;
• $5.0 million in chimney repairs and maintenance;
• $4.5 million in building renovations at Oriole Park Elementary School ($2.5 million) and Higgins Academy ($2.0 million); and
• $39.9 million in energy performance improvements, funded primarily by the Infrastructure Trust and grants.

The CIP allocates annual funding for several other major initiatives, which include $3.6 million for playgrounds (included under Facility Site Improvements), $10.0 million for IT investments and upgrades, $5.0 million in chimney repairs and maintenance and $500,000 in FY2013-FY2015 and $10.0 million in FY2016-FY2017 in projects to improve accessibility options under the Americans with Disabilities Act.

The capital plan includes a brief explanation of the rationale for identifying and prioritizing capital needs through the CPS district, as well as a new model timeline for updating the capital budget on an annual basis. The rationale is based on recent changes to the State of Illinois’ School Code, or Public Act 97-0474, which provides guidelines and standards for master capital planning for schools and the development of an Educational Facilities Master Plan. CPS’ Master Plan is expected to be released on January 1, 2013.

In past years the Civic Federation has strongly urged CPS to develop a formal CIP. The Federation supported the action taken by the General Assembly and Governor Quinn to enact Public Act 97-0474, or SB630, signed by the governor on August 22, 2011.  The legislation requires that the District develop a capital needs evaluation process and one- and five-year CIPs.

The National Advisory Council on State and Local Budgeting (NACSLB) and the Government Finance Officers Association (GFOA) have developed best practices in capital improvement planning. In addition, the State of Florida Office of Program Policy Analysis and Government Accountability (OPPAGA) and the Civic Federation have developed several recommended practices in this policy area. A summary of the key recommendations of these practices follows.

1. Develop a Formal Five-Year Capital Improvement Plan
All governments should develop a five-year CIP that identifies priorities, provides a timeline for completing projects and identifies funding sources for projects. The CIP should be updated annually and be approved formally by the governing body.[3]

2. Required Information in a Capital Improvement Plan
A CIP should include the following information: [4]
• A five-year summary list of projects and expenditures per project as well as funding sources per project;
• Information about the impact of capital spending on the annual operating budget for each project;
• Brief narrative descriptions of individual projects, including the purpose, need, history and current status of each project; and
• The time frame for fulfilling capital projects and priorities.

4. Provide Opportunities for Stakeholder Input into Capital Improvement Planning Process
It is important to consider the views of stakeholders, including taxpayers, in developing a CIP. To achieve this goal, stakeholders should have opportunities to provide input into the development of the CIP. These opportunities could include participation in citizen advisory committees and/or hearings during different phases of CIP development. The governing body should hold a public hearing prior to adoption of the CIP, including opportunities for citizen commentary.[6]

5. Require Formal Approval of Capital Improvement Plan by School District Board of Trustees
The CIP should be formally approved by an appropriate governing body. It is imperative that elected officials be fully aware and supportive of long-term plans that commit significant public resources.[7]

CPS should examine its previous CIPs, as well as best practice models from other jurisdictions, for the development of a new CIP.[8]