The “Long” and “Short” of City Asset Deals

In FY2010 the City of Chicago proposes to close a majority of its FY2010 $520 million budget deficit with proceeds it received from the long-term leases of its parking meters and the Chicago Skyway.

This begs the question: how has the City been using the rest of the proceeds from its long-term asset leases?

What did the City do with the Skyway Funds?

The City deposited $500.0 million from the Skyway lease proceeds into a long-term reserve fund. As of September 30, 2009, this fund had $518.1 million on hand; this figure includes the $500.0 million principal and interest earned. 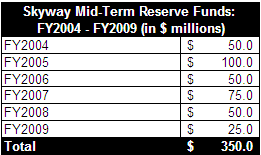 In addition to the mid-term funds that were designated for operating expenses, the City also established a Human Infrastructure Fund with $100.0 million from the Skyway asset lease. Including accrued interest, the City spent $104.0 million over five years for neighborhood and social service programs from this fund. Human Infrastructure is a catch-all category that contains many social service and neighborhood programs.

In FY2005 $15 million of Skyway proceeds were budgeted for numerous operating expenses, including a backlog of payments owed to homeowners as part of the condo rebate program.1 Through FY2009 the City funded other operating expenses with Skyway funds, including Chicago’s Plan to End Homelessness, upgrades to the Chicago Public Library system and low-income home energy assistance, to name a few. 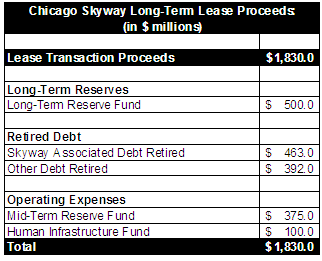 What did the City do with the Parking Meter proceeds?

In 2009 the City leased its parking meters for $1.15 billion to a private operator for 75 years. The City deposited $400.0 million of the parking meter proceeds into a long-term reserve account and set aside the remaining $751.4 million for operating expenses. In February of 2009 the City established a Parking Meter Human Infrastructure Fund with $100 million from the proceeds of its latest long-term lease for operating expenses. 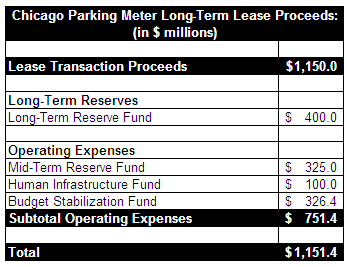 The City is proposing to use a majority of the revenues, $751.4 million, from the parking meter lease for its Corporate Fund operating expenses over the next four years. A total of $325.0 million was set aside in a mid-term reserve account. Assuming an additional $25 million in interest proceeds from mid-term revenue, the City proposed the following initial distribution schedule for City operating expenses through FY2012. 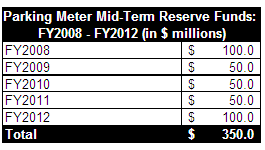 As shown above, the City used $100.0 million to cover operating liabilities carried forward from 2008. The City then proposed to use $50 million for operating expenses in FY2009, FY2010 and FY2011. The City proposed distributing $100.0 million in FY2012. However, in its most recent budget the City is proposing to advance all of its FY2012 mid-term reserves to FY2010 to help close its $520.0 million operating budget deficit.2