CHICAGO – The full market value of real estate in Cook County was approximately $449.8 billion in tax assessment year 2010 according to an annual estimate released today by the Civic Federation. The 2010 total value estimate represents a decline of $100.3 billion, or 18.2%, from the 2009 estimated full value. Tax year 2010 is the most recent year for which data are available. The 2010 estimated decline is the fourth in a row for the whole County, with full value declining by 32.5% since the 2006 peak. 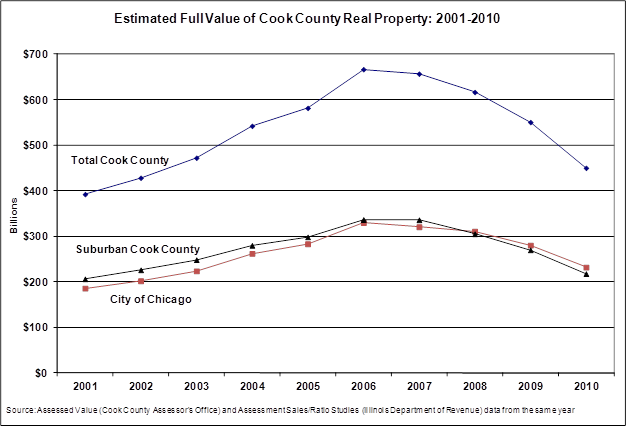 The Civic Federation estimates the full market value of taxable Cook County real estate using two data sources: the total assessed value of property as reported by the Cook County Assessor’s Office and the median level of assessment reported by the Illinois Department of Revenue. The Illinois Department of Revenue collects data on property sales and calculates the ratio of assessed values to sales values. That data is used to compute the mean assessment-to-sales ratio, or the median level of assessment.

The Civic Federation estimates the full value of property by dividing the median level of assessment into the total assessed value of each class of property in Cook County. For those classes for which the Department of Revenue does not calculate a median level of assessment, the level set by County ordinance is used. The estimate does not include railroad properties or properties that are exempt from real estate taxes.

The full value estimate including ten-year trend data, charts and a discussion of the 2010 Assessment/Sales Ratio Study is available at civicfed.org.