Q: Why has the Civic Federation produced the Modernization Report?
A: Cook County’s ability to continue to provide to the public health services, law enforcement and judicial services, tax administration, and official records-keeping is jeopardized by its inefficient operations and outmoded governance structure.

The Civic Federation embarked on the Cook County Modernization Project because it believes these problems must be addressed immediately beginning in December of 2010, when a new President of the Cook County Board of Commissioners takes office. The Modernization Project provides recommendations that can be implemented in the first 100 days of the new administration, as well as others that are more long-term. The goal of those recommendations is to help the new administration create a government that is more efficient, less costly, and more accountable to taxpayers.

Q: What are the major problems facing Cook County?
A: There are two major problems that are hampering Cook County’s operations. The most immediate of those problems is expenditures that exceed available revenues, creating a massive deficit for FY2011. The next problem is that Cook County government is simply inefficient at running the County. The County’s operations are decentralized, duplicative, and reactive, and inefficient – and have led to the loss of outside funding, exposure to litigation, and decreased employee productivity.

Q: How did Cook County end up in such a mess?
A: Cook County has neglected modernizing its operations for years. County Officials have acknowledged that County government is inefficient and that there is significant room for improvement, but previous administrations have failed to act. Some County problems, such as the 2008 sales tax increase, are recent developments. Other issues, such as the County’s pension system and the funding sources for the health system, are structural and have been a problem for some time.

Q: Why does Cook County have such a large deficit and how can it be closed?
A: The simplest explanation why the County’s budget deficit is so large is that the County has a structural deficit, or chronic mismatch between expenditures and revenues. The County’s main expense is personnel, which accounts for 79.2% of the FY2010 General Funds budget. Despite some reductions in staffing, cost-of-living adjustments and other compensation increases have offset those savings. Between 2004 and 2010, the cost per employee grew 24%, despite the County’s workforce being reduced by 2,700. Below is a chart that illustrates the ten-year surplus/deficit trend for the County. 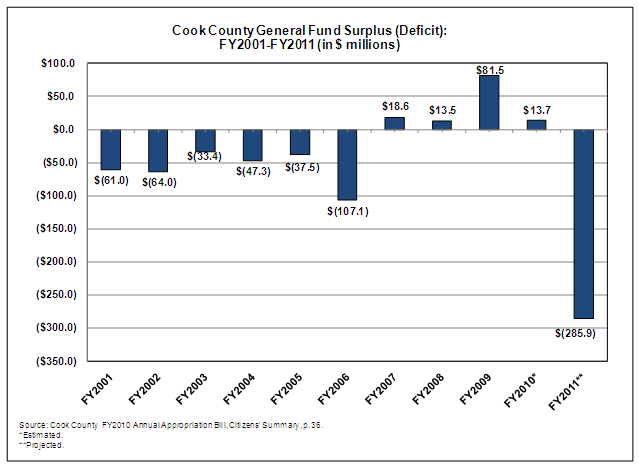 The Civic Federation projects that the County will face a budget deficit in FY2011 of more than $300 million. This amount includes a projected FY2011 deficit of $285.9 million plus the $31.7 million in reduced revenues due to a sales tax rollback recommended by the Federation that would accrue in FY2011. To close the deficit, the County must focus on reducing expenditures, either through across-the-board cuts or preferably targeted spending reductions. The County will need to significantly decrease personnel expenditures, which comprise 79.2% of General Funds appropriations in FY2010.

Q: Where did the reforms detailed in the Cook County Modernization Plan come from?
A: The recommendations included in this plan are a mixture of new ideas and previously proposed solutions that have not been implemented by previous County administrations. These evidence-based recommendations come from close analysis of budget documents, conversations with Cook County officials, and input from government policy experts. It is our hope that these recommendations will be implemented by the new administration and that policymakers and citizens alike will track progress and demand transparency and accountability. The cooperation of elected officials is key to most, if not all, of the major recommendations contained in this document.

The Modernization Plan includes a large number of recommendations for the first 100 days of the new administration; the full list can be found on page 120 of the report. Some of these recommendations propose that the new Cook County Board President:

The Civic Federation has also prepared a list of short-, mid-, and long-term recommendations for the County. That list, which starts on page 136 of the Modernization Plan, includes the following:

Q: How will the Civic Federation follow up to see if its recommendations are being implemented?
A: The Federation will issue a report on the progress made by the new administration after the first 100 days, and then annually during its analysis of the County’s budget.