On February 8, 2012, the Chicago Park District Board of Commissioners unanimously voted to provide the Institute of Puerto Rican Arts and Culture (IPRAC) $243,407 in funds from the District’s personal property tax replacement (PPRT) receipts. The PPRT is a corporate income tax that is collected by the State of Illinois and remitted to local governments; it was implemented in 1979 after local personal property taxes were abolished.

The monies for the Institute will come from the District’s annual tax-based subsidy to the “Museums in the Park,” which are Chicago cultural institutions located on Park District property. The current Museums in the Park members agreed to accept IPRAC as the organization’s eleventh member and to reduce their own PPRT allocation for FY2012 to fund the Institute’s subsidy. The Board indicated that it is their intent to provide IPRAC with an additional $243,407 in FY2013 from either the District’s property tax levy or PPRT receipts. The Park District Board also stated that it will support IPRAC’s development into an accredited museum in partnership with Museums in the Park. The total amount of PPRT revenues provided to the Museums in FY2012 is $2.9 million.

The Institute of Puerto Rican Arts and Culture was founded in 2001 and is located at 2459 West Division Street in Chicago. Its mission is to promote, integrate and advance Puerto Rican arts and culture by presenting exhibitions and programming. It is located on Chicago Park District property in Humboldt Park.

Museums in the Park

Illinois statute 70 ILCS 1505/19 specifies the financial relationship between the Chicago Park District and the cultural institutions:

• The Chicago Park District is permitted (not required) to levy taxes (up to 15 cents per $100 of assessed value) for the operation and maintenance of the Shedd Aquarium and the other institutions located on Park District property;
• The District is required to allocate a portion of the personal property replacement tax (PPRT) revenues it receives annually to the Museums; and
• The District is empowered to sell bonds for certain Aquarium and Museum (A&M) capital improvements and to levy property taxes to pay for debt service on those bonds.

The Aquarium and Museum Operating Fund

The A&M Operating Fund was established by State statute, enacted in 1933 and amended in 1935, to provide funds for operating and maintaining the institutions’ buildings and grounds. The Fund monies are derived from property tax and PPRT revenues. An annual lump sum from this fund is transferred to Museums in the Park, which then allocates the funds to each institution. Revenues are distributed in the year following the levy’s authorization. In FY2012 total support from the A&M Operating Fund totaled $30.6 million. Park District operating support for the cultural institutions has steadily declined over time, falling by 17.8% or $6.6 million from the FY1999 subsidy of nearly $37.3 million. 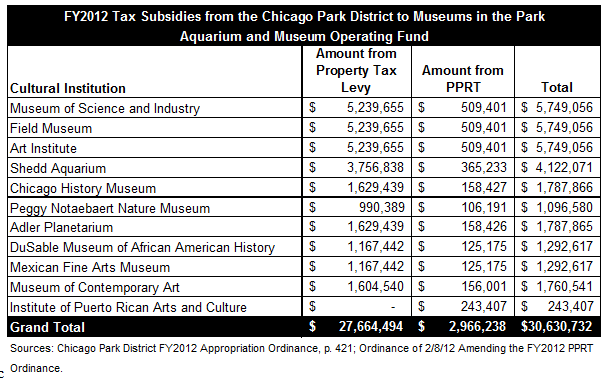 Under legislation enacted in 1971, the Park District may use special bond issues to fund up to 50% of expenditures for certain approved capital improvement projects by the cultural institutions. Under the terms of an agreement between the Park District and the museums, the Park District reviews proposed projects to ensure that they meet certain standards for design and construction, that they comply with Minority and Women Business Enterprise laws, and that they conform to the pre-determined allocation of proceeds among the member institutions (Information provided by the Chicago Park District Budget Office, May 15, 2003). 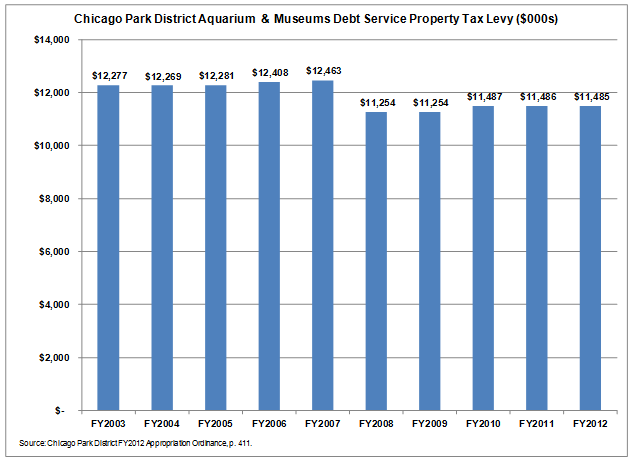