Cook County Board to Consider Increase to Elected Officials’ Salaries

Update (May 11, 2022): The Cook County Finance Committee deferred the ordinance that would increase Cook County elected officials’ salaries and will hold a separate special meeting later this month to discuss the ordinance. This action was taken following a letter submitted by the League of Women Voters of Cook County requesting the Board provide more notice to the public and hold a separate hearing on the issue. While the League of Women Voters supports the salary increases, the League raised concerns about transparency, noting that the salary increases were not disclosed until six days before the scheduled vote, rather than at the time of the item’s introduction the previous month. The League’s letter opposed automatic annual increases without a Board vote on them and raised important questions about the appropriateness of differences between salaries and whether Cook County salaries might begin to outpace other jurisdictions.

The issue was first raised in fall of 2021 when the County Board approved a resolution to conduct a study of elected officials’ compensation and provide recommendations to the Board about potential compensation increases. The resolution called for a market rate survey to compare Cook County officials’ salaries to those of other counties and determine if the current compensation is appropriate or if increases are warranted.

The last time the salaries for these elected positions were increased was in 2002, and 2000 for the Clerk of the Circuit Court. The resolution noted that inflation has increased by 45% over the past 20 years.

The Cook County Bureau of Human Resources consulted with Deloitte to analyze the market survey data, based on a comparison of 20 peer counties—6 counties in Illinois and 14 counties across the rest of the country. The peer counties were selected based on their population size, budget, number of county workers and organizational structure.

The compensation study released in March found that the Cook County salaries for each elected official’s position are below the median salaries in the peer counties. 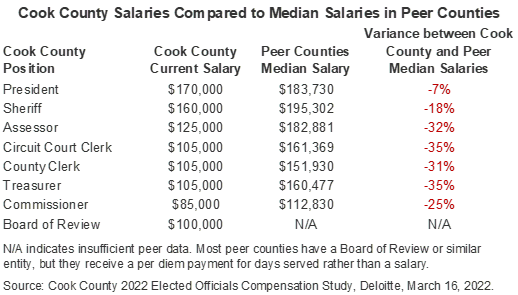 The Cook County Board initially introduced a proposed ordinance at its April 7 meeting that would increase the salaries of the elected positions. However, the salary increases were left blank with no dollar amounts provided, so the increases were unknown until a substitute ordinance was posted several days before the Cook County Finance Committee is set to consider it on May 11.

Based on the proposed substitute ordinance, the salaries of the elected positions would each increase by 10% in the first year of the new term in office—FY2023 (beginning on December 1, 2022) for the majority of the positions, and FY2025 for the Clerk of the Circuit Court, whose current term does not end until November 30, 2024. Each year thereafter, the salaries would increase by another 3% or by the Chicago region CPI rate, whichever is less. These automatic annual increases would continue every year going forward until the County Board of Commissioners votes to repeal or amend the annual increase.

The automatic increases in each year going forward bring into question whether the Cook County salaries would eventually outpace the market rates based on peer counties, or whether there should be future comparison studies. The Deloitte compensation study indicates that annual increases to elected officials’ salaries are not common practice in other jurisdictions, as elected officials’ salaries are often set by statute without annual increases.

The current and proposed salaries over the next four years are shown in the table below. Overall, they represent a 20% increase through FY2026. The cost of the 26 positions combined based on current salaries is $2.5 million. That would increase to approximately $3 million in FY2026 if inflation surpasses 3% annually, a total increase of 20%.

The Deloitte compensation study also noted that Cook County is the only county that provides an annual premium to the County Board Finance Committee Chair. In Cook County, the Finance Chair receives an additional $5,000 in addition to their annual salary. None of the 20 peer jurisdictions provide the Finance Committee Chair with additional compensation, with one exception. In Wayne County, Michigan, the chair of each standing committee receives an additional $4,000 and the chair of each special committee receives $2,000. The compensation study recommended that Cook County maintain the Finance Chair annual premium on the assumption the Finance chair has sizable extra duties, but to not increase the premium given that no peer counties provide extra compensation for this position.

Any salary changes must be approved by June 1, since the Local Government Officer Compensation Act requires the salaries of elected officers of units of local government to be set at least six months before the beginning of the terms in office. As noted above, the County President, Board of Commissioners, Clerk, Sheriff, Assessor, Treasurer and Board of Review all have new terms beginning in December 2022. The Clerk of the Circuit Court’s next term begins in December 2024.

The proposed salary increases ordinance will be considered at the Cook County Finance Committee meeting on May 11, 2022, followed by the full Board of Commissioners on May 12.