The full market value of real estate in Cook County was nearly $635 billion in tax assessment year 2019 according to an annual estimate released today by the Civic Federation. The 2019 total value estimate represents an increase of $25.2 billion, or 4.1%, from the 2018 estimated full value. Tax year 2019 is the most recent year for which data are available. The 2019 estimates represent the seventh year that real estate values in Cook County increased following six straight years of decline in value.[1]

“While the estimated full value of Cook County real estate for tax year 2019 remains slightly below the peak from tax year 2006, this seventh consecutive year of growth is positive sign that the real estate market continued to recover following the Great Recession but is still impacted by that recession’s lingering effects, and does not yet include the impact of the COVID-19 pandemic,” said Civic Federation President Laurence Msall. Prior to 2007, the estimated full value of real estate in the City of Chicago and suburbs grew every year going back to at least 1995. “It’s important to note that any influence of the pandemic, the resulting recession or recent inflationary pressures on real estate values are not incorporated into this report but will be in the coming years.”

Between 2010 and 2019 the estimated full value of all classes of property in Cook County as a whole increased, with the exception of Class 5b industrial properties in Chicago and the southwest suburbs, which saw a decrease of 25.9% and 0.7%, respectively. 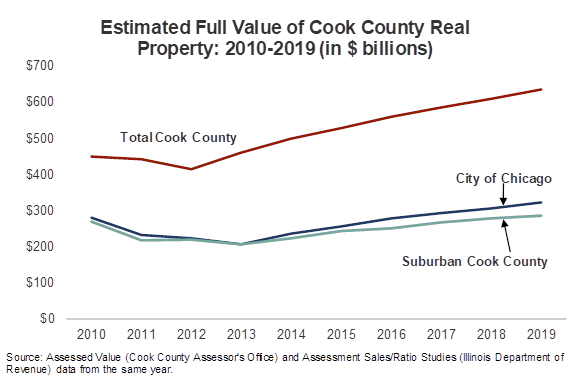 The full market value estimates in this report are based on two data sources: the total assessed value of property as reported by the Cook County Assessor’s Office and the median level of assessment reported by the Illinois Department of Revenue. The Illinois Department of Revenue collects data on property sales and calculates the ratio of assessed values to sales values. That data is used to compute the mean assessment-to-sales ratio, or the median level of assessment.