The Federal Reserve Bank of Chicago and the Civic Federation co-hosted a sold-out conference earlier this month on the timely topic of infrastructure spending in Illinois. Speakers from around the country discussed best practices in infrastructure planning and possible funding sources as Springfield mulls over a major new capital spending program.

To see speaker presentations, visit the event page on the Civic Federation’s website.

Opening Remarks: If You Build It: A Guide to the Economics of Infrastructure Investment

Professor Diane Whitmore Schanzenbach opened the conference with a discussion of the economics of infrastructure investment. She laid out the case for why governments should invest in infrastructure, including a recent decline in productivity growth that could be related to substandard infrastructure. Although public investment has slowed in recent years, low interest rates mean that it is a good time to invest so that the sectors of the economy that rely on transportation infrastructure can operate most efficiently. Governments should choose wisely as to which investments to make, keeping in mind that the highest returns in investment accrue to repair and maintenance. While there are different arguments for federal, state or local decision-making on infrastructure spending, any process should be insulated from political influence as much as possible. Finally, when deciding how to pay, user fees such as tolls are best. However, debt financing can also be appropriate because infrastructure spending requires an immediate large expense that is followed by a stream of revenue. So while a government may not have the wherewithal to make the initial investment from current revenues, the funding thrown off by the completed project can be subsequently used to pay off the debt incurred to make the initial expense. Public-private partnerships are also sometimes helpful, but it is important to recognize that such agreements are not free money and the government must continually monitor the performance of the private vendor.

Panel I: Building and Infrastructure Plan that Meets Critical Needs

The first discussion panel took on the topic of building an infrastructure plan that addresses a jurisdiction’s needs. There is wide bipartisan agreement in Illinois that there is an urgent need to repair and improve transportation infrastructure. But the state did not follow best practices in assessing the condition of capital assets and identifying priorities for spending scarce infrastructure resources in its last capital plan a decade ago. How should Illinois decide what to spend and where? The speakers and moderator Graham Grady, Partner at Taft Stettinius & Hollister LLP, addressed this topic and more.

Nicholas Donohue, Deputy Secretary of Transportation for the Commonwealth of Virginia, described that state’s well-regarded infrastructure spending prioritization process called SMART SCALE. The bipartisan initiative requires an objective and quantifiable process for the allocation of construction funds that is mode neutral and recognizes the differing needs of different parts of the state. Professor Michael Pagano, Dean of the University of Illinois at Chicago College of Urban Planning and Public Affairs, emphasized the need for maintenance spending on infrastructure assets, despite budgetary pressures that de-emphasize asset maintenance and political pressures that reward spending on new infrastructure that is visible to constituents. Tom Kotarac, Vice President of Transportation and Infrastructure at the Civic Committee of the Commercial Club of Chicago, outlined the business community’s efforts to reform Illinois’ capital bill process to include performance measurement and management and sustainable revenue sources. Chicago Transit Authority President Dorval Carter detailed the myriad challenges the CTA faces in finding funding to maintain the transit system in the absence of a state capital plan. President Carter said that the CTA has capital needs of $23 billion, which includes a backlog of $12.5 billion. The City of Chicago’s transit tax increment financing (TIF) partnership with the CTA has provided much-needed funding to overhaul elderly rail lines, but there is only so much funding that can be provided locally without causing financial distress. He concluded by saying that the CTA is a valuable asset to Illinois and the state must invest in it.

Panel II: Bang for Your Bridge? How Should (And Shouldn't) Illinois Fund Infrastructure?

Illinois’ infrastructure needs are outpacing its existing revenue structure. However, before it embarks upon a capital spending program, state leaders must identify sufficient, reliable long-term sources of funding. The second panel and moderator Elizabeth Coolidge, Managing Director and Head of the Midwest Region for UBS, discussed the experience of other states in exploring innovative revenue sources and the particular challenges facing Illinois.

New Michigan Governor Gretchen Whitmer in her first budget proposed a bold plan to increase the gas tax in order to fix the state’s crumbling roads for the long run. Rachael Eubanks, Michigan’s Treasurer, said that the state ranks in the bottom tier of states in terms of infrastructure investment and its roads have been ranked last in the nation in terms of quality. She said the governor’s plan would see Michigan join dozens of other states that have recently raised their gas taxes and would put the state on course to see 90% of its roads in good or fair condition by 2029. Carol Spain, Director at S&P Global Ratings, examined Illinois’ current capital funding structure, its poor financial condition and its capacity to borrow significant amounts of money for a new capital plan. Illinois has stagnant motor fuel tax revenue and a relatively high debt burden compared to other states. She said that overall, Illinois is in a weaker position to finance debt given its financial distress but must also consider that the state’s economy could suffer if it does not find a way to fund infrastructure spending. Ted Hamer, Managing Director of KPMG LLP, emphasized the changing nature of mobility around the world, which will require governments to look outside of the motor fuel tax to fund infrastructure spending. Alternative funding models such as tolls, congestion fees and partnerships with the private sector should all be on the table. Finally, Mitchell Holzrichter, Partner at Mayer Brown, gave an overview of the State of Indiana’s long-term lease of its toll road, which provided billions of dollars in proceeds that were primarily spent on the maintenance of roads and bridges across the state while transferring revenue risk to the private sector.

Keynote Panel: The Political Challenges of Selling an Infrastructure Plan to a Skeptical Public

Civic Federation President Laurence Msall moderated a luncheon keynote panel with three reporters who cover infrastructure issues: Jason Grotto, of ProPublica Illinois, Yvette Shields of The Bond Buyer and Mary Wisniewski of the Chicago Tribune. The discussion focused on the political roadblocks facing Illinois lawmakers as they consider a major capital plan. The poor planning and unreliable revenue sources used in the previous Illinois capital plan, as well as general public distrust of the intentions of elected officials, means that although residents recognize the need for infrastructure upgrades, they are leery of any increases to the motor fuel tax or other usual sources of capital revenue. The City of Chicago’s infamous parking meter deal has also soured the potential option of public-private partnerships to a large portion of Illinois residents. In all, the reporters concluded that Illinois politicians had a hard road ahead of them to convince Illinoisans that tax dollars spent on infrastructure will be used efficiently and effectively. 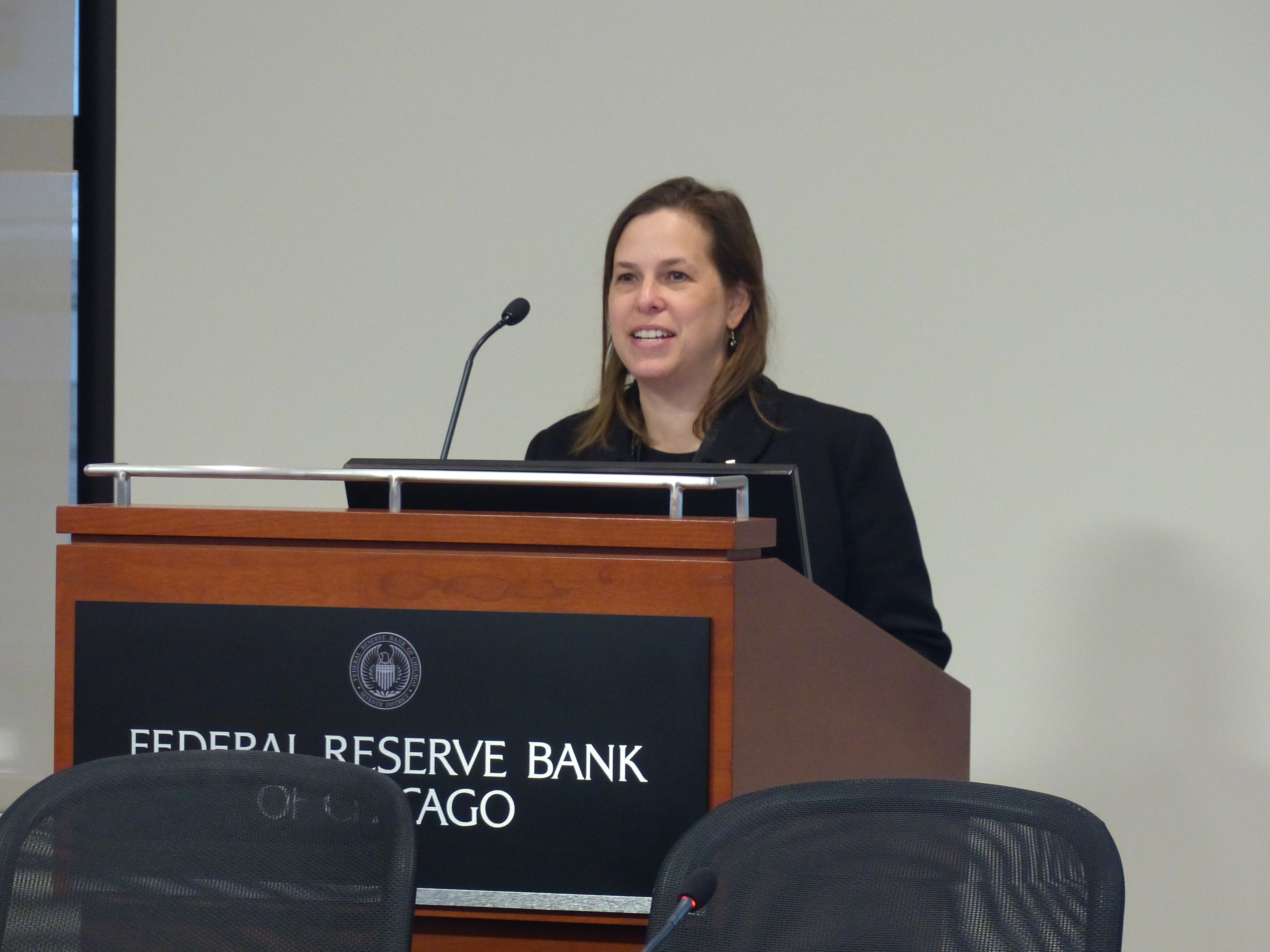 Northwestern University Institute for Policy Research Director Diane Whitmore Schanzenbach opening the forum with, “If You Build It: A Guide to the Economics of Infrastructure Investment.” 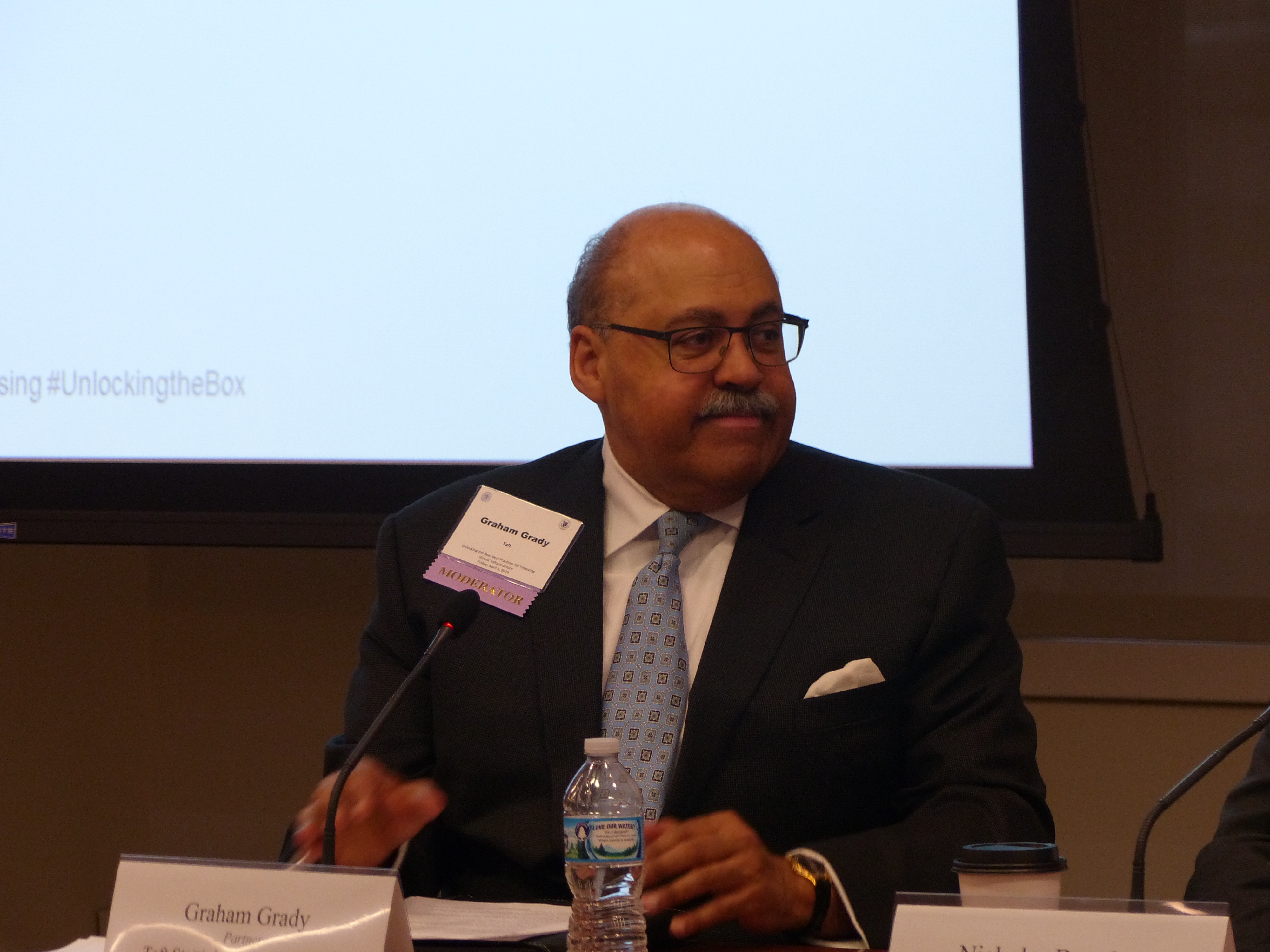 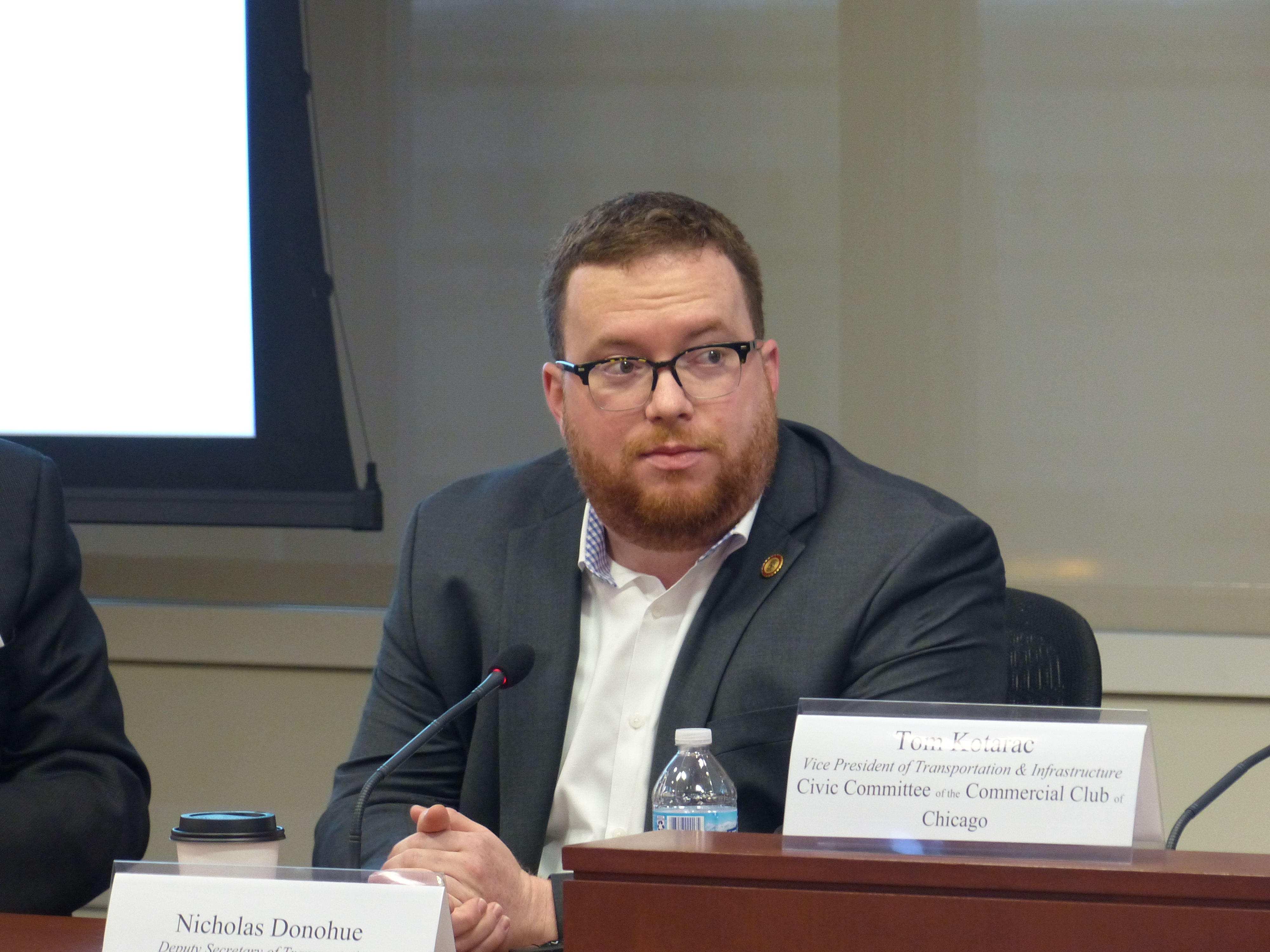 Nicholas Donohue presenting during Session I. Tom Kotarac presenting during Session I. Michael Pagano presenting during Session I. 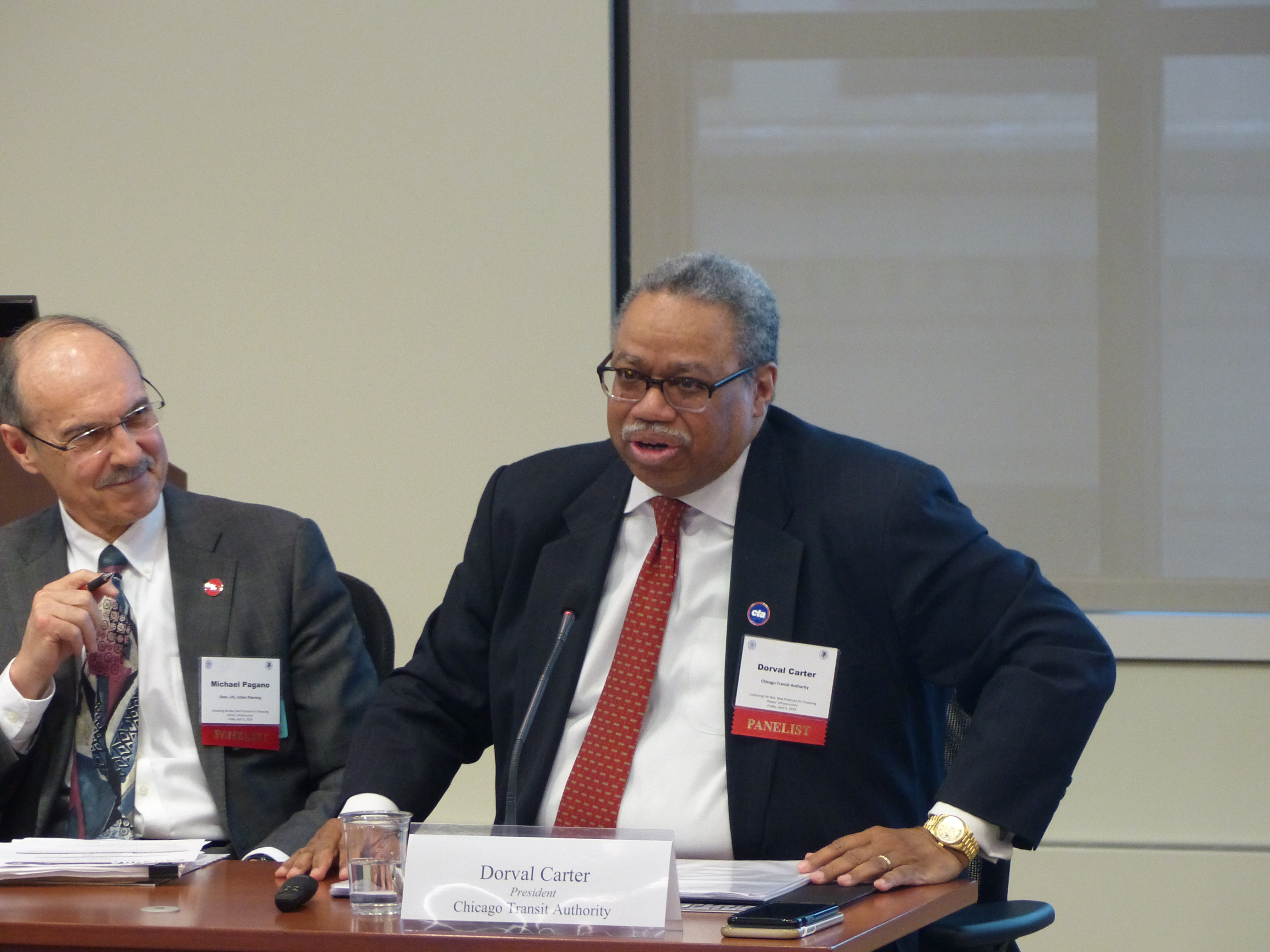 Dorval Carter presenting during Session I. 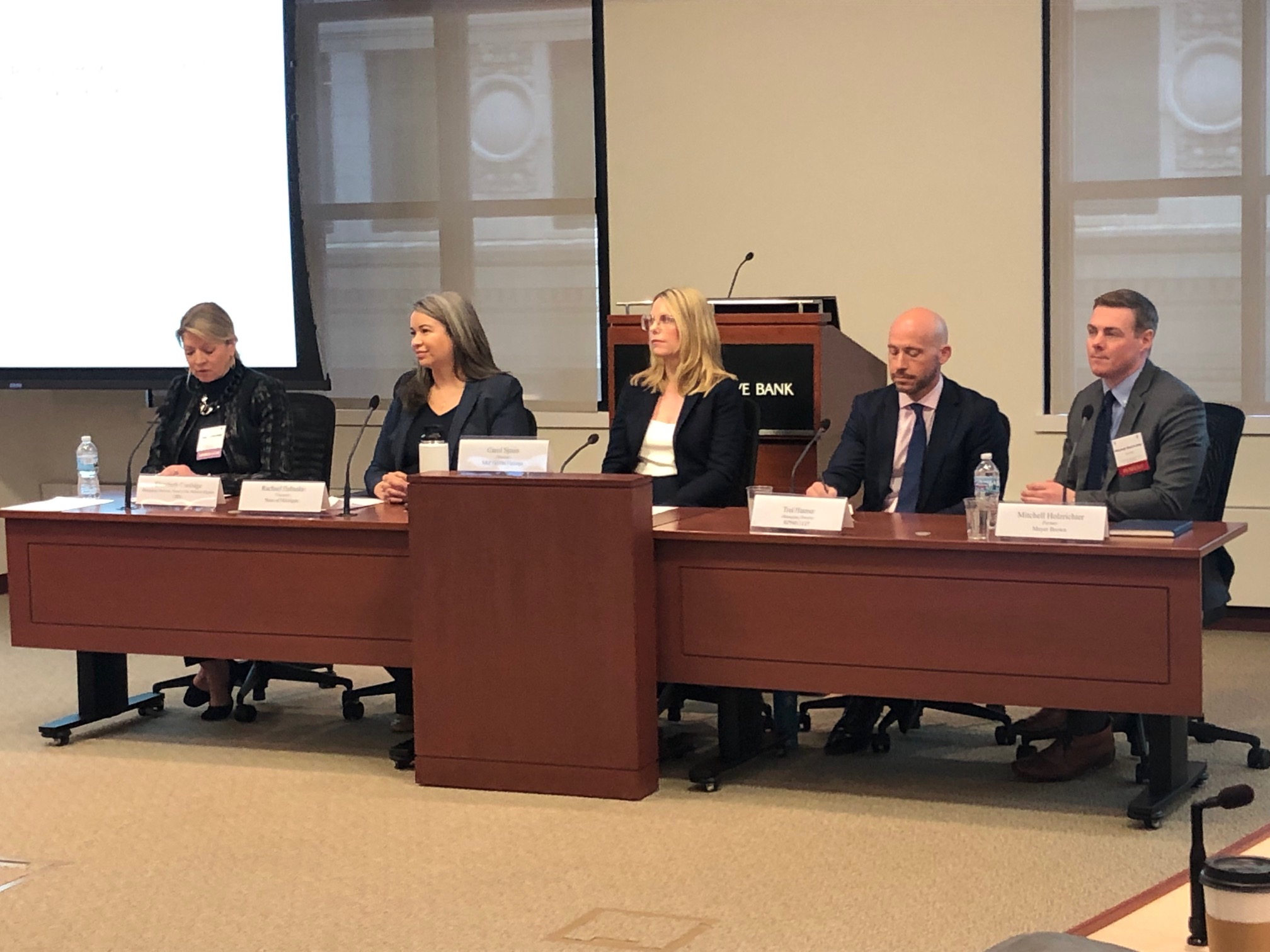 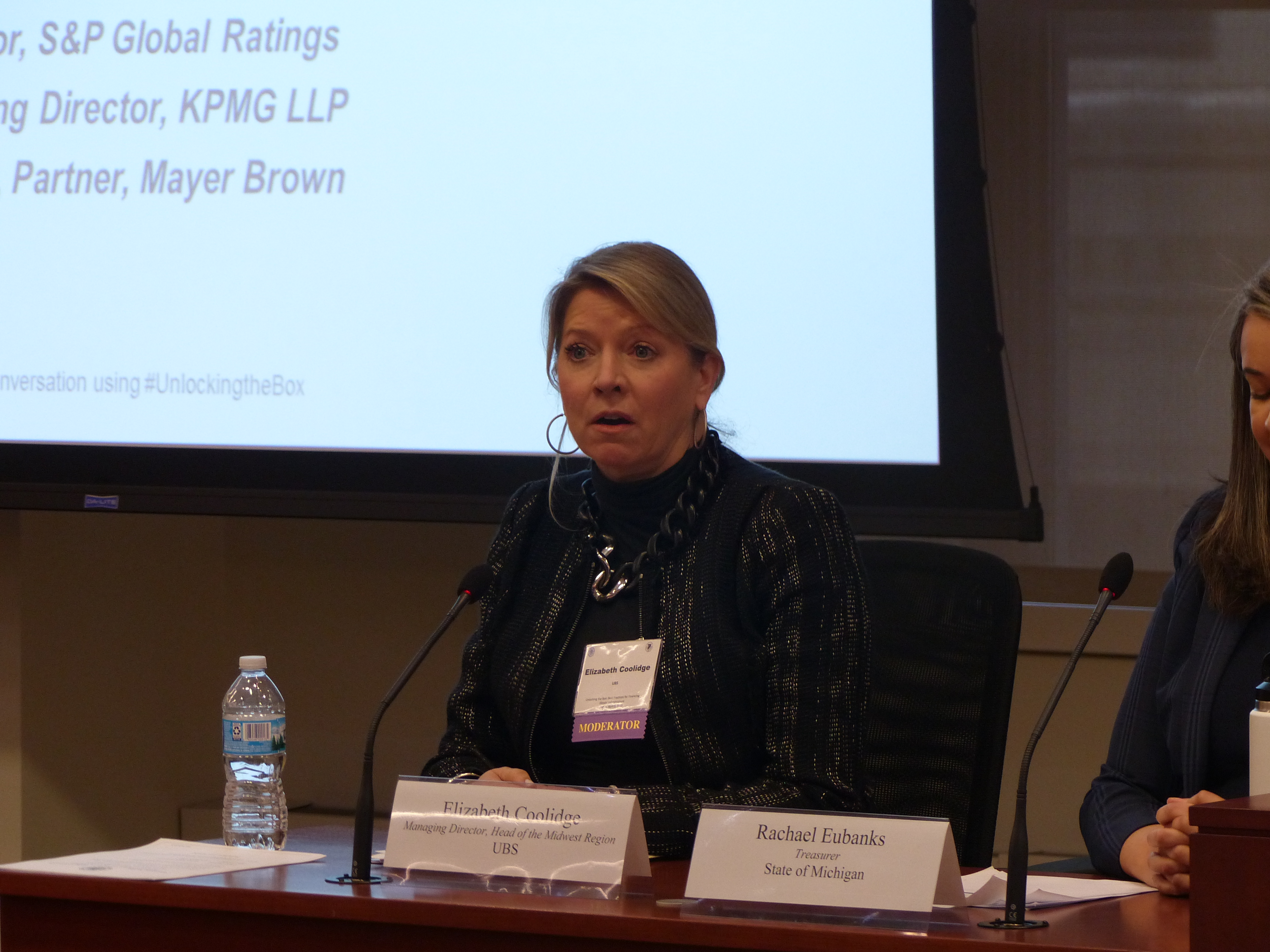 Elizabeth Coolidge moderating Session II: Bang for Your Bridge? How Should (and Shouldn’t) Illinois Fund Infrastructure? 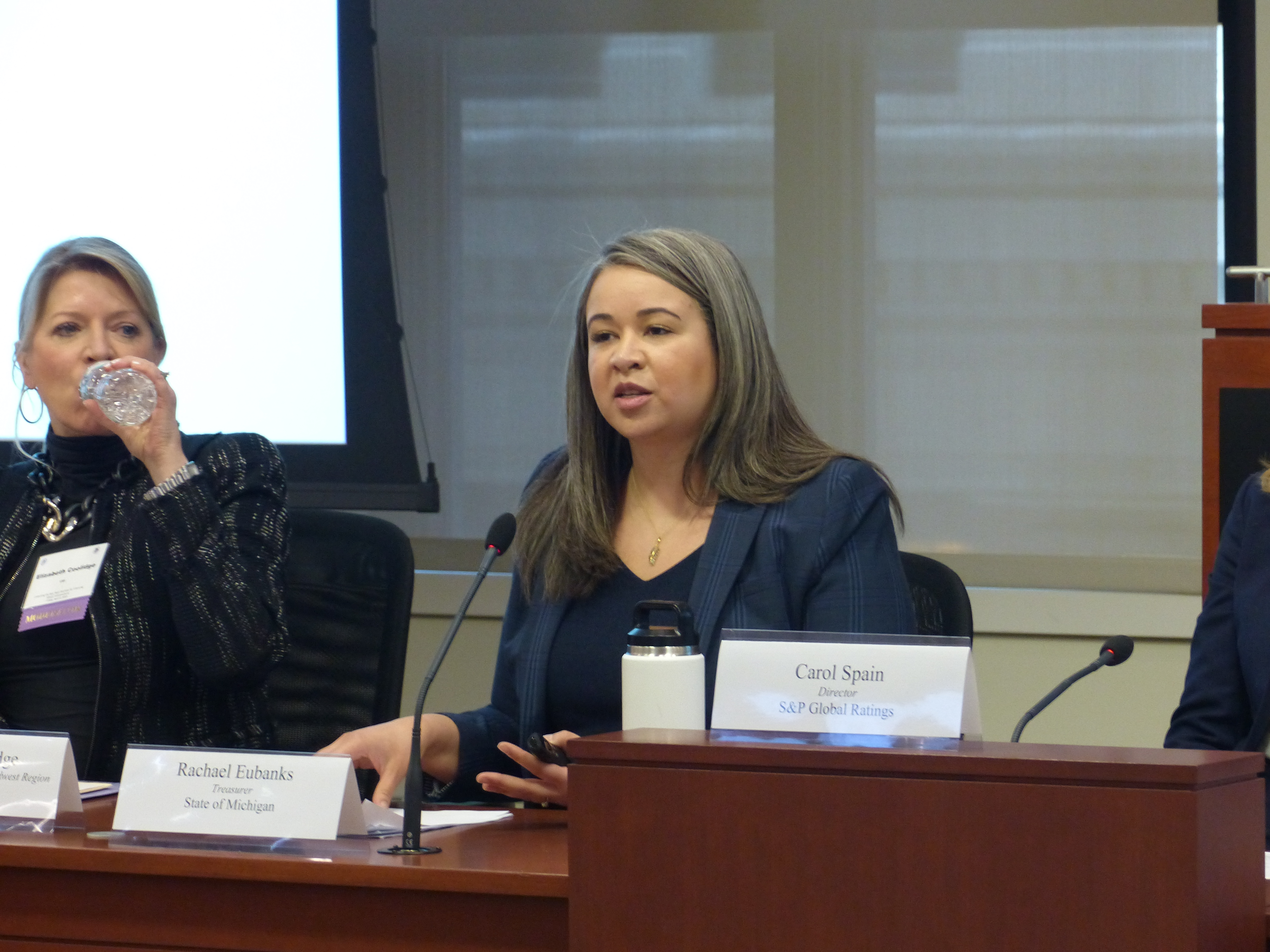 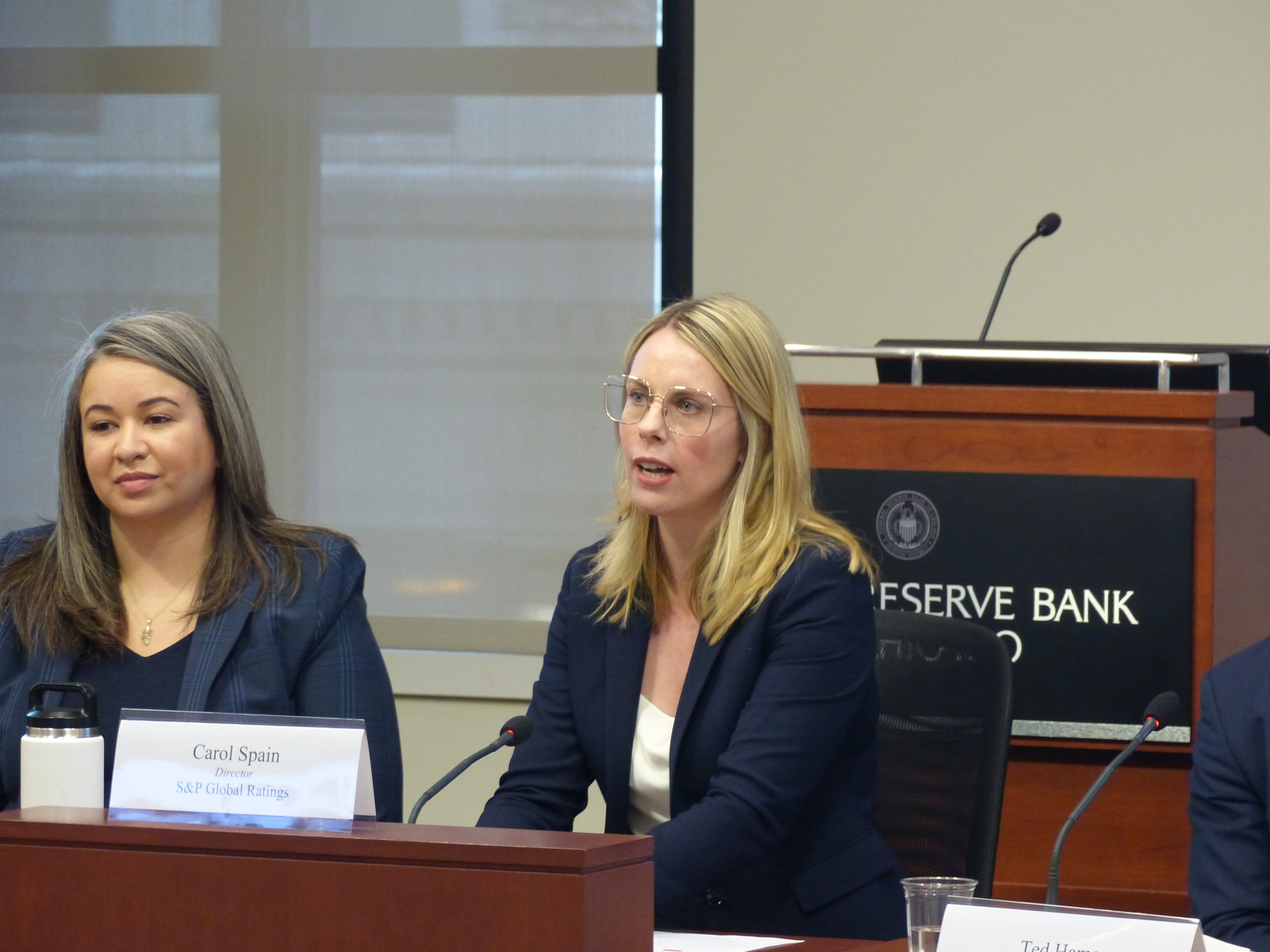 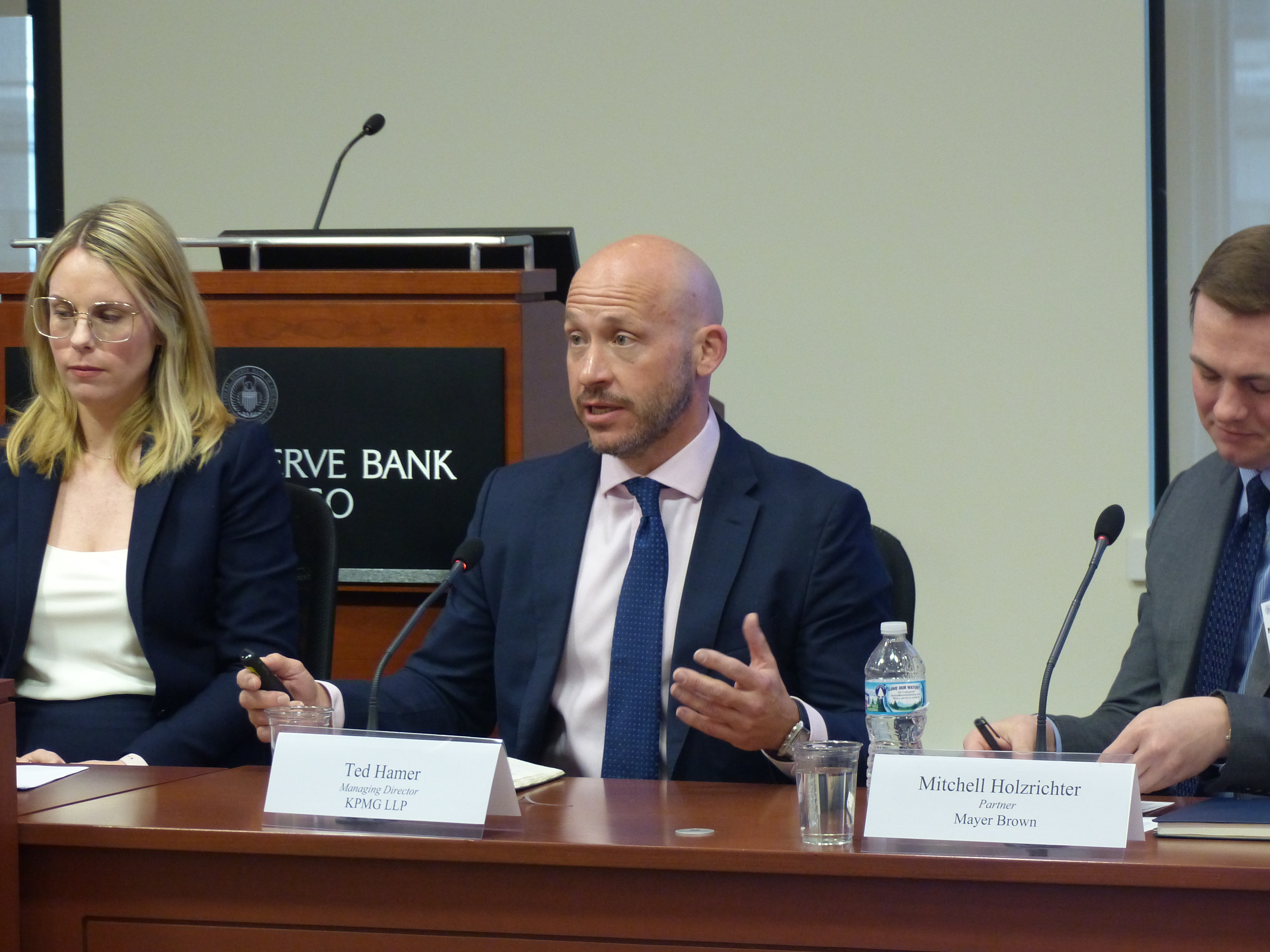 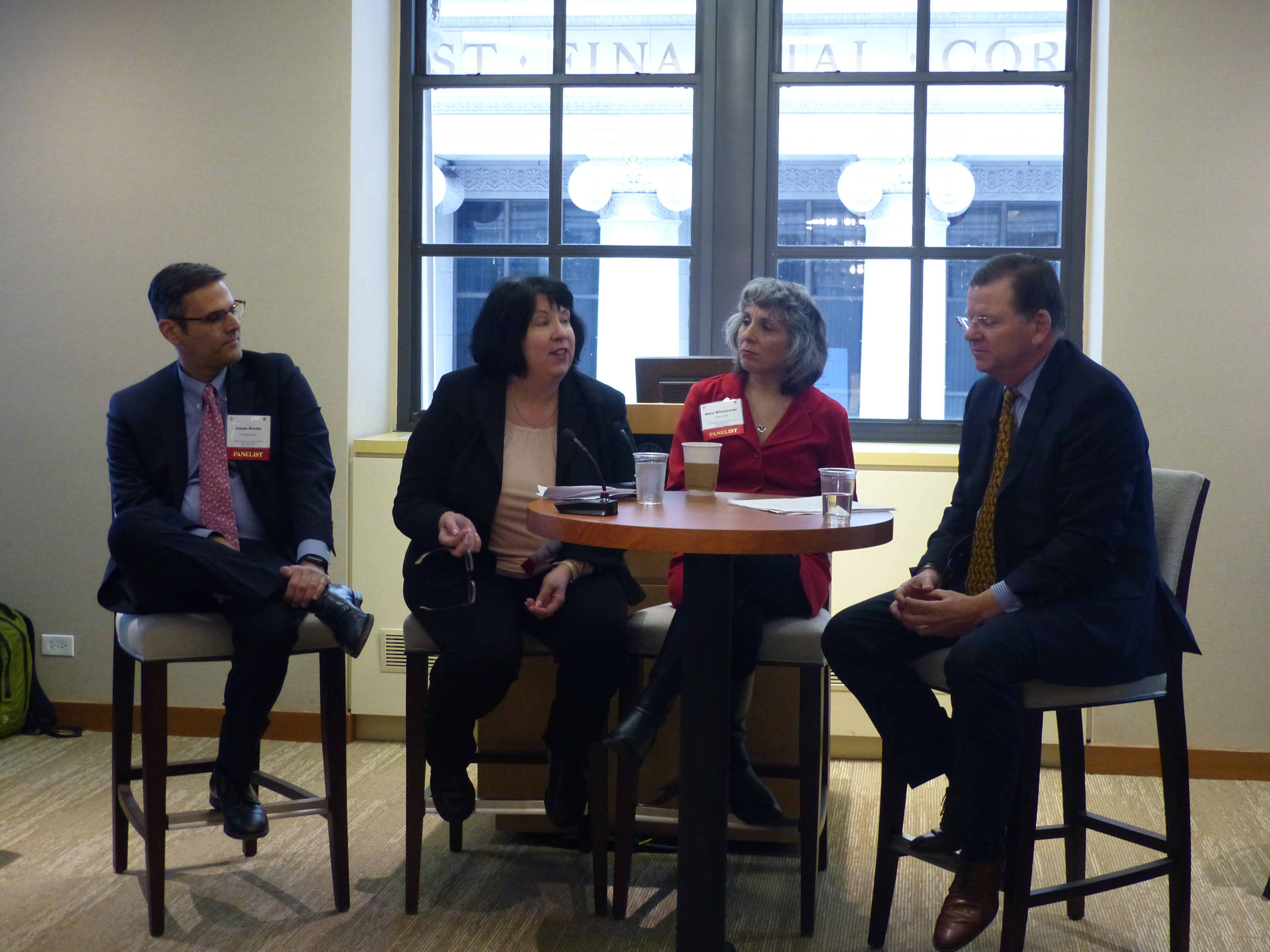 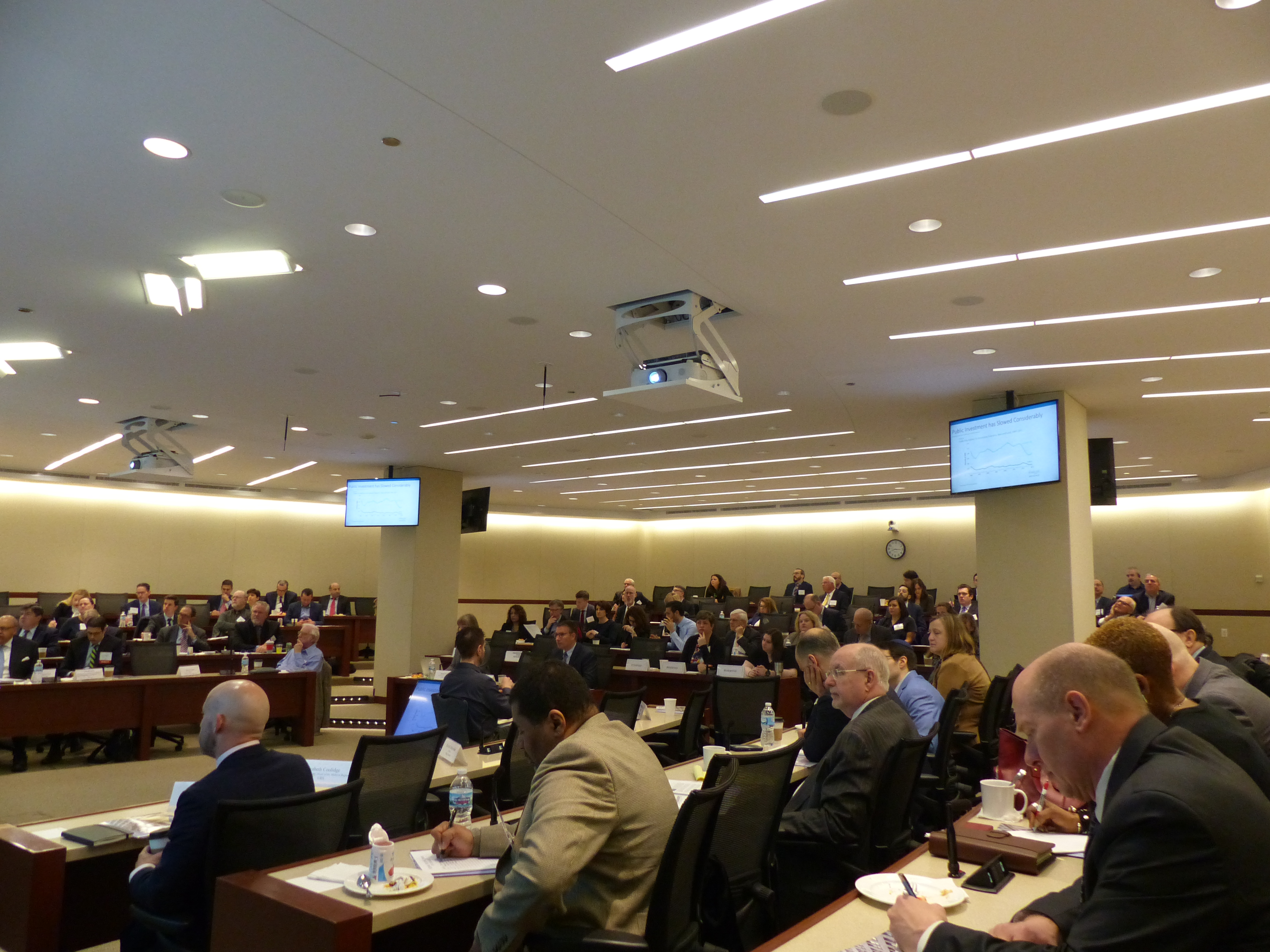 Guests at the “Unlocking the Box: Best Practices for Financing Illinois’ Infrastructure” forum.
Previous Next