On June 16th at the Hilton Chicago, the Civic Federation honored the outstanding civic leadership of John A. Buck, Chairman and Chief Executive Officer of the John Buck Company, with the Lyman J. Gage Award for Outstanding Civic Contribution by an Individual. Walgreens, a drugstore chain with thousands of locations across the United States, received the Addams-Palmer Award for Exemplary Civic Involvement. Walgreen Co. Chairman and Chief Executive Officer Gregory Wasson accepted the award on behalf of his company. Read more about the Civic Federation Awards here.

The luncheon was attended by over 500 of Chicago’s and Illinois’ most prominent business, civic and government leaders.

Cook County Board President Toni Preckwinkle gave the salutation address. Board President Preckwinkle congratulated Walgreens and John A. Buck for their civic commitment to Chicago. She noted that a healthy democracy requires an open and transparent government, an independent media and organizations such as the Civic Federation that are dedicated to providing analysis and evaluation of government programs.

After a break for lunch, Civic Federation President Laurence Msall recognized the past honorees and numerous civic and government leaders in attendance and introduced Civic Federation Chairman Thomas E. Livingston. Chairman Livingston discussed some of the Federation’s major accomplishments in the past year and acknowledged the hard work of the luncheon co-chairs. Chairman Livingston also recognized the important role the members of the Civic Federation Board have in guiding the Federation’s policy discussions.  Chairman Livingston then introduced Luncheon Co-Chair Patricia Hemingway Hall, Chief Executive Officer of the Health Care Service Corporation. Before introducing fellow Luncheon Co-Chair Andy McKenna, Ms. Hall emphasized the importance of Walgreens and the John Buck Company to Chicagoland’s business landscape.

Luncheon Co-Chair Andy McKenna then presented the Addams-Palmer Award for Exemplary Civic Involvement to Walgreen Co. Chairman and Chief Executive Officer Gregory D. Wasson. A fixture in neighborhoods across the country for over 110 years, Walgreens is among the Chicago area’s largest companies and is the nation’s largest drugstore chain with over 244,000 employees and FY2010 sales of $67 billion.

In his presentation speech, Mr. McKenna emphasized Walgreens’ numerous philanthropic initiatives to improve the health of Chicagoans. Many Walgreens locations in “food desert” areas of Chicago now provide fresh fruit, vegetables, meat and dairy. The company has also partnered with Northwestern Memorial Hospital and the Komed Clinic to improve the care of diabetes. A recent free blood glucose screening program, promoted on the “Oprah Winfrey Show,” resulted in over 80,000 people having their blood tested.

Moreover, Walgreens is doing its part to reduce its impact on environmental systems. By building stores to LEED standards, using solar panels to power stores and reducing the use of plastic bags, among many other initiatives, Walgreens is demonstrating its desire to implement environmentally sustainable practices.

The Lyman J. Gage Award for Outstanding Civic Contribution was presented by luncheon Co-Chair Lester Crown to John A. Buck, Chairman and Chief Executive Officer of the John Buck Company.

Mr. Buck, a 40-year resident of Chicago with roots in Texas, moved to Chicago after earning a law degree from the University of Texas. In 1981 he founded The John Buck Company, which has acquired or developed over 45 properties with a total square footage of over 28 million.

John Buck has long expressed an interest in promoting more educational opportunities for Chicago youth. His company’s annual Spring Fling event has raised millions for organizations such as Boys and Girls Foundation of Chicago, the Golden Apple Foundation and the Legacy Charter School. For over 30 years, Mr. Buck has supported the Big Shoulders Fund, which provides Catholic school scholarships to needy children. Mr. Buck and his wife Kathi are also heavily involved with the San Miguel Schools, which operates campuses in the Austin and Back of the Yards communities and with whom he has served as past Chairman of the Board of Directors.

The annual Civic Federation luncheon serves as a tribute to the honorees’ commitment to the Chicago area. The generous support that the Civic Federation receives from this event also allows the organization to continue its efforts to promote rational tax policies and to improve government efficiency. 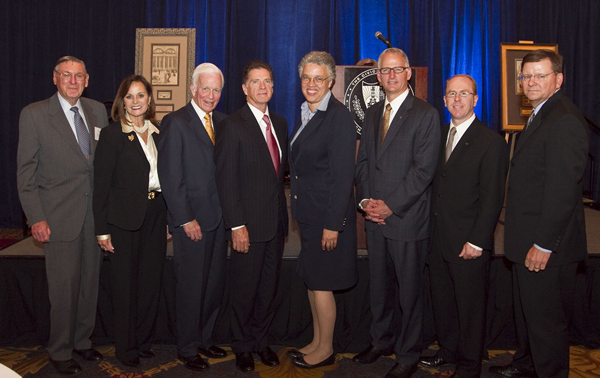