The Office of the Clerk of the Circuit Court of Cook County saw a change in leadership for the first time in 20 years in 2020. The change in administration presented an opportunity for meaningful reform of an office that had been notorious for corruption, delays and substandard constituent service. The Civic Federation, in partnership with the Chicago Appleseed Center for Fair Courts and the Chicago Council of Lawyers, issued a series of recommendations prior to the 2020 November election for the new Circuit Court Clerk, and have been tracking progress made on those initial recommendations since the new Clerk took office in December 2020.

Our coalition of organizations recently issued a progress report examining progress made on those recommendations within the new Clerk of the Circuit Court’s first full year in office. The findings are summarized below.

Circuit Court Clerk Iris Martinez also released her own report, State of the Clerk’s Office, detailing progress within her first year in office on December 1, 2021, the one-year anniversary of Clerk Martinez being sworn in as Clerk of the Court.

The Clerk of the Circuit Court oversees all of the court records and files within the Cook County Circuit Court. The Office, considered a quasi-judicial entity within the judicial branch, serves in an administrative role, providing record management and administrative support in courtrooms and courthouses across Cook County. The Clerk also collects all fines and fees ordered by the Court and distributes fine and fee payments to other government agencies.

The Clerk of the Circuit Court in each county in Illinois is an elected position, unlike the Illinois Supreme Court and Appellate Courts, which appoint their clerks. The clerical nature of the Circuit Court Clerk’s responsibilities—administrative functions rather than policy-making functions—has raised questions as to why the position should be elected at all.

The Clerk of the Circuit Court’s budget is approved by the Cook County Board of Commissioners as part of the Cook County budget. The Clerk of the Circuit Court’s adopted budget for the current 2022 fiscal year (December 1, 2021 - November 30, 2022) is $125.1 million (excluding grant funds). This includes $105 million in the Public Safety Fund (which is part of the County’s general operating fund) and $20.2 million in special purpose funds. The Clerk has four special purpose funds: Administrative, Electronic Citation, Document Storage and Automation. Together these four funds are budgeted for $15.8 million in expenditures in FY2022. In addition, the FY2022 budget allocates $4.4 million in federal American Rescue Plan Act COVID-19 relief funding to the Circuit Court Clerk. The Clerk’s FY2022 appropriations of $125.1 million represent an increase of $5 million, or 4%, from the prior year.

The Clerk of the Circuit Court is budgeted for 1,466 full-time equivalent (FTE) personnel positions in FY2022 in the general operating and special purpose funds. This represents an increase of 93 FTE positions, or 6.7%, from the prior year. As shown in the chart below, the Clerk’s staffing levels have decreased over time, from a high of over 2,000 in FY2010 to a low of 1,373 in FY2021—a decrease of 32.6%.

Over time, the number of case filings in the Cook County Circuit Court have also declined, but at a faster rate than staffing levels have declined. The number of court cases filed in Cook County decreased by over 50% between FY2008 and FY2019, and fell another 35% in FY2020.[1] 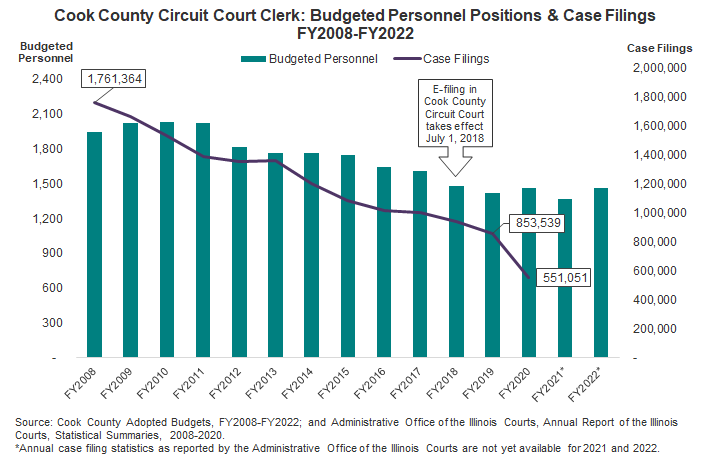 Progress on Recommendations for the Circuit Court Clerk

New Directions for the Office of the Clerk of the Cook County Circuit Court: Recommendations for Planning and Transitioning to New Leadership, released in September 2020, provided a comprehensive set of recommendations for the next Circuit Court Clerk, covering a variety of areas including management, technology, transparency, ethics and public access. The report included an ambitious timeline of recommendations to be completed within the new officeholder’s first 30 days, first six months, and first year in office. The first update, released in April 2021, examined progress made on our recommendations within the Clerk’s first 100 days in office.

The following table lists each of the 24 recommendations and the status on progress the Clerk’s Office has made toward each within the Clerk’s first year in office based on the new first year progress report.

Only three of the recommendations listed in the table above have been fully completed. The Clerk of the Circuit Court established an emergency remote operation plan and executed a new collective bargaining agreement with the Teamsters Local 700 union representing Clerk’s Office employees. Additionally, the Circuit Court established remote capabilities for court hearings in direct response to the COVID-19 pandemic (though this was initiated by the Cook County Chief Judge).

Many of the recommendations have been initiated or are in progress, but require further steps to be taken.

The Clerk did not conduct an operational or desk audit upon taking office, which was a central recommendation of the New Directions report. The office initially focused on understanding the management issues inherited from the prior administration and on hiring to fill vacant positions. The Clerk’s Office said the need for additional new positions this year was identified through discussions with operational managers and executive clerks. We continue to recommend that the Clerk perform a comprehensive evaluation of staffing levels based on workloads, the volume of court activity and the integration of technology systems. The Clerk should create a staffing plan aimed at improving efficiency and operational processes which better align with new technologies. We encourage the Clerk’s Office to enlist outside assistance in completing the recommended audit and strategic planning process.

The Clerk’s Office has been working diligently toward completion of migrating case records to a new case management system. The new case management system is integral to the Clerk’s Office’s capability to share data and transmit information to other criminal justice system agencies. The Traffic Division is the final division that needs to be migrated to the new system.

The Clerk’s website has been down since a data breach that occurred in August 2021. A temporary landing page has been put in place while the Clerk’s Office works with the Cook County Bureau of Technology to build a new, secure site.

Going forward, we hope to see the Clerk’s Office take up our recommendations on ways to improve the electronic filing system including surveying users and working with the vendor, Tyler Technologies, to significantly streamline and simplify the e-filing process. We encourage the Clerk of the Circuit Court to implement a long-term strategy to streamline electronic filing, implement electronic order entry and eventually move toward remote online access to case documents.

The New Directions one-year progress report provides several recommendations related to improving communication with the public, including by issuing public announcements and making information about the Clerk’s operations, policies and finances readily available on the Clerk of the Circuit Court website. Until the website is fully functional, the availability of information to help court users and members of the public is very limited.

In Illinois, the judicial branch, including Circuit Court Clerks, is not subject to the Freedom of Information Act (FOIA), as are other government agencies. This effectively gives court entities full discretion over what information and data they will release, despite the fact that court records are open to the public for inspection. Without sufficient data, system stakeholders and the public cannot evaluate how effectively, efficiently and fairly courts are working. In the absence of FOIA, our report suggests several ways the Clerk of the Circuit Court can voluntarily release information and data within the office’s purview, including by posting the following to the Clerk’s website: office policies; financial audits and budget information; daily court docket information and schedules; navigational court system information, including information about facilities, locations, the types of court cases handled at each location and what time court calls are scheduled; data about court case volumes; operational performance metrics; and media releases about court initiatives.

Additionally, we recommend the Clerk designate staff to handle external research and media requests and create a policy for how the processing of requests will be handled. The policy should be posted on the Clerk’s website, along with instructions and contact information for the appropriate staff person to whom information requests should be directed. The Clerk’s Office maintains that it is unable to release any data regarding Circuit Court cases, including aggregate information, without approval from the Office of the Chief Judge. We further recommend that the Clerk of the Circuit Court work with the Chief Judge to revise court policies regarding disclosure to streamline the process for responding to external information and data requests.

The Clerk has expressed an interest in improving access to court facilities and services for people with disabilities or limited English. The Circuit Court Clerk is planning to establish a new call center that will offer language translation in 200 languages and TTY capability for those with hearing impairments. The Clerk’s Office has also focused on increasing staff training and cross-training to improve customer service.

However, the Clerk has not designated staff for the purposes of centralized these access-to-justice initiatives under one division or official. We continue to recommend that the Clerk appoint a Chief Accessibility Officer and a Chief Public Service Officer to oversee initiatives and ensure coordination and uniformity of policies and practices across divisions and courthouses.

The Clerk of the Circuit Court is making steady progress toward federal court requirements of the Shakman Consent Decree, which is aimed at removing political factors in the Clerk’s employment practices. Several steps the Clerk’s Office still needs to take in order to reach substantial compliance are to finalize amendments to the Employment Plan, provide Employment Plan training to all staff and finalize an Employee Handbook.

We believe this structure still presents inherent conflict of interest, especially in cases of complaints against the Clerk or executive level staff. However, given the direction the Clerk’s Office has chosen to pursue, we recommend that the Clerk do two things to improve accountability and transparency of the Circuit Court Clerk’s Inspector General: 1) Move security and facilities management functions out of the Inspector General’s Office and to another portion of the Clerk’s budget so that the Inspector General can focus on appropriate responsibilities; and 2) The Inspector General should establish policies and procedures based on best practices in order to ensure real independence, including an enabling ordinance that sets a mission, principles, and parameters that define its scope and responsibilities, and standards through which the IG will perform investigations, inspections, evaluations and reviews. These policies and procedures should be made publicly available.

For more on these and other recommendations for the Clerk of the Circuit Court, read the full progress report here.

[1] The steep drop in 2020 is likely due at least in part to court closures and slowdowns in court activity due to the COVID-19 pandemic.