On April 9, 2022 the Illinois General Assembly passed the three bills that comprise the FY2023 budget and FY2022 supplemental appropriations. On April 19 the Governor signed the bills into law. The FY2023 budget was passed nearly two months earlier than in previous years because the State’s primary election was moved to June from the usual March date and the General Assembly adjourned early to accommodate members’ campaign schedules. The FY2023 budget passed by the General Assembly is similar to the budget proposed by the Governor with a focus on using higher than expected revenue to pay down the State’s debts and to make supplemental pension and Rainy Day Fund contributions. The main differences include higher revenue projections and increased spending across many areas of the budget, in addition to a larger total Rainy Day Fund contribution.

This blog will explore the trends between the amended FY2022 budget and the FY2023 budget, as well as the differences between what the Governor proposed and the General Assembly approved. For more information about the Governor’s proposed FY2023 budget, see the Civic Federation’s analysis, released in March.

Prior to the passage of the enacted budget, there were a number of issues the Governor and General Assembly needed to address, including how to repay the $4.5 billion the State borrowed from the Department of Labor to pay unemployment benefits during the worst of the pandemic and how to spend hundreds of millions in additional projected revenues for FY2023. The Governor’s proposed FY2023 budget stated that the Administration was working with the General Assembly, business and labor leaders to reach an agreement on how much should be appropriated for the unemployment trust fund and from what sources.[1] In late March, prior to the passage of the budget, the Governor and Democratic leaders in the General Assembly announced an agreement to use $2.7 billion of the approximately $3.5 billion in remaining federal American Rescue Plan Act (ARPA) funding to repay the Unemployment Insurance Trust Fund borrowing. Additional resources will be needed to pay off the remaining $1.8 billion in unemployment debt.

The Governor’s FY2023 budget proposed $1 billion in tax and fee relief programs. The programs included a one-year freeze on the scheduled cost of living increase in the motor fuel tax, a one-year holiday from the State sales tax on groceries, a one-time increase in the State property tax rebate and a one-year waiver of licenses fees for healthcare workers and liquor license fees for bars and restaurants. The enacted FY2023 and supplemental FY2022 budgets added additional programs such as direct property tax rebate checks and a sales tax holiday for a total of $1.8 billion. The changes are explored below.

Before delving into comparing the FY2023 budget to the prior year, it is important to look at changes made to the FY2022 revenue projections. The Civic Federation blog on the FY2023 Proposed Budget highlighted the fact that FY2022 revenue collections have continually exceeded expectations, which led the Governor’s Office of Management and Budget (GOMB) to make upward revisions to projected FY2022 revenues as part of the proposed FY2023 budget released February 2. The most recent projections used in the FY2023 enacted budget accounted for revenues received through the beginning of April 2022, and further reinforced these trends. The table below illustrates the revisions from the Governor’s FY2023 budget release in February 2022 to the most recent data. 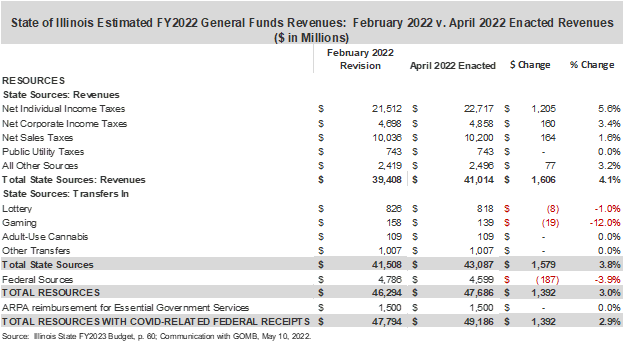 Overall, total General Funds revenues for FY2022 are expected to increase an additional $1.4 billion, or 2.9%, from the projections in the Governor’s FY2023 proposed budget. The largest increase occurs in projected net individual income taxes, which is a 5.6%, or $1.2 billion, increase.  Net corporate income tax and sales receipts are also projected to increase by $160 million and $164 million, respectively.  These changes provide important context when examining revenue changes between FY2022 and FY2023, as decreases in FY2023 revenues are largely due to the circumstances that propelled extraordinarily high revenues in FY2022 and that are not expected to recur in FY2023. For more about the reasons GOMB believes revenues are higher than originally projected, see the Federation blog about the Governor’s proposed budget and budget analysis.

The enacted FY2023 General Funds budget projects a total of $46.4 billion in revenues, including $4 billion in federal funding, but does not include ARPA funds. The General Funds support the regular operating and administrative expenses of most State agencies and are the funds over which the State has the most control. The operating budget also includes Other State Funds, which are accounts for activities funded by specific revenue sources that may only be used for specific purposes, and Federal Funds (other than those designated for General Funds), which support a variety of State programs with federal revenues.  The remaining revenues that are not included in the General Funds are restricted for specific purposes, shared through revolving funds between government agencies, held in trusts or generally not available for discretionary spending by the General Assembly.

The table below shows the change in General Funds revenues between the amended FY2022 budget and the enacted FY2023 budget. Overall, revenues are projected to decrease by $1.26 billion, or 2.6%. Net individual income tax receipts are projected to decrease by $140 million, or 0.6%, from FY2022 projections. Net corporate income tax receipts show an estimated 5.1%, or $250 million, decline from FY2022 April estimates.  GOMB attributes this largely to a projected decline in corporate profits resulting from fading federal stimulus effects and artificially high FY2022 numbers from changes in corporate income taxes enacted in the FY2022 budget, which shifted some revenues from FY2021 to FY2022.[2]

Net sales tax receipts are expected to decrease by $120 million between FY2022 and FY2023 based on the end of federal pandemic stimulus packages and a projected shift in consumer spending back to services, which the State of Illinois largely doesn’t tax, from goods, which it does.[3]

Total General Funds receipts from State-source revenues other than income and sales taxes are projected to decrease by $208 million, or 1.6%.Transfers and adjustments, such as lottery, gaming and cannabis revenues show a predicted decline of $60 million.  Of all transfers and adjustments in FY2023, only lottery receipts are expected to decrease by $153 million, or 18.7%, less than FY2022 levels.  The reduced forecast derives from a proposed change to the State Lottery Law aligning transfers payable between the State Lottery Fund, Common School Fund and Capital Projects Fund.[4] Adult-use cannabis receipts and gaming receipts forecast 30.3% and 12.9% gains, respectively.

Federal sources are projected to decrease by $599 million between FY2022 and FY2023.  This decline is primarily attributed to the anticipated end of enhanced federal Medicaid match payments after the first quarter of FY2023. Additionally, the FY2022 budget included $1.5 billion in ARPA funds transferred to General Funds. The FY2023 General Funds budget does not include ARPA funding for revenue replacement. 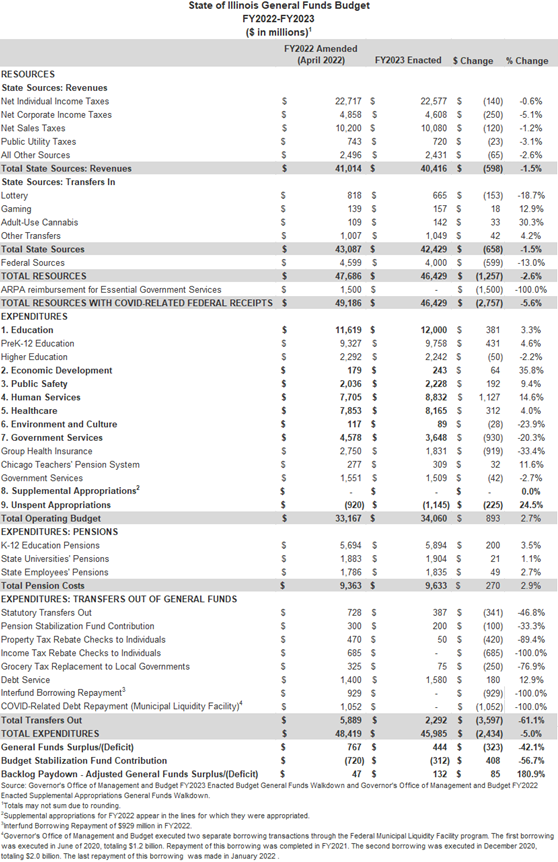 The General Assembly’s FY2023 budget includes nearly $46.0 billion in total expenditures. The base spending for this fiscal year is about $2.4 billion or 5.0% less than the amended FY2022 budget.

The enacted FY2023 budget and supplemental FY2022 spending, similarly to what was proposed by the Governor, will eliminate payment delays in the employee and retiree health insurance program and contribute $720 million in FY2022 and $312 million in FY2023 to the Budget Stabilization Fund.[5] The deposits are the first steps toward building a budgetary reserve that will be sufficient to help Illinois through future financial uncertainty. The General Assembly approved the Governor’s recommendation to make $300 million in supplemental pension appropriations in FY2022 and $200 million in FY2023.[6]

The State’s total Agency spending—not including State pension systems contributions, debt service, statutory transfers and COVID-related debt repayments—totals $34.1 billion in the General Assembly’s budget. This represents an increase of $893 million or 2.7% from $33.2 billion in FY2022. It is also an increase of $710 million above the Governor’s proposed FY2023 operating spending levels, with most major areas of the budget except Environment and Culture and Group Health Insurance receiving some kind of increase. It is also important to remember that the total amended FY2022 appropriations include over $1 billion in supplemental appropriations for the state employee health insurance backlog and other areas of the budget. Highlights of the enacted FY2023 budget include:

As the table reflects, the amended FY2022 and enacted FY2023 budgets enacted one of the tax and fee relief measures from the proposed budget:

Other proposals remained, but with important changes:

[5] The Governor proposed a total of $879 million in Budget Stabilization Fund contributions.