The Illinois Property Tax Extension Limitation Law (PTELL) limits the growth of a taxing district’s property tax levy to 5.0% or the rate of inflation, whichever is less.[1]  Taxing bodies annually can choose to increase the amount of property tax dollars they seek (the “levy”) up to the PTELL limit, to a lesser amount, or they can forego an increase.[2]

The PTELL law applies to all non-home rule jurisdictions, including counties, municipalities and special districts in 39 of the state’s 102 counties. Home rule jurisdictions such as the City of Chicago or Cook County are not subject to the law, although some have approved voluntary limits. PTELL is often referred to as the “tax cap” law.

Property taxpayers in affected counties may be in for a case of sticker shock in 2023 when they receive their tax bills for taxes levied in 2022. For the first time in over three decades, inflation will be well over 5.0%, thus allowing affected governments to increase their levies up to the 5.0% PTELL limit if they so choose. In contrast, the inflation linked PTELL limit in tax year 2021 for taxes payable in 2022[3] was only 1.4%.

The Civic Federation supports extending the PTELL law to all Illinois counties. Where it has been applied, PTELL has effectively protected taxpayers from larger tax increases that would have been possible without PTELL while the real estate market was rising. Extending PTELL statewide would effectively limit property tax increases in inflationary real estate markets and reduce confusion for taxpayers and taxing districts as the same property tax limitations were applied in all counties.[4]

PTELL was approved in response to rapid property tax levy growth in the suburban Chicago collar counties of DuPage, Kane, Lake, McHenry and Will in the 1980s. In 1991 it was applied by statute to those counties. In 1994, it was expanded to Cook County. As the Cook County government is a home rule jurisdiction, the law did not apply to the county government itself. Two years later all Illinois counties were given the option to hold a referendum on whether the non home-rule taxing districts in those counties should be subject to PTELL.

Today 39 counties have implemented PTELL. Of that number, 33 counties have approved tax caps by referendum while in the remaining six PTELL was implemented by statute.  PTELL referenda have failed in 10 counties.[5]

PTELL is intended to limit the dollar amount (not the rate) of property tax revenue that a taxing district may receive. However, the dollar limit must be converted into a tax rate in order to be billed to taxpayers. The PTELL tax rate for a district is called the “limiting rate”.

The PTELL limiting rate does not “cap” taxable value of property, property tax bills, or even the total property tax extension of a taxing district subject to the law. In fact, it does not completely limit the total extension of a taxing district because some funds and some equalized assessed value (EAV)[6] are excluded from the limiting rate calculation.

Tax levies for purposes including certain bonds, special service areas, and special education and recreation for persons with disabilities are explicitly excluded from the “aggregate extension” of a taxing district subject to PTELL. The EAV for new property, annexed property, recovered TIF increment, and expired incentive value is also excluded from calculation of the PTELL limiting rate. [7]

The rate of inflation used for PTELL calculations is the national Consumer Price Index (CPI) for all urban consumers for the year preceding the tax year. It is the December to December change in CPI-U for all items and all urban consumers published by the United States Bureau of Labor Statistics in January of each year. For example, the tax year 2021 (payable in 2022) CPI was 1.4%. In tax year 2022, payable in 2023, CPI will be 7.0%. This marks the first time since PTELL first went into effect in tax year 1991 (payable in 1992) that the rate of inflation will exceed 5.0%.[8] Because CPI exceeds 5.0%, the maximum limiting rate of 5.0% will apply. The CPI limit can also be raised by voters through a local referendum. [9] 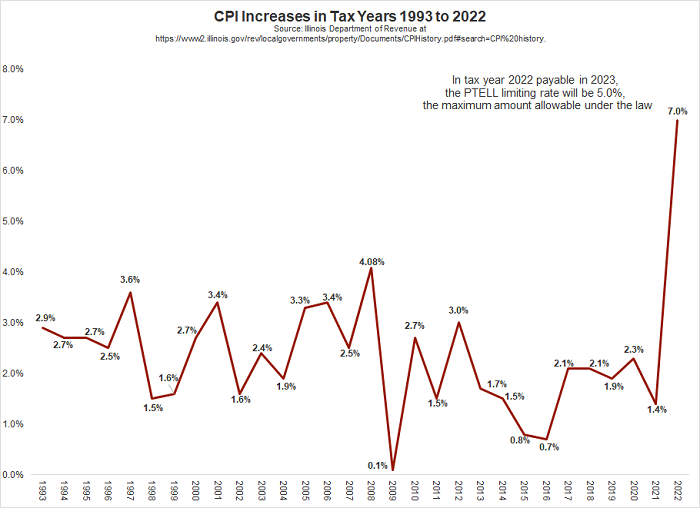 If the district’s levy exceeds the maximum for funds subject to the tax cap, the County Clerk must reduce the aggregate extension accordingly.

Chicago is a home rule unit of government that is not subject to the PTELL law. However, in 1993 the Chicago City Council approved an ordinance imposing a cap of 5% or the rate of inflation, whichever is less, on property tax levies. The ordinance exempted levies required to pay off existing general obligation (GO) debt, but placed new GO debt under the cap.[10] However, in many years after 1993, City leaders decided not to increase property taxes to the rate of inflation. Though on several occasions, the City did waived the cap. Most recently, Chicago raised property taxes by more than CPI in 2015 in order to pay for police and firefighters’ pensions.

In 2020 the City Council approved an ordinance that would index – that is, automatically increase - the property tax levy by CPI.[11] The City uses the same source as the State of Illinois uses to calculate annual inflation increases under PTELL.[12] Given that the allowable CPI increase for the 2022 levy, payable in 2023 will be 5.0%, the City can, if it so chooses, increase its levy by that amount next year.

[2] Some functions for which local governments collect property taxes are not subject to the tax cap, such as debt service. Additionally, governments can ask voters to approve increases higher than the PTELL limit via referendum. See “What is a PTELL Referendum and How Does it Work?” for more about these referenda. https://www.civicfed.org/civic-federation/blog/what-ptell-referendum-and-how-does-it-work

[3] There is a two-year billing cycle for Cook County which creates a one-year lag between the property tax levy and property tax collection. The tax year is the year in which properties are assessed and reflects the value of the property as of January 1 of the same year. Actual tax bills are paid in the next year when the Cook County Clerk calculates new tax rates for each taxing district. So the property taxes collected in the current 2022 calendar year are for taxes levied for tax year 2021. See Civic Federation. Understanding the First Installment Property Tax Bill, February 12, 2016 at https://www.civicfed.org/civic-federation/blog/understanding-first-installment-property-tax-bill#:~:text=It%20is%20important%20to%20note%20that%20there%20is,as%20of%20January%201%20of%20the%20same%20year.

[6] Equalized Assessed Value or EAV is the taxable value of real estate in a jurisdiction.