Governor JB Pritzker’s proposed FY2023 State Budget directs funding to a number of public safety initiatives, including funding to implement Public Act 101-0652, known as the SAFE-T Act, signed into law by Governor Pritzker in February 2021. The sweeping criminal justice reform bill changes various policies and practices across the entire justice system including the courts, prisons and law enforcement agencies. The Civic Federation plans to release its full analysis of the Governor’s budget next week.

Based on the proposed FY2023 State Budget, four State agencies primarily are impacted by the SAFE-T Act: the Illinois Supreme Court, Illinois Criminal Justice Information Authority, Illinois State Police and the Illinois Law Enforcement Training and Standards Board. This blog post examines the FY2023 budget requests of these four State agencies and anticipated spending on implementation of the SAFE-T Act based on the proposed budget and a series of State appropriations hearings held by the Illinois General Assembly in both the House and Senate this session.

The Illinois Supreme Court’s FY2023 budget request of $545.7 million represents an increase of $51.8 million, or 10.5%, from the FY2022 enacted budget appropriation of $493.8 million. The increase in FY2023 is due to the creation of a new Office of Statewide Pretrial Services and other increases in operational expenses. Of the Supreme Court’s total FY2023 budget appropriation, 81%, or $398 million, accounts for statutorily mandated funding for 994 judicial positions, probation officers, salary reimbursements and circuit clerk stipends. The remainder of the budget supports 821 non-judicial staff positions, court technology (including mandated e-filing), administration and other court modernization costs.[1]

The Supreme Court’s budget has increased by 40.1% over the past five years, as shown in the chart below. 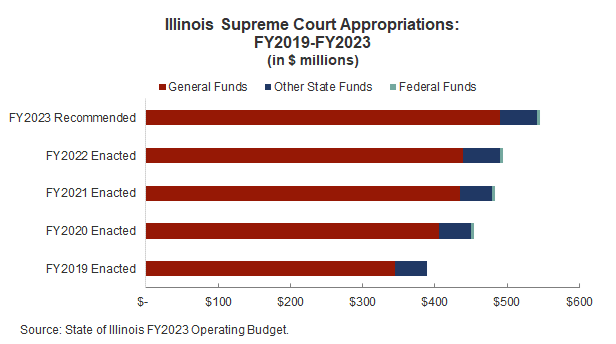 As noted in a previous blog post, the Illinois Supreme Court was tasked with pretrial data collection through oversight by a Pretrial Practices Data Oversight Board. To enable data collection from local county agencies, the judicial branch purchased a technology platform at an estimated cost of $1.6 million.

In anticipation of the new pretrial release procedures outlined in the pretrial portion of the SAFE-T Act, known as the Pretrial Fairness Act, which take effect January 1, 2023, the Administrative Office of the Illinois Courts has established a new Office of Statewide Pretrial Services to oversee pretrial services. The office will handle bond reports and risk assessments, as well as pretrial supervision of criminal defendants who are released pretrial. The establishment of this new office is estimated to cost $26 million in FY2023. This will fund a total of 165 new positions and associated operational expenses for the office. In its first year, the office will provide pretrial services in 63 counties that currently do not have pretrial services operations. FY2023 represents year one of a three-year phased plan to establish statewide pretrial services. The headcount could grow as the Office expands to include other counties that already have more established pretrial services operations.

The new office will bring the 63 phase one counties into compliance with the Pretrial Services Act, which took effect in 1987 and required all counties to establish a pretrial services agency. Since then, many have gone without pretrial agencies, leaving gaps in services across the state.[2] Across these 63 counties, there were 33,093 criminal case filings in 2019. During 2023, the Office of Statewide Pretrial Services anticipates preparing approximately 27,000 bond reports and risk assessments and supervising approximately 19,000 defendants.

The Illinois Criminal Justice Information Authority (ICJIA) supports the administration of criminal justice in Illinois through research, data, policy analysis and grant making. The ICJIA budget request across all funds for FY2023 totals $454.1 million, which is an increase from the prior year of $87.7 million, or nearly 24%. ICJIA’s General Funds proposed appropriation is $78.4 million, an increase of $25.3 million, or 47.7%, over FY2022 enacted appropriations. Other State Funds appropriations of $157.0 million represent an increase of $71.0 million, or 82.7%, over FY2022. Federal Funds will decrease slightly, by approximately $9 million, from the prior year budget.

The increase in FY2023 accounts for a $20 million deposit into the Gang Crime Witness Protection Program Fund, $18.9 million for violence prevention grants, a $4.3 million increase in the appropriation for community-based violence prevention programs and $545,000 for the administrative support to the Innovations Institute, a capacity building grants initiative. These increases are partially offset by other decreases in grant allocations in FY2023. It also accounts for a $50 million increase in spending authority for the Restore, Reinvest and Renew (R3) Program, which will allow for additional grants to be awarded and flexibility in administering those grants. The R3 program was established with the legalization of recreational cannabis to direct cannabis tax funds to communities most impacted by economic disinvestment, violence and the war on drugs.

Appropriation levels for ICJIA from FY2019 through FY2023 are shown in the chart below. The ICJIA budget has increased by nearly $300 million, or 187%, over the past five years. 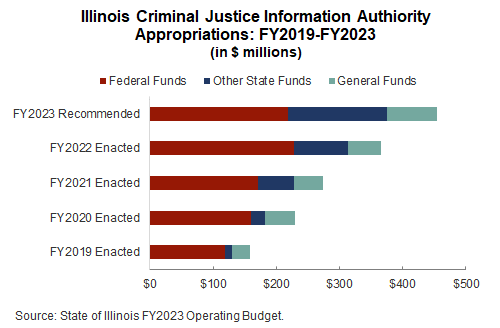 Last year, the FY2022 Illinois State Budget accounted for an additional $1 million for ICJIA to

implement various requirements of the SAFE-T Act, including:

The FY2023 appropriations for ICJIA sets aside $600,000 for contingent expenses associated with the SAFE-T Act.

The Illinois State Police budget request for FY2023 is $795.7 million. This represents an increase of $62.3 million, or 8.5%, over the FY2022 enacted appropriation. The increase in FY2023 accounts for an additional $18.6 million in general funds to support three cadet classes to hire and train 300 new sworn troopers, $5.4 million to fund a new Decatur Forensic Laboratory, an additional $4.5 million for motor vehicle and body cameras and cloud storage, as well as additional funding for the Firearm Owners Identification (FOID) program.

The Illinois State Police headcount was 2,836 in FY2022, consisting of approximately 1,800 sworn officers and 1,000 civilian employees. Headcount will increase to 2,978 in the FY2023 budget proposal.

The Illinois State Police budget has increased steadily over the past five years from $658.3 million to $795.7 million, an increase of 20.9%. 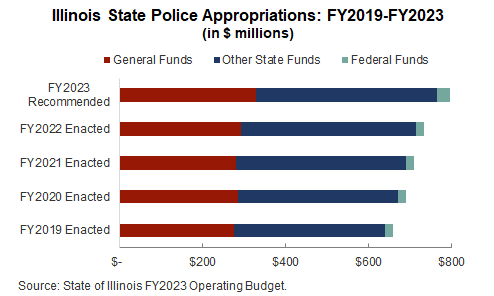 One of the requirements passed in the SAFE-T Act was for all officers across all law enforcement agencies in Illinois to wear body cameras. The deadline for the State Police Department to implement body cameras is January 1, 2025. The FY2022 State budget included $2 million for the State Police to begin this phased-in implementation of body cameras and to cover the cost of data storage. This allowed for the purchase of 500 cameras and cloud storage space to keep records for 90 days, as required by law. The FY2023 budget provides another $4.5 million resources for an additional 550 cameras and cloud storage.

The Illinois Law Enforcement Training Standards Board (ILETSB) budget request for FY2023 is $86.1 million, which is an increase of 68.7%, or $35.0 million from the FY2022 appropriation of $51.0 million. Last year, ILETSB’s FY2022 enacted budget appropriation increased by $23.5 million, or 85.5% from $27.5 million in FY2021. The increases in the ILETSB budget in FY2022 and FY2023 are in order to comply with new requirements included in the SAFE-T Act, which are discussed further below. Over the past five years, the ILETSB budget appropriations have increased by more than 250%. 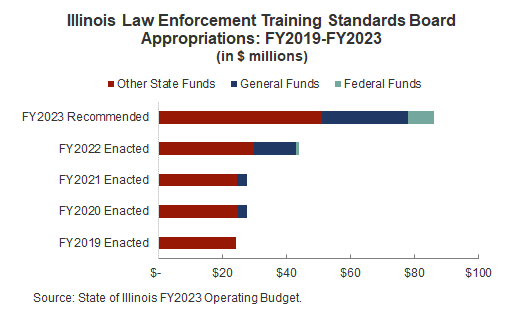 The SAFE-T Act contains several new requirements for the Illinois Law Enforcement Training Standards Board including additional training requirements for law enforcement officers, creation of web portals to improve transparency and information sharing between law enforcement administrators, the creation of a Certification Review Panel to oversee the decertification process, and a new process for the Board to accept complaints against officers. In FY2022 ILETSB estimated it would need an additional 15 staff members, increasing headcount from 25 to 40 positions. The FY2022 budget requested $26.2 million for training grants and reimbursements to local agencies, compared to $16.2 million in previous years.

The FY2023 budget request increases ILETSB’s headcount by another 26 staff positions to a total of 66 positions. The spending level within the General Funds will increase by $13.6 million from FY2022 levels. The FY2023 budget request includes an additional $10 million appropriation for operational expenses associated with the SAFE-T Act within the Law Enforcement Training Fund, and an additional $10 million to the Camera Grant Fund, which will increase from $3.4 million in FY2022 to $13.6 million in FY2023. This funding will provide additional resources to local law enforcement agencies through grants for body cameras and motor vehicle cameras.