Illinois Governor JB Pritzker’s fourth budget recommendation proposes taking advantage of a stronger than expected economic recovery to fund supplemental spending and additional pension contributions in the current year, along with plans to rebuild the State’s meager rainy day fund. The balanced spending plan starkly contrasts projections made when the current FY2022 budget was approved in June 2021, as well as in November 2021 updated projections, which at the time showed a deficit for FY2023. This blog post will provide a summary of the Governor’s proposed FY2023 budget. The Civic Federation plans to release its full analysis of the budget later in March.

The recommended $45.4 billion General Funds operating budget, which was presented on February 2, 2022, is $1.6 billion, or 3.4%, below estimated FY2022 spending of nearly $47.0 billion. The FY2022 total expenditure number includes $1.6 billion in proposed supplemental agency appropriations. An increase in Agency Expenditures in FY2023 over FY2022 is offset by the fact that the State made expenditures in FY2022 to pay off Municipal Liquidity Fund borrowing and interfund borrowing that it will not need to make in FY2023, as well as the aforementioned proposed supplemental appropriations for group health and other items. Total State revenues are projected to decrease with reductions to net corporate income taxes, net sales taxes and federal revenues, offsetting an increase in personal income tax collections projected for FY2023.

Given large projected surpluses in FY2022 and FY2023, the Governor proposes to use some of the funds to make $500 million in supplemental pension contributions and contributions to rebuild the State’s Budget Stabilization Fund with $600 million in FY2022 and another $200 million in FY2023. The Governor also proposes a number of changes intended to provide tax relief to residents, including $475 million in property tax rebates, a freeze in grocery sales taxes and a suspension of the scheduled automatic increase to the gas tax.

The following table compares the Governor’s proposed budget plan for FY2023 with the estimated budget results for FY2022, including proposed supplemental appropriations. 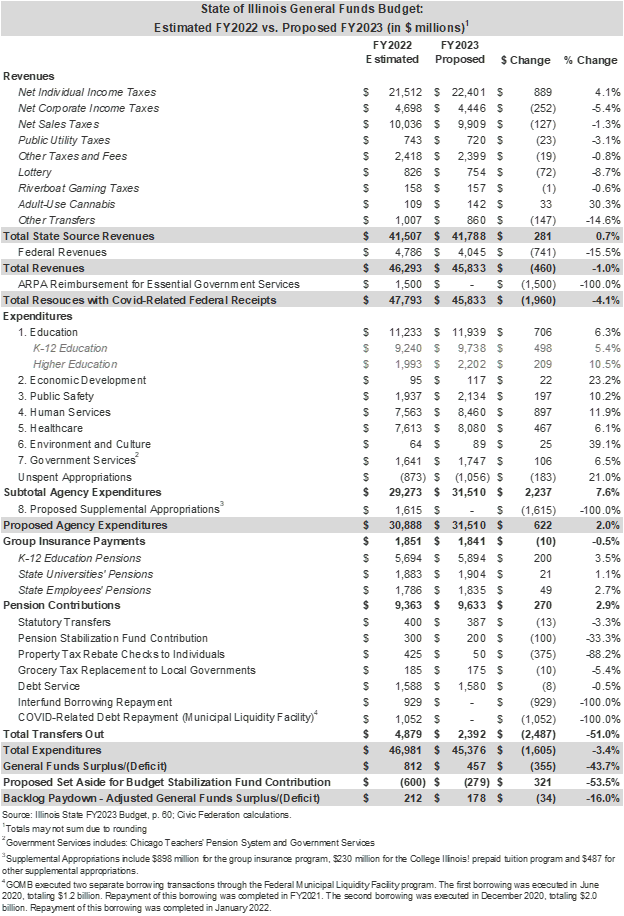 The revenue estimates for both FY2023 and FY2022 have been significantly revised upward twice: first in November 2021 and again in February 2022 in the Governor’s budget. The revisions are based on performance during FY2022 to date. Projected General Funds revenues for FY2023 have been increased by nearly $3.5 billion from the State’s expectations in June 2021 and FY2022 revenues by $3.3 billion.

Projections for net individual income tax revenues in FY2023 total $22.4 billion, which is $889 million, or 4%, above the FY2022 year-end estimates. The growth is based on projections of continued economic growth in Illinois and around the United States, connected to decreasing COVID-19 infection rates.

The net corporate income tax revenue forecast shows a 5.4% decline from FY2022 estimates, from $4.7 billion to $4.45 billion. Corporate income tax revenues have continuously exceeded forecast projections for FY2022, increasing $836 million (46%) in the first half of FY2022 compared to FY2021. Forecasts by the Governor’s Office of Management and Budget (GOMB) in the budget book attribute this strong performance to increased economic activity from the federal stimulus and changes in consumption patterns to goods from services, which GOMB says has increased profits for certain corporate taxpayers. Additionally, corporate tax treatment changes proposed by the Governor and included by the General Assembly in the enacted FY2022 budget have expanded the amount of corporate income that is taxable. However, corporate income taxes are expected to decline in FY2023 in part because of the fading of federal stimulus effects on the economy and because a portion of FY2022 revenues were shifted from FY2021 and such a shift is not expected to recur.

Compared to FY2022 estimates, net sales tax revenue for FY2023 shows a slight decline – decreasing by $127 million or 1.3% from $10 billion to $9.9 billion. Net sales tax revenues increased 14% in the first six months of FY2022 compared to FY2021 and have been strong throughout the pandemic due to consumers shifting their spending from services, which are mostly not taxed by the State, to goods, which are. Additionally, federal stimulus and enhanced unemployment meant consumers had more money to spend. However, the State’s projections indicate slower growth through the second half of the fiscal year, followed by a $127 million (1.3%) reduction from FY2022 as consumers are expected to shift back to services spending. Another reason for the decline is an increase in amount of sales taxes on motor fuel that are statutorily required to be transferred to the Road Fund in FY2023, which reduces deposits into the State general fund by a projected $108 million. In addition, the Governor’s proposed budget includes a recommended one-year moratorium on the 1% state-imposed sales tax on groceries beginning July 1, 2022. The freeze would not impact state revenues since receipts are passed on to local governments. The Governor accordingly proposes to reimburse local governments for $360 million in foregone revenue.

Adult-use cannabis revenues are expected to generate an additional $33 million from estimated FY2022 numbers. Forecasts are based on year-to-date statewide sales and on the market performance of legal adult-use cannabis in other states, which indicate potential volatility within the first few years of legalization. However, the Governor is proposing a shift in allocation patterns of receipts collected in the Cannabis Regulation Fund, increasing the share allocated to the Budget Stabilization Fund from 10% to 25% and decreasing the share allocated to the General Revenue Fund from 35% to 20%.

Federal revenues are projected to decline by $741 million or 15.5% to $4.0 billion, with the decrease primarily attributed to the expected end of enhanced pandemic Medicaid match payments after the first quarter of FY2023.

Agency spending—excluding group insurance payments, pension contributions, required transfers for debt service and other purposes, and the FY2022 proposed supplemental appropriations—will increase by $2.2 billion, or 7.6%, to $31.5 billion in FY2023 from $29.3 billion in FY2022. Proposed FY2023 net agency spending is higher than FY2022 due to increased funding for all areas of agency spending, especially for Education, Economic Development, Human Services and Environment and Culture.

The budget proposes an additional $498 million for preschool to secondary education, which includes a $350.2 million increase for the State’s evidence-based funding formula. An additional $54.4 million is included for the Early Childhood Block Grant program, which will reach approximately 7,100 additional children.

Proposed higher education funding in the General Funds increases by $209 million, or 10%, in the FY2023 budget to $2.2 billion from $1.9 billion in FY2022. The proposed increases include an increase of $122 million to the Monetary Award Program (MAP), which provides need-based financial aid to students. About $68 million is for increased funding for public university and community college operations. There are also additional investments of $2.5 million for Adult Education and Career and Technical Education and $2.3 million for the Minority Teacher Scholarship Program.

Proposed General Funds appropriations for human services increase by $897 million, or 11.9%, to nearly $8.5 billion in FY2023 from approximately $7.6 billion in FY2022. The proposed budget includes $140 million to fund Behavioral Health provider rate enhancements through the Department of Healthcare and Family Services and the Department of Human Services. Another $150 million will be appropriated for the implementation of the Pathways to Success Program for Medicaid-enrolled children with mental illnesses.

Spending for the State Employee Group Insurance Program (SEGIP) has decreased since FY2019, which the Governor’s office attributes to cost savings included in collective bargaining agreements and negotiations with vendors. For the proposed FY2023 budget, group insurance payments will decrease by $10 million, or 1% from $1.85 billion in FY2022 to $1.84 billion in FY2023. However, a large portion of the supplemental appropriations the Governor is requesting for FY2022 are intended to pay down the health insurance bill backlog attributed to underfunding for SEGIP in past years.

Governor Pritzker’s FY2023 budget proposal also pledges an additional $500 million to be contributed to the systems in FY2022 and FY2023 in addition to the certified amounts. If enacted, the additional contributions will mark the first time since the 50-year funding plan was implemented in 1994 that the State will make more than the statutory requirement. The Governor’s Office projects that the contributions will save taxpayers approximately $1.8 billion by FY2045.

Between FY2020 and FY2021, the United States Congress enacted six pieces of legislation to address the impact of COVID-19. In total, approximately $52 billion is expected to be directed to the State of Illinois and its local governments to address COVID-19 response needs. This amount does not include stimulus checks to households, unemployment insurance assistance or the Paycheck Protection Program for small businesses. In March 2021, the American Rescue Plan Act became law and the State received approximately $8.1 billion through the Coronavirus State Fiscal Recovery Fund, which is required to be obligated by 2024 and spent by 2026.

About $2.8 billion from the Coronavirus State Fiscal Recovery Fund was appropriated in FY2022 for key areas such as infrastructure, violence prevention, education, healthcare, affordable housing and economic recovery. The FY2022 budget plan also reserves $1.5 billion to replace lost revenues to the State and fund essential government services as allowed under the American Rescue Plan. The FY2023 budget proposal includes $235 million in appropriations to support violence prevention programs through the Reimagine Public Safety Act. It also request $350 million for the Illinois Emergency Management Agency, Department of Corrections and Department of Human Services for State operational appropriations.

If the Governor’s proposed supplemental pension contributions, tax changes and rainy day fund contributions are implemented, the State is projected to end FY2023 with a $178 million surplus. The FY2022 projected year-end budget surplus of $1.7 billion has been partly directed to paying down short-term debt, and the Governor has also requested supplemental appropriations and rainy day fund contributions. If enacted, the additional spending would reduce the FY2022 surplus to $212 million.

In recent years, substantial progress has been made in reducing the State’s bill backlog. The Comptroller’s Office estimated that by the end of 2021, the General Fund and Health Insurance Reserve Fund bill backlogs totaled $4.225 billion, down from $16.7 billion in 2017. By January 31, the Comptroller’s estimates for accounts payable/borrowing totaled $3.6 billion, with the remaining debt primarily comprising bills under 30 days and other state account transfers. According to the Governor’s budget, if the supplemental appropriations for FY2022 are approved, projected FY2023 year-end accounts payable debt would be reduced to $2.7 billion. The reduction in outstanding bills has also reduced State spending on late payment interest penalties by $260 million per year compared to what the State was paying during the 2015-2017 budget impasse, when the backlog reached a peak of $16.7 billion.