With new data released by the Office of the Chief Judge of the Cook County Circuit Court earlier this year, a more complete understanding of the number of people confined to electronic monitoring, or home confinement, in Cook County—and the types of crimes they are charged with—is now available.

The Chief Judge’s Adult Probation Department runs a separate curfew program through the Home Confinement Unit. This program monitors individuals using a radio frequency ankle device to monitor both pretrial defendants and individuals who have been convicted and are on probation or conditional release. Individuals in this program must be in their home from 7 p.m. until 7 a.m. There were 817 people ordered to the curfew program as of May 13. Approximately 85% of people in the Chief Judge’s curfew program are pretrial defendants according to the Circuit Court website.

Regardless of the entity operating each program, judges determine which pretrial defendants are ordered to electronic monitoring. The Sheriff’s EM program handles the highest risk pretrial defendants, while the Chief Judge’s curfew program is used for lower risk defendants.

The chart below shows the composition of the Chief Judge’s Home Confinement Unit curfew program based on data available between December 31, 2021 and May 20, 2022 by type of charge. The majority of people ordered to this program—approximately 46%—are charged with firearm possession.[1] Drug charges account for the second most frequent types of charges, making up 12.5%, followed by violent charges at 11.8%.[2] 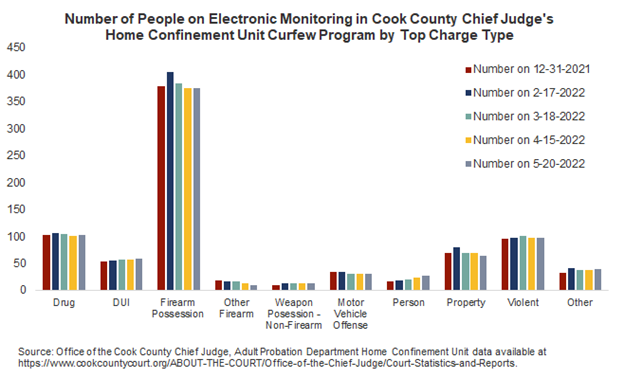 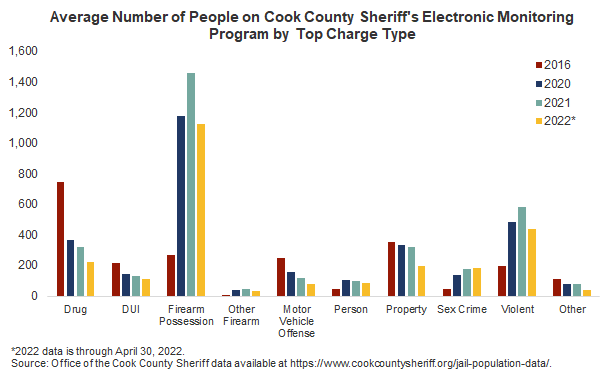 Similar to the Chief Judge’s curfew program, firearm possession is the most common top charge among those ordered to the Sheriff’s EM. However, there have been some shifts in the number of charges among those ordered to EM. The number of people on EM charged with firearm possession has increased significantly since 2016, while the number of people on EM with drug charges has decreased since 2016. The number of people charged with crimes classified as violent has also increased while other nonviolent charges have decreased. Because electronic monitoring is highly restrictive, it is considered appropriate in cases when an individual presents a high level of risk based on a pretrial risk assessment or would otherwise be ineligible for release. It is not considered to be appropriate or effective in low-level, nonviolent cases. Additionally, many judges in Cook County require pretrial defendants to post monetary bail in order to be released to home electronic monitoring.

The Chief Judge’s Home Confinement Unit budget for FY2022 is $11.1 million, unchanged from the prior year. The number of personnel decreased from 85 full-time equivalent positions in FY2021 to 72 in FY2022. The Home Confinement Unit budget composes 20.5% of the Adult Probation Department budget, and 4.6% of the Chief Judge’s total $294 million budget.

[1] The most common firearm possession charge within this data set is aggravated unlawful use of a weapon, which means that a person carried or possessed a gun illegally (this does not include instances when a person pointed or discharged the firearm). There are numerous factors which constitute illegal gun possession laid out in Illinois statute: 720 ILCS 5/24-1.6.

[2] The most common violent charge within this data set is aggravated battery. There are numerous factors which constitute an aggravated battery, with and without the use of a firearm, laid out in Illinois statute: 720 ILCS 5/12-3.05.