The Civic Federation recently released its analysis of the Chicago Public Schools proposed FY2023 budget. The Federation opposed the budget because the District has not provided sufficient justification for raising its property tax to the maximum amount allowed under the Property Tax Extension Limitation Law (PTELL) at a time when taxpayers already face serious economic strains and when CPS has alternative options available. Despite opposition to this aspect of the budget proposal, the Federation commended the District for making progress on improving its financial stability. Among other positive elements, the Federation highlighted the District’s improved level of operating reserves.

CPS’ financial audits through FY2021 show improvements in the District’s reserves through the measure of “unrestricted” fund balance (fund balance without any spending constraints) as a percent of general fund expenditures. This ratio is a measure of whether a government is maintaining adequate levels of fund balance to mitigate current and future risks and ensure stable tax rates. Unrestricted fund balance consists of committed, assigned and unassigned components of fund balance as reported on a government’s balance sheet. It is recommended by the Government Finance Officers Association that governments maintain two months of operating expenditures in order to mitigate fluctuations in revenue (16.7% of annual expenditures).

The District’s unrestricted fund balance fell from a high of 18.5% of expenditures in FY2012 to negative levels in FY2016 and FY2017. This was due to the State of Illinois budget crisis and the District’s own pension funding crisis, which prompted CPS to dip into its reserves to close operating budget gaps without having to make budget cuts. The District completely depleted its General Fund operating reserves but has since begun building them back up. The adoption of Evidence-Based Funding in FY2018 and increased property tax revenues to fund teacher pensions have increased the District’s revenue and helped stabilize the CPS budget. In FY2018 the unrestricted fund balance was restored to a positive balance of $261.7 million, or 4.7% of General Fund expenditures. The District’s level of reserves has increased since then, most recently to 11.4% of General Fund expenditures in FY2021.

Federal COVID-19 relief funding approved in 2020 and 2021 through ESSER I, II and III also allowed the district to continue increasing its level of reserves. 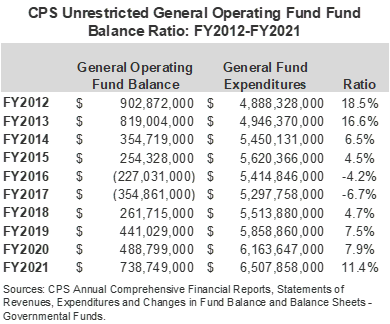 While the Annual Comprehensive Financial Reports from CPS only provide information about fund balance through FY2021, as shown in the table above, the CPS budget provides information about the District’s projected fund balance levels in FY2022 and FY2023 for the total General Operating Fund, shown in the table below. The General Operating Fund includes the unrestricted portion discussed above, as well as all the other components of fund balance.

The fund balance amounts shown in the table below are based on the District’s own fund balance policy. The policy establishes a target fund balance level for its general operating funds, referred to as the stabilization fund. The CPS policy requires the Board to maintain an assigned fund balance totaling 15% of the operating and debt service budget (net of any budgeted non-cash expenditures or budgeted expenses derived from the dedicated Chicago Teachers’ Pension Fund property tax levy) in each year. Based on the policy, the District’s target is $1.2 billion in reserves.

In FY2022, CPS began the year with a General Operating Fund balance of $803.8 million and used $10 million of fund balance to cover operating expenses. CPS expects to end FY2022 with a $228.8 million surplus, bringing its estimated beginning balance in FY2023 to $1,032.6 million. This is just short of CPS’ target level of 15% of operating expenses, or $1.2 billion. CPS acknowledges that it will need to continue building its reserves over time to meet the target and will not use any of its fund balance in FY2023 to balance its budget.

On June 23, 2022, Cook County Board President Toni Preckwinkle issued a preliminary budget forecast for fiscal year 2023. The fiscal year begins December 1, 2022 and ends November 30, 2023. The report provides end-of-year estimates for the current 2022 fiscal year and a forecast for the upcoming...

CPS student enrollment has been declining annually for the past two decades. In a recent analysis of the Chicago Public Schools proposed FY2023 budget, the Civic Federation highlighted this trend. Specifically, the Federation...

On June 23, 2022, Cook County Board President Toni Preckwinkle issued a preliminary budget forecast for fiscal year 2023. The fiscal year begins December 1, 2022 and ends November 30, 2023. The report provides end-of-year estimates for the current 2022 fiscal year and a forecast for the upcoming...

CPS student enrollment has been declining annually for the past two decades. In a recent analysis of the Chicago Public Schools proposed FY2023 budget, the Civic Federation highlighted this trend. Specifically, the Federation...